Band Links:
Hamilton, Ontario’s Rarity have developed into a powerhouse in the local punk and hardcore scenes in the Hammer and surrounding areas, and they recently made a very specific imprint on their hometown with a pop-up parking lot show. Fresh off their newest album, The Longest Lonesome, the quintet has moved into heavier, darker territory, but they still maintain the trademark bite that makes them who they are.

If you’re unfamiliar with the group, check out our feature, In Conversation with Rarity, from July to get some background info. Distilled down: Rarity are crushing it. And in true punk rock fashion, the boys join us for a guest blog to share some photos and footage from their killer parking lot show in Hamilton. Basically, they set up and hammered out some scintillating hardcore until the cops shut it all down.

Rarity battle through “A Numbness.”


On the show’s genesis and execution, Rarity gives us the following:

“It all came from the idea that we needed to give Hamilton some special way to celebrate the release of The Longest Lonesome. Hamilton inspired all the songs on this record, as well as the imagery, so one of our first ideas was to take it to the streets in some way. We needed a generator, a ton of planning and a little bit of luck that we wouldn’t get shut down the second we rolled up.

Once we decided the billboard was the place to do it, we couldn’t go back. We were too excited at that point. No permits, just a van full of gear, a parking lot and more people than we ever thought would show up. We couldn’t promote the show, the best we could do was direct everyone to the website and hope word of mouth took over. Undoubtedly one of the coolest shows we’ve ever played; one we will never forget.” 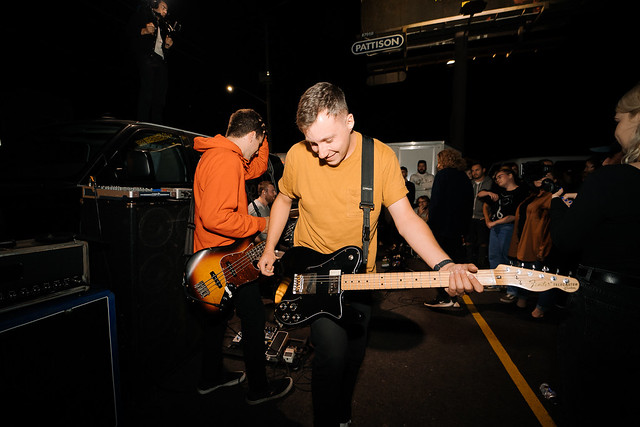 Check the boys in action here.