Guest Blog: THE SLYDE Reflects on a Decade of Music with Their 10 Favourite Career Highlights

Band Links:
Rising seemingly out of nowhere, The Slyde may be Toronto’s most significant metal band of 2019. The group surfaced in a major way this year, thanks to their epic victory at the 2019 edition of Wacken Metal Battle Canada, an annual competition where one victorious act is given the opportunity to play in front of a huge audience at Germany’s Wacken Open Air festival. A melodic, progressive metal quintet, The Slyde delivered and outlasted every competitor to emerge as Canada’s most noteworthy emerging metal band.

The buzz surrounding The Slyde began to mount even before the Wacken victory, largely as a result of their 2018 album Awakening (stream/buy now via varous formats). A thought-provoking, high-energy metal journey, Awakening is a ten-track travel through progressive hard rock that may be of most interest to fans of bands such as Rush, Dream Theater, Haken, Coheed and Cambria, and Megadeth. The Slyde is a model of hard work and dedication, gaining the opportunity to play somewhere around 200 shows, which has included appearances at strong>Ottawa Bluesfest, Canadian Music Week, IndieWeek, and Cornwall Lift-Off.

As a special guest blog exclusive to PureGrainAudio, The Slyde have provided us with their TOP 10 favourite moments that have occurred thus far in their short, yet still emerging career.

To accompany the 10 moments listed below, The Slyde provided this awesome gallery of photos: 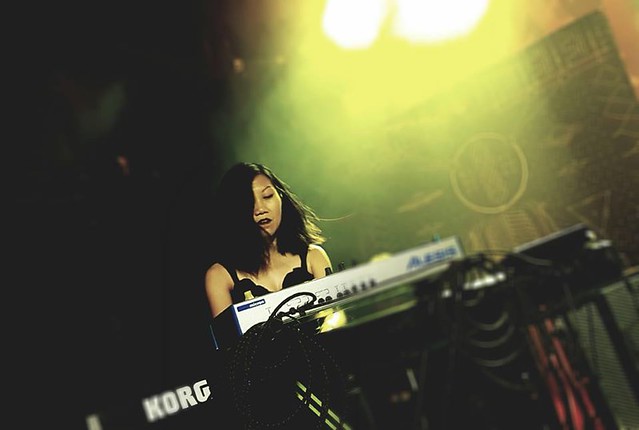 01. Ottawa Bluesfest 2010
- This was our first taste of a big stage, big crowd, big festival, etc... So this show meant a lot to us. Also, we played on the same day as Rush, so that's pretty cool.

02. Brendan Soares joining the band, first show with him December 2010
- Brendan and Nathan grew up together and played music during our high school days, taking music classes together and rocking out to Metallica, Rush, and Dream Theater songs in Brendan's basement. When Brendan joined the band in late 2010, it was a turning point in the band's focus in songwriting, and the live show improved 100 percent with Brendan's solid musicianship behind the kit, and powerful playing.

Here's a live clip of the first time Brendan played with the band in Cornwall, Ontario in 2010:


03. Releasing debut full-length Feed The Machine
- Speaking of change in songwriting, our 2011 album Feed The Machine established a more focused and thought-provoking musical effort, discussing topics relating to environmentalism and politics. For the first time, we felt like a "real" band, as we were no longer experiencing creative and personal differences that we had prior to Brendan joining the band.

Listen to the title track from Feed The Machine:


04. Ottawa Bluesfest 2011
- Bluesfest 2011 was a huge step up from the 2010 experience we had. We had Brendan behind the kit now, played a bigger stage and better time slot, and as a result, a much bigger crowd. We played a 75-minute set, including all of Feed The Machine front to back and our back catalog. And we hung out with the beautiful Dana Fuchs backstage (who played right after us), and she and her band were so nice to us.

Watch this live clip of The Slyde performing "It Was My Pleasure" at Bluesfest, 2011:


05. Releasing our 2012 EP New World Sympathy
- This is our favourite release thus far. Even though it's only four tracks, they are all fan favourites, including our song "Lies." In addition, the audio production done by Eric Disero on this EP (as well as Feed The Machine) sounds fantastic.

Listen to "Lies" off of New World Sympathy:


06. 2013 Wacken Metal Battle Prelim Round Win
- Before we did this competition, we were fairly unknown to the Toronto metal scene. Having just relocated to Toronto from Ottawa in 2012, and given our crossover and multi-genre elements, the metal community has always been a little reluctant to accept us. That being said, winning the first round and advancing to the Ontario Final at the 2013 Wacken Metal Battle Canada competition felt really good to us at the time.

This is a live clip of The Slyde performing at Toronto's The Rivoli in 2013:


07. Alberto Campuzano Joining the Band; First Show with Him in August 2016
- In late 2013, our longtime bass player Nick Favretto left the band to pursue an education, and that triggered a two-year hiatus for us. Fast forward to September 2015, when we went to see Brendan play drums with a Toronto metal band called Warmachine at The Mod Club and met their bass player Alberto that night. Luckily for us, Al was a huge fan of The Slyde, saying he immediately loved our New World Sympathy EP when Warmachine frontman Joe showed it to him. Shortly after, Alberto tracked bass guitar for what would be our "comeback" EP (aptly named), Back Again. We played our first show in over two years at The Hideout on August 3rd, 2016, with Alberto.

08. Opening for Angra, September 2018
- Inertia Entertainment in Toronto gave us the opportunity to open for Brazilian metal band Angra on September 17th, 2018. This further showcased what we offer to the metal scene in Toronto, and it was certainly a highlight show in our career. As an additional note, at this point, Andrew Suarez became a full time live drummer with us, and we couldn't have asked for anyone else to fill Brendan's shoes.

This is "Fading" live from The Mod Club Theatre opening for Angra in Toronto last fall:


09. 2019 Wacken Metal Battle National Final
- After being eliminated in the 2013 Metal Battle, we entered the 2019 competition with a pretty laid back mindset. We treated the competition just like any other show and didn't think too much about the stakes. Perhaps that's what helped us get to the National Final at Dickens Pub in Calgary, Alberta. It was our first time playing in Western Canada so it will always be a memorable show for us. And, we also won the competition that night!

10. Wacken Open Air 2019 in Germany
- To say that we were stoked to play in Germany at Wacken is a bit of an understatement. Definitely the highlight of our ten-year career, as our goal since day one has always been to break into the European markets. This gave us the much-needed chance to do so, and now that we've had a taste of it, we're even more hungry to make touring in Europe a reality.

Check out this video of the band performing “So Blind” at Wacken Open Air:

The 10 Best Modern Horror Movies According to ORPHANS OF DOOM