Band Links:
Cold Reading have thrown a curveball at you, so to speak. If you thought you had the band figured out after the release of their debut record Fractures & Fragments, think again. Like any group with a grander vision, Cold Reading has completely shaken things up with their sophomore release, a concept album titled ZYT that will play out over the course of three EPs. The three EPs (stream/purchase here) are titled Past Perfect, Present Tense and Future Continuous, respectively, and bound together, they all form ZYT, a record that explores the subject of time from different perspectives.

As the EPs’ titles may indicate, they each look at the past, the present and the future. Past Perfect examines the human tendency to glorify the past and mourn missed opportunities, as so many do. Present Tense is firmly rooted in the here and now. It’s about the here and now of living in the moment and the difficulty of finding a reasonable approach to the past and future. Future Continuous outlines possible upcoming scenarios with the backdrop of the uncertainty but, at the same time, the hope that future times may bring.

With this ambitious trilogy, Cold Reading has created an expansive, multi-layered extended work that extends well beyond what you get in a conventional album. The storytelling and depth of these releases is truly remarkable and the band has created perhaps their most ambitious work yet. In honour of ZYT, the band joined us for a special edition of Stereo Six to list the albums that helped shape them into the musicians they are today.

Listen to the recently-released “Tree Diagram.”

Alain: When Foals announced that they were going to release a new album I was obviously really amped up! Not only were they one of the first bands that got me into indie/math rock, but also one of the pivotal acts when it comes to my guitar playing. When they first released Antidotes I was astonished by the way they reinvented guitar music. Their sparkling, mathy guitars and unconventional rhythms were just something else! Therefore, it doesn’t come as a surprise that Everything Not Saved Will Be Lost - Part 1 really reminded me a lot of old Foals, which I obviously found very pleasing. “On The Luna“ is easily among the best songs the band has ever written. I mean, what a riff, right?! I also really like the production of the album as it sounds rawer and ‘rock n’ roll’ than the previous records. As much as I love Part 1, I wasn’t a big fan of Part 2. It feels they were trying to write a stadium rock album with this one...

Chregi: Ever since the release of his extraordinary second album, Ben Howard’s playing has been a rather big influence on me. He’s a brilliant guitarist but doesn’t have to shove it down your throat, the effects he uses are so tasteful and he’s an amazing songwriter. On another level, I really respect him for doing what he wanted to do. Instead of doing another breezy folk-pop album like his debut, he took some artistic and commercial risks and wrote a dark and moving album that I still love.

Have a gander at the slick cover artwork for the six albums Cold Reading outlined: 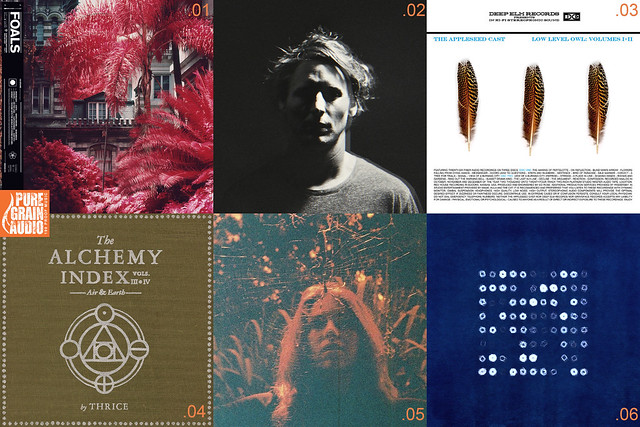 Marc: I’ll go with Low Level Owl (both volumes!) by The Appleseed Cast. For one, it’s my lonely desert album. The mixture of post-rock, emo, indie, ambient, and whatnot really hits a sweet spot. I love how there are some epic tracks, some catchy songs, some experimental soundscapes, some rudimentary fragments, but they all come together in one cohesive juggernaut of a double album. Additionally, there are too many inspiring drum tracks on that thing to count, and the drum production is insane. Well, this applies to all Appleseed albums with Cobra on the drums, that guy’s a legend in my book.

Mike: For quite some time I had this idea of creating a concept album in my mind. Records like Thrice’s The Alchemy Index keep fascinating me for a very long time. I loved the idea of setting the four elements to music. But a concept album to me is more than just music. It’s art. It’s like music in the shape of a book.

Check out the video for “Books & Comfort” from 2017’s Sojourner EP.

Thuri: There is probably no other record I have been listening to on such a regular basis since its release like Peripheral Vision. I’ve been a fan of Turnover (and all the similar bands) since their debut EP in 2011, and I think they were the first band I was following every step of whilst growing with them. Also, the bass sound and play-wise on this record definitely influenced my own playing.

- When things go wrong or get stressful on the road (traffic, navigation problems, endless drives etc), someone in our van will suggest to listen to some Ólafur Arnalds. It calms our nerves! Most of us have a soft spot for that ambient-electronica-classical sound, and re:member is another stellar record by Ólafur. While you won’t hear any direct influence on our album, it certainly had an influence on our mindset and our songwriting. Our desire to create calmer, more textured music springs from listening to stuff like that, even if we haven’t gone all the way (and maybe never will).