Stereo Six: The Albums which Made FLIGHT CLUB Soar on Their Newest EP ‘Recreational Love’

Band Links:
Flight Club is a five-piece group from Richmond, Virginia who blend soulful, dirty blues and rock ‘n’ roll roots with punk rock intensity and pop sensibilities; it’s a helluva mix. Their rollicking tunes are greasy in all the right ways, while the oft-clean vox are given room to shine without becoming too cutesy, and they throw in a healthy amount of throat-shredding yells to help out as well. The group just dropped their newest EP, Recreational Love (check it on Spotify and Apple Music), this month on Open Your Ears Records, and the six-track effort hops lucidly through the gamut of Flight Club’s signature sounds.

In honour of Recreational Love’s inaugural takeoff, the boys from Flight Club - Charlie, Sam, Alex, Harry and Drew - are dropping in for this Stereo Six segment. They run through one record each, and one as a collective band, that helped influence their newest EP in sound, style, theme, and attitude. Check out the release, enjoy their boisterous tunes, peruse the list of their recent influences, and get airborne with Flight Club. Take it away, guys.

Who knew “All Hell” could sound so good?


01. J Roddy Walson and the Business - Self-Titled (2010, Vagrant Records)
Drew: The self-titled J Roddy Walston and the Business album sounds timeless and has a big vocal presence throughout the record. Their songs are structured so the band as a whole sounds good and not a specific part. Stand out tracks are “Pigs & Pearls,” “Used to Did,” and “Don’t Get Old.”

02. Royal Blood - Self-Titled (2014, Warner Bros.)
Alex: Being my first time in the studio, I really dove into tones that I enjoyed and tried to find why I liked them so much. Listening to this album’s songs, like “Figure It Out,” are so easy to listen to and catch a groove, but sound so tough and rock ‘n’ roll at the same time. I think the goal for me was combing something that hits hard but is easy for anyone to get into no matter what their normal playlists consist of. Those lo-fi gritty tones feel so raw and natural, it’s just exactly what I was going for when I was looking for inspiration for the EP.

03. Harry Styles - Self-Titled (2017, Columbia/Erskine)
Charlie: One day while we were writing, Drew put on the song “Only Angel” to show us the progression of the song. I hadn’t heard it before but was immediately hooked. I asked who it was and was floored when the name Harry Styles came from his mouth. What I love about the record is the commitment to the sonic direction. It feels very authentic yet vintage. This is our first collection of songs other than a single that feature my vocals as the lead vocals. Before, I did mostly backing vocals and high harmonies. It was important for me to push myself and establish myself as a vocalist. Styles’ vocal range and ability to put such attitude behind his tracks was a huge inspiration for me. At 24, I never imagined myself becoming a Styles fan, but here we are.

Have a gander at the slick cover artwork for the six albums Flight Club outlined: 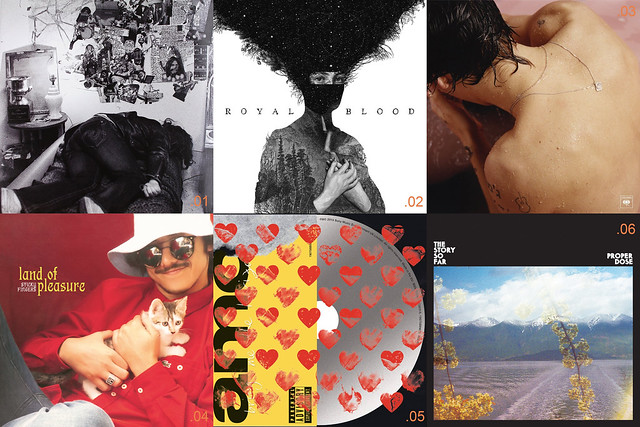 04. Sticky Fingers - Land of Pleasure (2014, Sureshaker)
Harry: It takes the listener through a complete cycle of emotion. Songs like “Feast Your Eyes,” “Just For You,” and “Lazerhead” have upbeat positive vibes and swells of sound that make you excited when the choruses kick in. Songs like “Rum Rage” and “Liquorlip Loaded Gun” all have a softer and slower placed sound but relate to anyone who is down and trying their best to keep their head above water. The drums are steady throughout the album and pick up the pace at all the right moments.

05. Bring Me The Horizon - amo (2019, Sony/RCA)
Sam: The progression of their sound was very inspiring, given that we are a band that is also trying to evolve. Seeing a group like that be able to redefine themselves with a new style, and to do it so well, helped boost my writing efforts in the studio.

06. The Story So Far - Proper Dose (2018, Pure Noise Records)
Collective: One thing we never want is for our music to grow stale. As musicians we want our music to grow with us and with our listeners. Proper Dose by TSSF was a record that showed us a band can break the mold cast by their previous releases. While there were songs that fit nice and neatly into their catalog, such as “Keep This Up” or “Need to Know,” there were some incredible stand-out tracks like “Take Me as You Please“ and “Upside Down” which showed the band can slow things down, add some tasteful keys, and strike a chord they hadn’t hit before.

With a New ‘Unplugged’ EP on the Horizon, BONES UK Are Ready to Make Their Presence Felt