Band Links:
British Columbia rockers Theory - aka Theory of a Deadman - have delivered another solid entry in their expansive discography with their their newest album, Say Nothing, which dropped days ago. The ten-track release has been extremely well received, with many already hailing it as the band’s best work to date. With the gripping singles “History of Violence” and “World Keeps Spinning” tackling heavy subject matter while showcasing the group’s evolved sonic flair, it feels as though Theory has grown wiser while maturely developing their melodic tendencies.

With the new album making waves, and a nineteen-year career to look back on, it seems like the perfect opportunity for the band to reflect on the formative music that made them the musicians they are today. In this rocking Stereo Six, guitarist Dave Brenner joins us to rundown the six albums - including one curveball choice - that defined his musical trajectory. Fans of ‘90s rock and grunge rejoice and enjoy this journey through Dave’s artistic development!

Theory knows that, as ridiculous as it gets, the “World Keeps Spinning.” For now.


01. Alice in Chains - Dirt (1992, Columbia)
- I credit this record with pushing me to learn guitar. Listening to this record, I realized there was something special to emoting through music. Listening wasn’t enough, I had to learn how to play these songs! I always felt like I knew what the song was about well before I heard any words. That the music alone could set that stage; it made me feel like the guitar had a voice!

02. Faith No More - King for a Day... Fool for a Lifetime (1995, Slash/Reprise)
- What I love about this record is how incredibly diverse it is. It covers so many styles and genres. It was exciting as a young music fan to see a band I admired so much push themselves in so many directions! It’s when I realized that bands didn’t have to be just one thing!!

Have a gander at the slick cover artwork for the six albums Theory outlined: 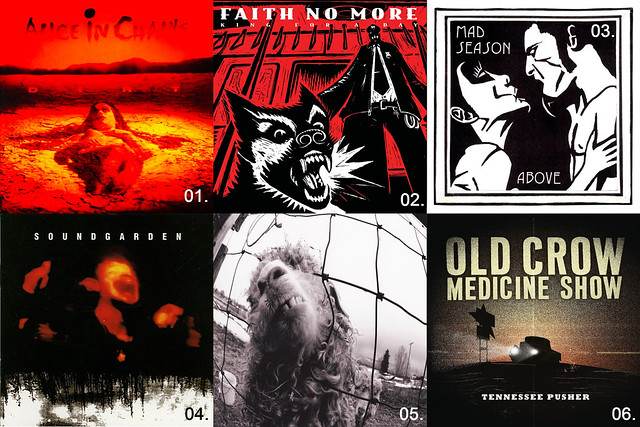 03. Mad Season - Above (1995, Columbia)
- I loved everything Layne Staley ever did! But there was a beautiful simplicity to this record with room for all of the band’s pieces to be heard. It’s exciting to see musicians play with other people outside of the bands you feel you know them in. To hear what Layne or Mike would do without their usual comfortable cast. It was an important record that encompassed an important part of their lives and you could feel it!

04. Soundgarden - Superunknown (1994, A&M Records)
- This was about as close as you got to a perfect record in my eyes. When I was finding my own taste in music, Soundgarden delivered this record that had so much amazing material. It felt experimental! There were all these wild guitar tunings, and the songs didn’t sound like anything I’d ever heard before! I remember hearing songs like “The Day I Tried to Live” and “Fell on Black Days” and thinking, why couldn’t I have written those riffs!? They were so good they almost sounded familiar the first time you heard them!!

05. Pearl Jam - Vs. (1993, Epic Records)
- This was the band I always felt like I wanted to be a part of. It felt like they made music in a room filled with gear and cables and scribbled words on pieces of paper on the floor, and they could capture that magic on tape! The music was so organic it felt like you were invited into their living room to listen to them perform it. I never undervalued what I thought their relationships to each other meant, and that has always been a driving force in my own band! Every record they made is my favourite of theirs, including this one!

06. Old Crow Medicine Show - Tennessee Pusher (2008, Nettwerk Records)
- The curveball choice. My bluegrass/old-time music influence came from very early on in my childhood but wasn’t rediscovered until well into my professional music career. I fell so hard for Old Crow. I put a little cover band together back home with some buds and we called ourselves the Tennessee Pushers. The simple way in which music creates a setting for a story to be told is such an art form! Songs like “Highway Halo” and “That Evening Sun” are perfect for wandering musicians!!

Experience a powerful trip through a “History of Violence” with Theory.