Band Links:
It doesn’t take a music genius to know that synth is such an open-ended term in music today. It can create very dark, new wave rhythms and atmospheres or it can be used to create poppier sensibilities. Brooklyn-based musician Jonny Couch has leaned towards the latter with his soulful, synth-laced pop that has earned him high praise for his style and originality. Couch can deliver both infectious rockers and soul-ridden ballads that are an offshoot of the power pop and new wave legends of the late 1970s and early 1980s.

You can hear it for yourself on Couch’s debut full-length record Mystery Man (order via Bandcamp here), released August 2nd via Damaged Sofa Records. To help him fully realize his sound, Couch secured the assistance of Twisty Cats frontman Peter Mavrogeorgis (Griderman, The National, Sharon Van Etten) as album producer and co-writer. The results speak for themselves with ten well-written and perfectly-produced tracks that emphasize the mastery of Couch’s songwriting and quirky charm.

Couch is more than just a songwriter though. He is also a personality with yearning vocals and an almost cartoonish look which aid him in embodying an easily likable anti-hero, wandering through his songs like a detective in over his head working on a case. Couch looked to both Body Heat and Body Double as some of his primary influences on Mystery Man and delivers equally romantic, dark and amusing lyrics. He has become a mainstay of the current New York indie scene with recent shows delivered in tandem with Paul Collins, The Plimsouls and many of the other new local area new bands creating a buzz.

Check out Jonny’s fun and original music video for the title track off of Mystery Man:


Truly original and one-of-a-kind, Couch stops at no end to deliver his very best, no matter what the venue or the conditions. His passion, humour and high musical intellect make Mystery Man one of the year’s biggest indie releases. As a true musical spirit and a deep lover and avid collector of vinyl, Couch has arrived to give us his five favourite record stores in his local Brooklyn neighbourhood as part of the second entry in our Vinyl Variety series. If you’re a vinyl addict and you live in New York City or are planning a trip soon, make sure to check out the five following record shops.

Jonny Couch: Hi, my name is Jonny Couch. I’m a solo artist living in Brooklyn, New York. When I’m not on stage singing my heart out, I like to sit down and listen to my rock n’ roll records. Loudly. I went on a mini-tour last weekend of super cool record shops in Brooklyn. There are a lot of great record stores in Brooklyn, but these are five of my favourites!

- Fun! This is a nice and massive record store in lovely hipster Williamsburg. A great and very diverse selection of vinyl, and there are listening stations too. There is a coffee bar if you need it, and a big live venue in the back! It's not unusual for them to have a book signing or a question and answer session with someone amazing like Richard Hell. Very recently they had rowdy garage-pop masters Davila 666 play a live show in the venue! I've also seen my good friends The Nude Party headline a show there. It's a great place for record shopping, live shows, and other events with some of your favorite artists. Also, you can order my record from them.

Photos of Jonny Couch walking us through his five Record Store selections: 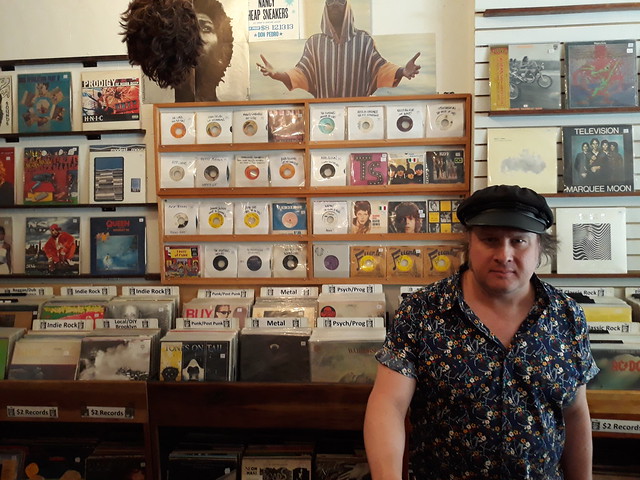 - Rebel Rouser is the best record store in Brooklyn for 45s! These guys are serious about their collecting. You can tell that they put in the work because you will find a treasure trove of rare 45s! Just look at what I'm holding in the photo, that's the band Streak's 45 of Bang Bang Bullet and it is not easy to find. If you're into glam, power pop, or just down and dirty rock n' roll, this is the place for you. They've got cool pins and buttons and even VHS tapes, comics and cassettes too! The folks working there are all great fun and super knowledgable! It's the kind of place that you could just hang out in for hours (and I have).

- Here we have the best store in Brooklyn for a variety of genres and cost. Do you want funk or punk? Soul or rock n' roll? Reggae, jazz, metal, or hip hop? All genres are very nicely represented here and at the right price. There's also these special two to six dollars section in which I always manage to find some magic records. I like to find things I've never heard of and then test them out at one of the listening stations! You never know what you'll find and so it's always an adventure! Bonus points for a huge BBQ with beer on Record Store Day and other events with live bands!

- This legendary record store has a super friendly and knowledgable staff with great recommendations. The best part is that there is new stuff to find on what I'm guessing is probably a daily basis. It's a lot like Human Head in the way that it has a great variety of genres and you can really, really find some bargains! It's a pretty big store so you might have to work pretty hard to find those hidden gems but you will definitely find them every time that you visit!

- As soon as I walked in I spotted the Pretenders debut LP in very good condition for only five dollars. I could tell right away that I was in for a good experience. Of course, this shop has the added bonus of carrying all of the Captured Tracks label stuff. An example of one of these items is the excellent Captured Tracks box set of ‘70s power pop stars Milk ‘N’ Cookies. I will have to go back for that one as it was (understandably) rather pricey. However, in the meantime, there are plenty of bargains on used records and even decent prices on some newer stuff at this fine Brooklyn basement store.