Band Links:
Union Duke have a very special surprise for you a week from today! On November 1st, the band will be releasing their new single “Atlas of Love,” which you can pre-save now on Spotify. This is yet another new track from the Toronto-based folk, rock, country, bluegrass group, after the release of the summer singles “123” and “Ladidadida.” (Find both songs, plus a lot more, by visiting Bandcamp.)

To make things even more eventful, the group will be partnering with The Food Dudes to put on a show in the band’s hometown of Toronto this evening at the Great Hall, titled “Dudes and Dukes.” The event will include a collaboration of a massive menu of cuisine for attendants while they enjoy a concert put on by Union Duke. If you’re in the area, check out the event details here.

Keeping it busy is typically what Union Duke do, a quintet that combines alternative rock with more traditional bluegrass music. The band specializes in joining harmonies, driving rhythms, and infectious enthusiasm to create an easily approachable sound. Thus far, they have released three proper studio albums which have coincided with tons of festival appearances and hundreds of shows. In the two years since they released their last album Golden Days, the band has been touring more than ever. As a result of their recent activity, and appreciation for good food, we spoke with Union Duke’s Matt Warry-Smith about cuisine preferences, cooking, favourite drinks and Toronto-area restaurants.

Listen to the aforementioned and recently released single “Ladidadida:”

Matt Warry-Smith: “(laughs) No. But I have a shellfish allergy.”

Warry-Smith: “Not as good, (laughs). We try to eat healthy on the road or do our own cooking when we can, but it can be pretty tough on tour. Sometimes we get lucky with a home-cooked meal or a great restaurant but generally, we eat better at home.”

Warry-Smith: “I am a great lover of food and amateur cook. After music, it’s probably my favourite thing. Rob is a great baker!”

Some fun, exclusive shots of Niva enjoying all things food: 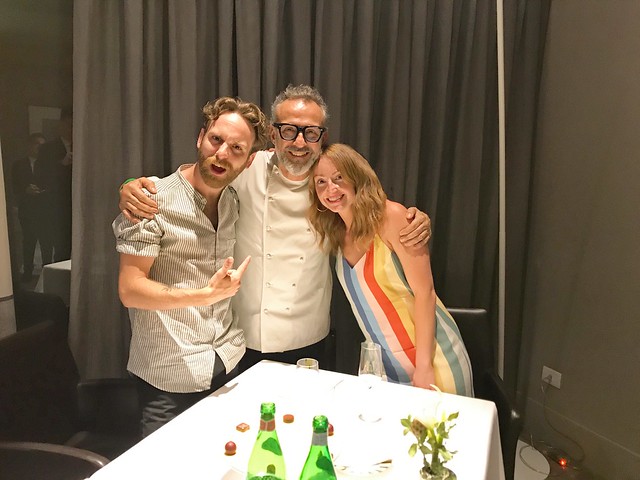 Warry-Smith: “I grew up in Toronto, so I was lucky enough to have access to an incredible amount of different cultures and their food. In no particular order, my current faves are Cote De Boeuf, Seoul Shakers, Famiglia Baldassarre, Tacos El Asador, Ramen Isshin, Harry’s (gone, but not forgotten). Honourable mention: street meat polish sausage.”

Do you have a favourite "food city" when on tour?

Warry-Smith: “Not really. It’s always nice to try to see where locals eat when we visit a different town but to be honest we rarely have the time (or the money) to eat somewhere really cool. Although we did get BBQ three separate times when we were in Kansas City... so that was good.”

Warry-Smith: “Mmmmmmmm anything homecooked is good and ideally something healthy because that gets tough on the road. And we would never say no to whiskey.”

Check out the artwork for the imminent new single “Atlas of Love:”

Warry-Smith: “Mixed grill baby! Faves are probably ribs and brisket but everything has its place. For sides: mac and cheese, slaw, beans, biscuits. Just give me one of everything, please.”

Warry-Smith: “My parents are good cooks and food was always a high priority growing up, but I didn’t start cooking until I was in my 20s. I worked at a butcher shop for nine years and learned a lot there, but it wasn’t until I met my girlfriend that I really started to appreciate great cooking and fine dining in particular. She’s French and a major foodie and really opened me up to all sorts of great food stuff.”

Do you have a favourite chef?

Warry-Smith: “I have a few favourites whose cookbooks I reference a lot, and I’ve been lucky enough to eat in a few of their restaurants as well! Massimo Bottura, Yotam Ottolenghi, Enrique Olvera, David Chang.”

Off of Golden Days, watch the music video for “Heavy Wind:”