Band Links:
From the release of their debut album, 2015’s Dawning, to the hot and dirty moshpits of the Vans Warped Tour, to their latest EP, Void, Florida metalcore band Acaedia have remained a very busy band. With a new record currently in the works, the group just released their latest music video for recent single “Headstrong” and are showing no signs of slowing down.

We hear you’re digging the Horizon Devices Precision Drive. What about it is so dope to you?
Javier Sardinas: The fact that it has an attack knob, which pretty much means you can tighten your tone to your liking. It also has a bright knob, which brings out the high end of low tunings and gives it that very djent-sounding tone. Another awesome feature is the fact it has its own noise gate, so it always closes up perfectly without noise when playing tight riffs.

Acaedia really show off their talent and musicianship in this claustrophobic music video for “I.”


Speaking of the Precision Drive, how did you come about this one? (Steal it? Borrow it? Get it from a special shop?) And what made you pick it up?
Sardinas: I’m a big fan of Misha Mansoor and Periphery. When I heard he was coming out with his own brand/pedal, I immediately pre-ordered the pedal months before it came out (laughs). What made me pick it up was a promo video Misha made explaining what it does and how it’s used.

How was the Precision Drive used during the recording of your latest single “Headstrong” and for what parts?
Sardinas: It was used for the majority of the song. It really helped give the clean lead in the chorus the boost it needs. We also used it for the heavy rhythm tone and gives it that nice tone with clarity and punch.

How easy is it for you to tweak the device and get the tone/sounds you need?
Sardinas: It’s actually quite simple, but it all depends on the tone you’re going for. I’m big on tight mid-range sounding tones, so I was able to find the tone I like fairly quickly.

Check out this exclusive shot of Javier Sardinas expertly tinkering with his pedal. 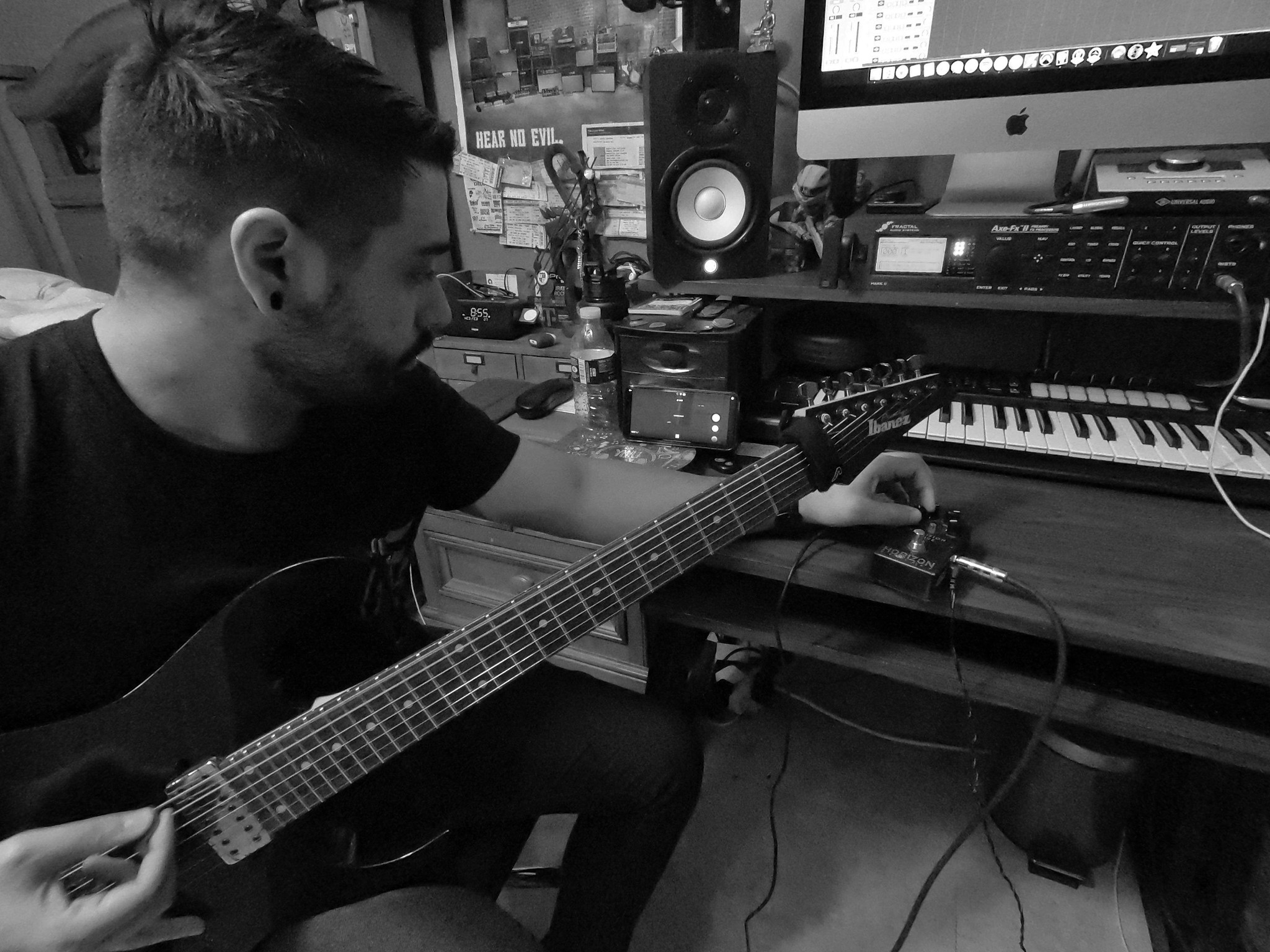 Are they any major cons to the pedal and how does it fair during regular touring and gigging?
Sardinas: I wouldn’t really say it has any cons, and it’s built very well. I’ve had it for almost two years with no issues.

We understand the band uses 7-string low-tuned guitars. Does the Precision Drive pair well with those and why?
Sardinas: It pairs extremely well. It’s actually what the pedal was built for. It definitely delivers that modern metal tone, specifically for lower tuning. It eliminates the muddiness of the tone and brings out the clarity and punch low tunings call for.

Do you have a backup for this gear? If so, what?
Sardinas: I actually don’t have a backup at the moment. However, if something was to go wrong with the pedal, I would revert to the overdrive on my AxeFx.

Give us your best “gear goes wrong” story.
Sardinas: Oh man... This goes back to when I used to own a pedalboard with multiple pedals. We were playing a gig, and one cable started acting up, so my sound kept cutting off consistently. You can imagine how awesome I looked going back and forth on stage trying to figure out what in the world was going on. But those days are over now. Besides the precision drive, I am currently using Ally with my AxeFx for most tones/effects.

Tell us about the creation of your “Headstrong” music video. Good times, lots of work? Did you use the pedal?
Sardinas: It was an amazing experience, especially the fact that this was the first time a set was built specifically for our music video. It was a lot of work though. We filmed for literally twelve hours straight. It was so worth it in the end.

When can we expect more new music from the band and what other crazy things do you have lined up for 2019?
Sardinas: Definitely this summer! We have a lot in store and possibly a new EP…… can’t really say much more at this time, though!

The music video for “Headstrong” was released just last month!