Band Links:
Hot on the heels of the recent release of their new single "You Drink Lacroix", Andy Slania of Chicago, Illinois-based punk band Bad Mechanics took the time to speak to us about some of his gear, plus the duo's upcoming album, Precious Moments in the USA.

What one piece of gear do you use to obtain your signature sound?
Slania: Well this is a crappy way to start off a gear interview, but I'd be lying if I didn't call out Logic Pro. I was a huge GarageBand user, as well as Fruity Loops (way back when) user, which helped me to learn how to program drum tracks and come up with weird sounds, rhythms, and song arrangements. When Bad Mechanics first started, I decided to expand on my toolkit and made the jump from GarageBand to Logic. This was a huge step because Logic Pro offers the ease of use of GarageBand, but so many more available tones and instruments to utilize. From there, all the songs just went their own way stylistically and I was able to use all the available effects to determine how I wanted something to sound digitally, then attempted to recreate those songs in the studio using analog pedals with the help of Pete Grossmann's expertise.

How was this gear used during the recording of your latest album?
Slania: Our newest album, Precious Moments in the USA, was recorded with Pete Grossmann at Bricktop Recording in Chicago, IL. Pete has amassed a wide collection of incredible gear, and in all honesty, a small portion of this stuff was used during the recording of the album, with the exception of the 5150, and my Hagstrom SG knock-off. Oh and the Fuzz Factory, because that pedal is incredible.

How long have you had it, how do you use it, would you ever change it?
Slania: The majority of my gear has been procured over the past 2-3 years. The oldest piece is my Peavey 5150 head with the original tubes, the newest piece is my Orange Dual Terror head, along with the matching pair of Tyrant Tone 2x12 guitar cabs. The primary chain of my set-up goes into a Zvex Fuzz Factory, then Boss Noise Suppressor and DD-7 Digital Delay, then into my Whirlwind Selector A/B/Y switch. This switch rules. I was having issues using a crappy A/B/Y switch and had a ton of bleed, and I saw the awesome Chicago band RLYR play, and their guitar player (Trevor) used the Selector and swore by it...so I got one and it has been fantastic. From there I'm able to control which head/cab my signal gets routed to. I have this fed into my Boomerang III Sampler to control which loop comes out of which amp. I've got this custom Eradicator distortion pedal which I actually use more of a clean/volume pedal for the 5150. To answer your question re: if I'd ever change it...yes, hope to and plan to. Always looking to evolve this. 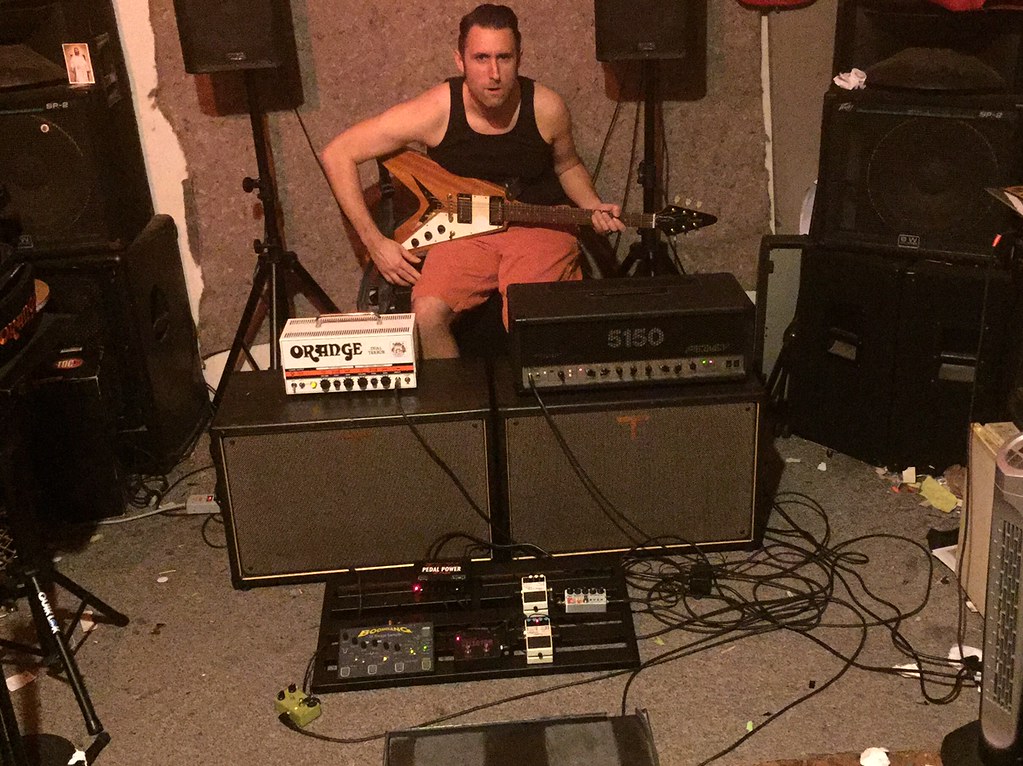 How do you recreate your album (guitar/vocal/bass) tones in your live set?
Slania: This continues to be the most challenging part of the band. All Bad Mechanics songs have complete instrumentals written (guitar, bass, drum machine, keyboards) with no thought of how they would be pulled off live. All of my gear as of late has been obtained out of necessity to attempt to pull off recorded versions in a live setting. It's a frustrating and expensive process where I listen back to what was written, think through why the hell did I decide to do it that way, then determine which parts to construct so that it doesn't sound horrible in a live setting where I'm responsible for all of the instrumentation.

What are the major pros and cons?
Slania: The major pro of doing things this way is that it becomes a fun challenge to try to recreate something in a minimal fashion and identify where to skimp, and where to play. The major con is that there are so many things that can go wrong when trying to do this as the sole instrumentalist. If there's a bad cable, it'll be me in silence nervously trying to figure out what's bad while Daddy (singer) sits there sipping on his LaCroix like the baby he is.

Check out the song "You Drink Lacroix"