Geared Up: Blues-Rocker Ben Poole Explains His Fondness for the Fender Telecaster

Band Links:
In his time as a musician, Ben Poole has made his mark thanks to his immense talents as a blues-rock guitarist and singer-songwriter. Not one to hide behind the shortcuts of the recording studio, Poole loves to get out in front of an audience and wail away on his guitar for as long as concertgoers are willing to stand and listen. While the live album may not be as conventional as it once was, Poole is not one to follow the trends and is about a week-and-a-half removed from the release of his brand new double live album Ben Poole Trio /// Live ‘19.

The record is a full-on immersion into the world of Poole with the recording taking place over three memorable evenings in July of last year at Old Schoolhouse in Barnsley, England, The Half Moon in South London, and finally Bootleggers in the town of Kendal. The album features Poole backed by his talented troupe of musical associates which includes drummer Wayne Proctor and bassist Steve Amadeo. Over the three nights, the trio ran through all of Poole’s most popular tracks from his last two albums, 2018’s Anytime You Need Me and 2016’s Time Has Come. No stranger to live recordings, this is Poole’s first since his 2014 Live at The Royal Albert Hall release and you’re bound to feel all of the spontaneous, energy and power that Poole and his cohorts brought to these three evenings.


For another installment in our long list of Geared Up interviews, we spoke with Poole about his favourite musical gear, including his Fender guitar and long affection for playing and recording with the legendary Telecaster.

What one piece of gear do you use to obtain your signature sound?

Ben Poole: “To be honest, I feel like I, along with a lot of professional players (guitar players or otherwise), can get their ‘sound’ on any number of bits of gear. But if I have to take just one piece of gear to a show it would probably be modded old Fender USA Telecaster.”

Poole: “I have owned the guitar since I was about 16 and even though it’s not the guitar I play the most in my live show where we have our own full backline, if I have to fly in for shows or can only take one guitar to represent/replicate my usual live show it’s this guitar. It feels very comfortable in my hands, I think due to having it and playing it on the road for so long. It is fitted with custom made ‘four seasons pickups’ (based in The Netherlands) which sound amazing.”

Poole: “The latest album is a double live album recorded across three shows in the UK back in July and released officially in January. So this guitar is on three or four of the tracks of the thirteen songs on the album.” 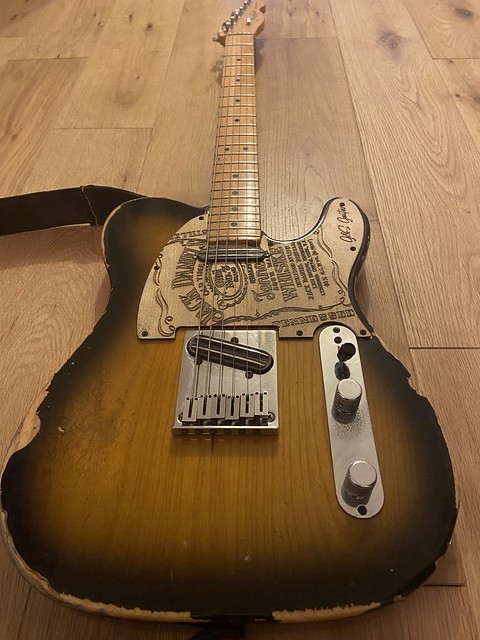 Poole: I have another newer Olympic White Fender USA Deluxe Telecaster which is a good backup for it and also gets a lot of play in the Live show and thus on the new live album.”

Poole: “I’ve had this other Telecaster for about ten years. An ex-girlfriend bought it for me as a birthday present, and when we split up she walked out with the guitar! I had already fallen in love with the guitar by this point so I paid her full price to buy it off her.”

Give us your best “gear goes wrong” story.

Poole: “We played a festival called Linton Festival near Wales back in 2014 and the entire PA system for the festival went down during the middle of our set. I grabbed my acoustic guitar and went into the middle of the crowd and tried to make it an intimate acoustic show. It kind of worked… and kind of didn’t! (laughs) Eventually, the backup generator came on and we managed to finish the show fully electric… thank god as I was blowing my voice out trying to sing to 1,000 people without a mic!”

Watch this live performance of Poole doing “Start The Car” from this past fall the Q-Factory in Amsterdam: