Band Links:
Athens, Georgia’s Grand Vapids recently released their new slacker rock track “Glassing Out,” the second single from the band’s just-released new record Eat The Shadow (purchase via BandCamp now). The song was inspired by the sudden, revelatory moment when you realize that you may just, in fact, be the one who’s making a dysfunctional relationship dysfunctional and then the self-medicating that tends to follow in order to deal with these new feelings.

Eat The Shadow is the follow-up to Grand Vapids’ 2014 debut record Guarantees. Unlike its predecessor, Eat The Shadow was written during some hard times for the band and it’s an album that primarily deals with themes of identity, self-worth, and coping with reality. Lending a helping hand in the creation of Eat The Shadow was producer David Barbe who has worked with The Glands, Drive-By Truckers, and Sugar.

One of the driving forces behind Grand Vapids has been guitarist McKendrick Bearden. Bearden has gained a whole lot of respect within the independent scene of Atlanta, composing string arrangements for Faye Webster’s Atlanta Millionaires Club and Mothers’ When You Walk a Long Distance You Are Tired. Bearden has also toured as a guitar player for Erick Bachmann and Roadkill Ghost Choir. In an exclusive chat with Bearden, we spoke to the talented guitarist about his favourite axes that were used in the creation of Eat The Shadow, including the Squier J. Mascis Jazzmaster and the Nash Telecaster ‘78 Deluxe.

What one type of guitar do you use to obtain your signature sound?
McKendrick Bearden: Well, I don’t know if I have a signature sound. I guess you are always looking to refine your definitive voice as a player. That being said I’ve always loved offsets, particularly Jazzmasters, and Telecasters. The two I use the most are a Squier J. Mascis Jazzmaster and a Nash Telecaster 78 Deluxe. Not sure if that’s what he calls them but it’s the model that it’s based on.

Watch the band’s latest music video for “Glassing Out.” Please be aware that there is a risk of seizure when viewing this video:


What is it in particular about these guitars that make them your guitars of choice in a market of so many to choose from?
Bearden: I love the longer scale neck of a Jazzmaster and the string length behind the bridge. Just more tension and tend to have a heartier feel. Telecasters are perfect guitars and probably the most versatile in my opinion. Simple and utilitarian. The Nash Tele was a gift from my bandmate Austin (Harris) for my 30th birthday. It’s very special to me. I feel a great deal of love and humility when I play it.

Your latest album is titled Eat The Shadow and it just came out in July. How was your Jazzmaster incorporated into the writing and recording of this album?
Bearden: There are some very bombastic and noisy guitar moments on the record. The Jazzmaster is just one of those guitars that you can really beat the shit out of and responds to that kind of playing very well. Otherwise, we used probably ten different guitars throughout the record. It’s just whatever best serves the song. I’m not married to one guitar in a recording setting.

Eat The Shadow is the follow up to your 2014 debut record Guarantees. How has your guitar playing changed on your new album as compared to your debut?
Bearden: Austin (Harris) and I have always been drawn to alternate tunings. Guarantees uses a couple and we expanded that on Eat The Shadow. I believe every song has at least one guitar with an alternate tuning. It’s hard to say how my playing has changed. I guess I would sum it up by saying I’ve become a smarter player.... maybe more clever.

Stoked on the instruments and want to see them? Good thing McKendrick Bearden sent us a couple photos: 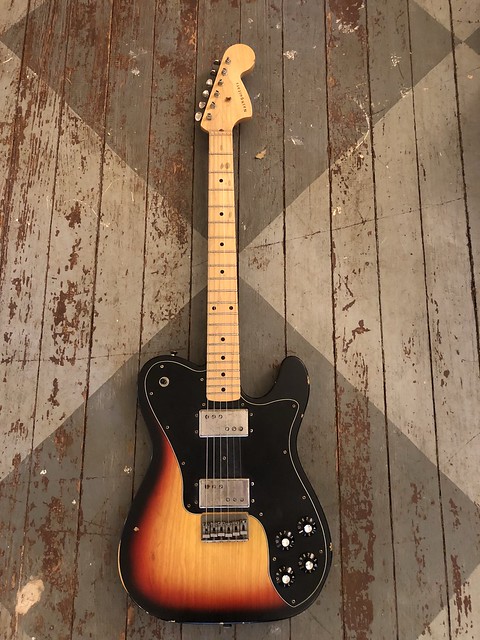 Who are some of the guitarists who influenced or inspired your guitar playing that’s contained on Eat The Shadow? There’s got to be a few at least…
Bearden: The first that comes to mind is Chris Forsyth. The song “Radiant Black” was completely inspired by his album Solar Motel. Rick Maguire of Pile is also another that comes to mind. I was also going through a George Harrison obsession around the time of recording ETS.

Now that you have been a band for a few years now, how much do you find yourself spending practising your guitar playing? Is it a daily routine for you?
Bearden: I studied guitar in school and practised upwards of six hours a day during that time. I don’t do that anymore. I find myself spending more time writing and trying to find more and more interesting approaches to guitar and applications for them.

What are the major pros and cons of your guitar of choice? Is there anything you wish it could do that it can’t?
Bearden: I just don’t think of guitars that way. They’re as individual as people and are all capable of great things. My favorite guitar in the world is a first act beginner acoustic that our bass player Patrick (Morales) owns. He took it with him on a fishing boat in Alaska and wrote a whole record on it while out at sea. The journey shows. It writes songs for you. You could say it’s touched.

Gear aside for a moment, the songs on Eat The Shadow were written during some difficult times for you all. What were some of these difficult times that you were all going through and what helped you get through them?
Bearden: We lost our original bass player in a situation nothing short of a cluster fuck. Some of us were going through breakups. I’ve always grappled with anxiety and depression which was exacerbated during this time. As far as getting through them.... exercising some self-care, friends, family, and just working. Putting your nose down and just doing the work really pulls me out. Whether it’s housework or songwriting or a relationship. And obviously, music. It’s the only constant in my life. It’s what I’ve always turned to since I can remember.

This is also totally off the topic of gear but your most recent music video for “Disjecta” had me absolutely cracking up in laughter at the sight of the dog suited individual strutting down the residential street. You have to tell me how the concept or idea for this music video came about…
Bearden: That’s all from Patrick. He’s a wellspring of humor, charm, and great ideas. You should probably be interviewing him.

When we do these interviews, everyone has always got one of these so tell us, what is your best “gear goes wrong” story? Was there a time where things just went total awry?
Bearden: I was asked to play a version of “Purple Rain” for a classmate’s recital in college. When the time for the solo came around he just shouts “McKendrick Bearden everybody!” and I went to play the first note. Silence. I can’t figure out what’s going on. He waits for about 15 or 20 seconds and said “Nevermind!” to the audience. I was mortified. I never heard the end of it for the rest of college. My classical guitar professor transcribed my “solo,” hung outside his office, then gifted it to me when I graduated. By the way, my amp was just on standby.

Guitarists are known to be perfectionists when it comes to creating their sound or the sound they are looking for. Do you feel that you could still improve on your guitar playing or are things where you’d like them to be?
Bearden: A guitarist who’s not always seeking to improve or satisfied to not keep learning isn’t one worth listening to.