Band Links:
You may think it’s difficult to etch out a name for yourself as an instrumental band, but Girih has done just that. The three-piece instrumental post-rock group from Manchester, New Hampshire has become well-known in the greater Boston area for their powerful live performances that really focus on musicianship in an age where so many artists have lost the art of skill and chemistry.

The guys will release their new album Eigengrau on November 16th, a six-song masterclass in dynamic textures and infectious riffing. As a result of the their laser focus on musicianship, we thought they’d be perfect for a gear-focused interview. As such, we spoke with guitarist Alex Paul to learn more about what instruments he finds essential to the band’s sound.

What one piece of gear do you find indispensable?
Alex Paul: I’d like to think that almost everything we do, we can do with any collection of gear, but the Electro-Harmonix HOG has become essential to our sound.

Before you go any further, you must have a listen to “Voreh” from their debut record Eignegrau.


What about it makes it so important to you?
Paul: When searching for what makes Girih stand out and bring something new to the table, certain settings on the HOG continued to come back. After months of trying members, trying ideas, and filling our set up, the HOG became a staple in every song on Eigengrau. The pedal can let you discover so many different types of sounds and has placed itself as the source of sounds that are at the core of Girih.

How was this gear used during the recording of your latest album?
Paul: We recorded Eigengrau almost exactly as we play live, using the HOG and my aluminum guitar for the low end and for the rhythm. Being a three-piece band, I needed a way to generate those frequencies without a bass guitar. From an organ sound with shimmer to a simple octave down for bass playing over lead loops, it is used across everything. The most essential sound that we use it for is octave down, octave up plus a fifth, and some other lighter sub octaves, on a really tight aggressive sound through bass and guitar amps with a tight attack.

With that mode, I can wash it out for a post-rock setting that spills sound over the whole spectrum or set it to play massive riffs and stark percussive strikes that are the basis of our post-metal intensity.

A slick pic of Alex Paul with his gear. Dig it! 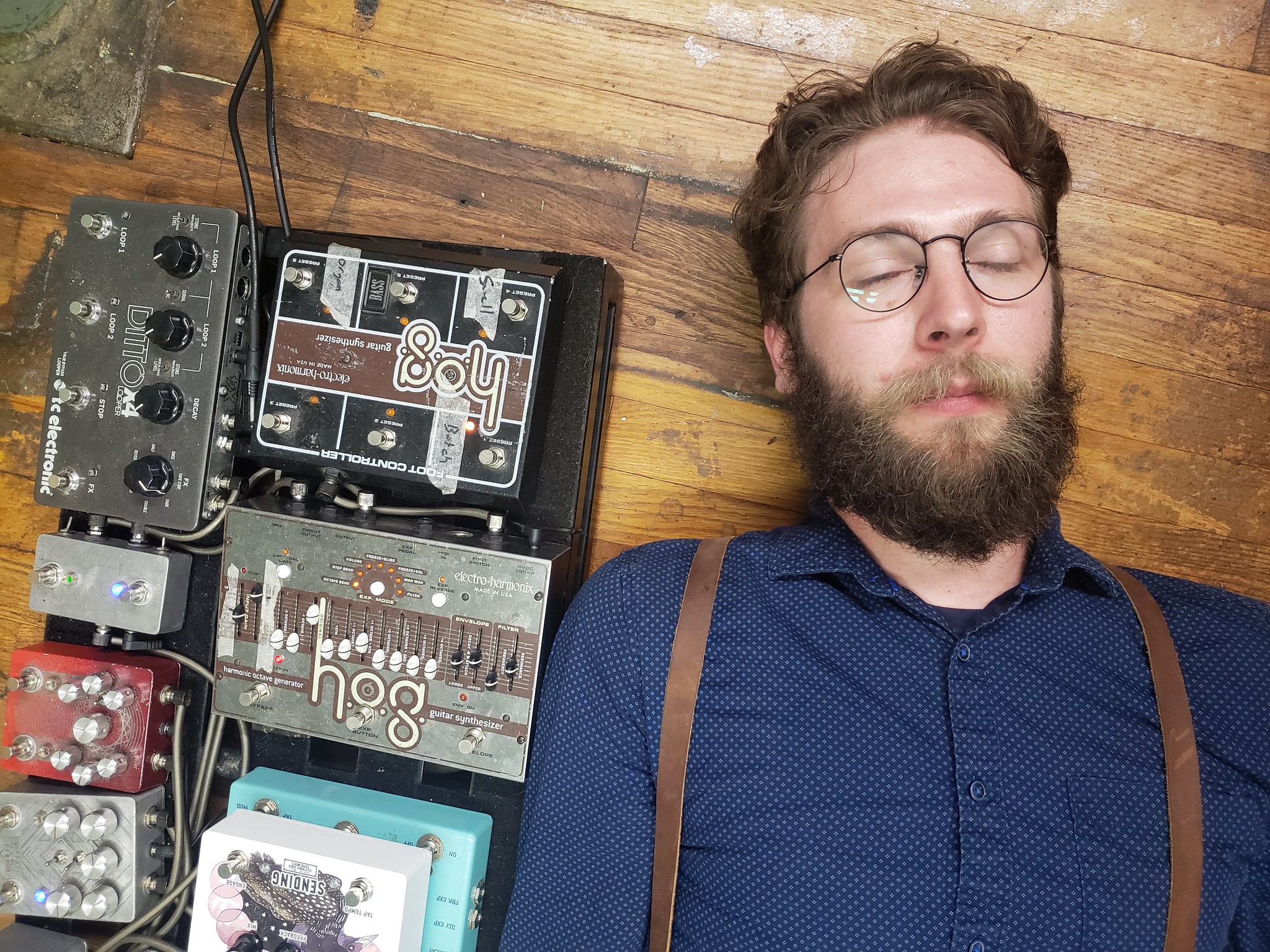 How do you recreate your album (guitar/vocal/bass) tones in your live set?
Paul: Our live sound relies on a couple of essential choices between my guitar and Brian’s guitar. Using looping, A/B/Y switches, and two amps for each guitar; we essentially become four layers of music between the two of us. Using that, we can fill the room with sound despite being a three-piece, and that is a big portion of the sound on the record. I use a bass setup and a guitar setup to match, which really lets my sound have that thickness and full range that is a huge part of how Girih sounds, so you spend no time wishing vocals would fill out more space. Brian’s sound is also split on both stage left and right, which helps his clean leads swirl around you, and I think that is pretty key as well.

What are the major pros and cons?
Paul: With the HOG’s downsides, I am surprised how it survives. It’s a complex pedal, it has settings that aren’t saved on the selector, and likes to be a little bit picky about if it wants to ruin a live set or not. It also takes up major pedalboard real estate, especially if you have the v1’s foot controller for saved settings. With all that, it can still become six different instruments and create enough sounds to be three additional band members, so I keep it close to my feet.

Do you have a backup for this gear, if so, what?
Paul: There may be a day where I set aside some pedals to get the core functions I've settled on out of the HOG, but it is too essential at this point.

The band will release Eigengrau on November 16th through dunk!records (U.S.) and A Thousand Arms (EU).

How long have you had it, how do you use it and would you ever change it?
Paul: I’ve had it for about five years, right when EHX announced they would discontinue the pedal (secretly they were launching the HOG v2, those sneaky bastards). It is placed as the first pedal in the chain, right after the tuner, getting the most clean and unaltered sound to apply its harmonic additions to. I’ve considered getting the new version, but as it stands the pedal has knit itself into my setup as an integral part.

Give us your best “gear goes wrong” story.
Paul: The HOG is the best at making these stories. It has a ribbon cable inside that runs between two layers of the pedal, and this ribbon cable is plugged into the top half with no locking mechanism. With gravity doing its job and the vibration of a trailer, this little cable likes to unplug itself, totally shutting down the whole pedal and any signal that even attempts to pass through it. Several of my biggest shows have had the HOG decide I wasn’t going to be using my pedal board that night. It is now segregated to its own spot on a switcher, dedicated to making sure we can still play a flawless show.

Any final thoughts or comments on the gear?
Paul: Two hours alone with this pedal will have you finding out new sounds you never thought you could make.

Check out the video for the just released new video for “Sinneslöschen” also from Eignegrau.