Band Links:
The members of Brighton, UK-based emogaze group, Harker lived and breathed punk rock music growing up, so they decided to form a band! The four-piece initially began as an acoustic outfit in 2014 and evolved over time into their current sound. They released three EPs, Hours (2014), Gasping For Air (2014) and A Lifetime Apart (2015), prior to their debut album, No Discordance, which dropped in April -- in the U.S. via Wiretap Records. We recently spoke to guitarist Tony Ware about his favourite gear, including the Strymon Deco amp and the Spark Booster.

What one piece of gear do you use to obtain your signature sound?
Tony Ware: My main bugbear for years has been amp sound – in the past I’ve used an Orange TH30 and a Handwired Vox AC30, I now use a Blackstar S1 50. I used all these amps the same way – gain/crunch channel, set on a medium gain. Main difference is the Vox and Blackstar are far more dynamic, and also work very well with effects. I’m a total effects nerd so I use a lot of pedals.

Using lots of boosts and distortion/fuzz, having a distorted amp tends to work against me – so with the amp distortion set fairly low, I bolster the crunch using a Strymon Deco. One side of the deco is a boost/saturation switch, the other side is a tape modulation, which I also use a lot. It’s slightly more subtle than a chorus, and I love the slightly “out of tune” effect it produces. I also have a MXR carbon coby, which also has a tape mod on it. Using the Strymon and the CC together really fills out the sound.

What about it makes it so important to you?
Ware: The boost/saturation of the Deco I use 90 percent of the time. It allows me to create a fuzzy, driven sound without overloading the amp – so I get all my distortion tone from here. The tape mod side I use a lot for solos and lead breaks/riffs – and really comes into its own when I overload the amp with more fuzz – it exaggerates the tape effect and creates a really over the top flanger effect. So basically, two main effects I use come out of the same box. I’d struggle to live without using it at the moment. 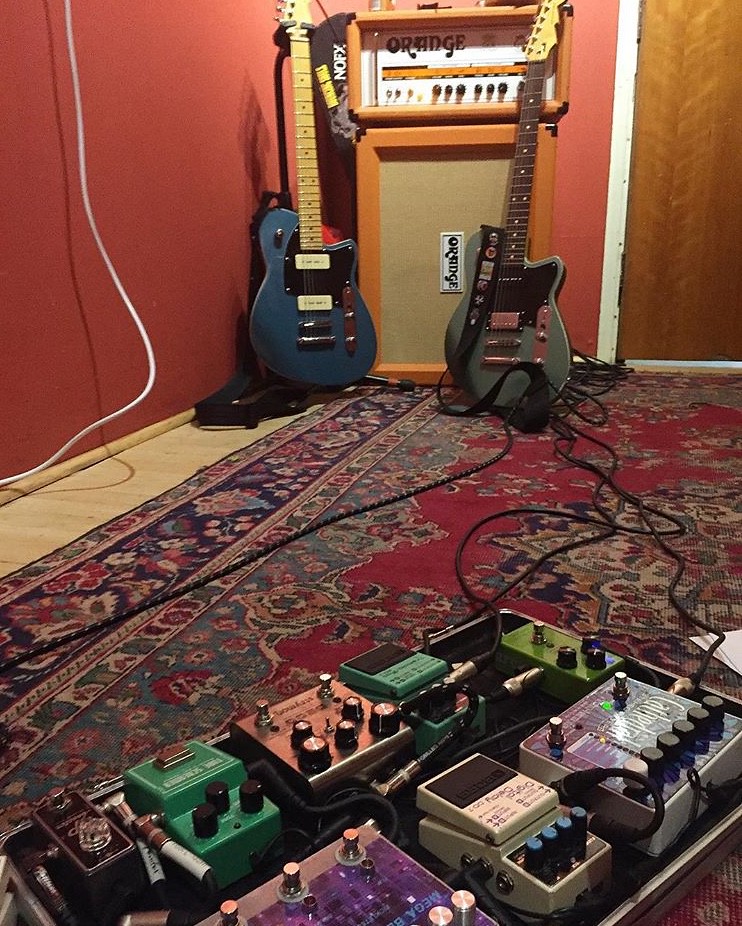 How do you recreate your album (guitar/vocal/bass) tones in your live set?
Ware: Blackstar is set to a medium crunch, Deco Boost on for all rhythm parts. However because the Spark boost is louder, I will switch between the Deco and the Spark for solos/louder sections. The Spark gives me more of a J Mascis/Joey Santiago overloaded lead sound, with a +20db, so really cuts through when it’s on. Just wish I could get it louder!

What are the major pros and cons?
Ware:The pros are that my gear produces a lot of feedback – I’ve always had feedback problems since I started playing, and have learned to embrace it. Its part of my sound now, and I’m able to control it to a certain extent. For live work I really need it there – I’m a big Bob Mould/Pixies fan, and have observed how they use feedback for years! I tried using the modulation pedals through my amps effect loop for a while, and although it is much cleaner, I like the wall of sound it creates when all the pedals are in line with each other. Is that a pro or con? I mean I’m probably not using them how they should be, but again, it’s become part of my sound.

The major con of the Deco, is that the mod and the boost aren’t on different pedals! I’m currently trying out a Line Selector in my board, between the Deco and the Spark, but obviously I can’t split the Tape Mod.

How long have you had it, would you ever change it?
Ware: I’ve had the Deco about three years and it’s the only pedal that I haven’t changed in my board in that time. I would change it though if I could find a separate Tape Mod pedal that did what I wanted. Then I’d be able to have two boosts and a tape mod all independent of each other, and could switch between Boosts using a Line Selector.

Give us your best “gear goes wrong” story.
Ware: I had a “rock n’ roll” meltdown and kicked my pedal board across the stage in frustration once, because of a supposedly dodgy fuzz pedal that repeatedly went wrong through a show. Turned out the problem was a patch cable!

Any final thoughts or comments on the gear?
Ware: Really couldn’t do what I do without the help of my Reverend guitars or Mega Berkatron pedal. Discovered Reverends a couple of years ago in the States at a music shop I know in Asbury Park. Best guitars I’ve ever played – well balanced, relatively light (which is great when you are short!), awesome sounding pick ups. I have three now – two Double Agents and a Charger.

As for the Berkatron – these are custom made by Pickletech, a one-man outfit I found on Facebook. The basic fuzz on it is great, really fat and glitchy, but the two other settings are what makes it. One switch introduces an almost 8-bit style effect to the fuzz, and the third is a “Panic” button. Admittedly, the third is rarely used, and is generally good for noise, but the first two settings I use a lot. Its unusual that’s for sure.