Geared Up: JASMINE CAIN Discusses Some of Her Favourite Instruments Used When Writing the New Album ‘SEVEN’

Band Links:
One of the hardest working musicians in America has got to be Sturgis, South Dakota native, Jasmine Cain. Jasmine racks up miles like nobody’s business, routinely playing over 150 shows a year all across the United States, often in remote locations. Jasmine has established herself within the music and motorcycle culture as she has fit right in with the biker “gang,” often performing at festivals taking place during motorcycle shows or rallies.

With six previously released albums behind her, Jasmine recently issued her latest offering, SEVEN, a record three years in the making, helped along by producer Caleb Sherman (The Lacs, Rex Brown of Pantera). The album is one of Jasmine’s best, combining elements of active rock with the pop sensibilities of Adult Contemporary. As she continues to log the miles and impress audiences with her spirit and energy, we spoke to Jasmine recently about her favorite musical gear, including her Warwick bass guitar, the Traynor YBA-300 amp, and also an awesome “gear goes wrong” story that she had to share with us!

Let’s take you way back to 2012 with the video for one of Jasmine’s biggest songs, “Highway Prophet.”


What one piece of gear do you use to obtain your signature sound?
Jasmine Cain: It’s really hard to beat just the flat sound of a Warwick bass. I am currently using a Streamer LX and I love it! The only pedal I’m using currently is the Darkglass B7k Ultra and it is amazing. Gives you that gnarly growl and allows you to blend it into your clean sound which gives you clarity. Punch, and the overdrive sound all at the same time. My current amp is a Traynor YBA-300 and 8x10 cab.

You want to hear some power, come on over and check it out. I’ve always been skeptical of taking tube amps on the road just because they get the shit beat out of them, but this Traynor holds up. There are six channels with two Ruby’s on each channel and what I love about this bass head is that when one tube goes down, only that channel shuts down. The rest will continue to play! Which means there’s no downtime on stage switching out heads before we can continue. I love that it has that capability.

How was this gear used during the recording of your latest album SEVEN?
Cain: We have a very basic vintage approach to our recording. I met my boyfriend Kevin Bebout from his band Full Devil Jacket and discovered he collected Vintage Ampeg bass heads. I collected the Vintage Ampeg cabinets with the CTS speakers that have the square magnets. They don’t make them anymore. We combined our pieces and created a killer vintage Ampeg warm and gritty sound. The secret weapon axe on all my albums is my Warwick Thumb Bass NT that I got in 1999. It’s so dark-sounding and it records really well.

You can thank us later... check out these shots of Jasmine’s amazing collection of gear: 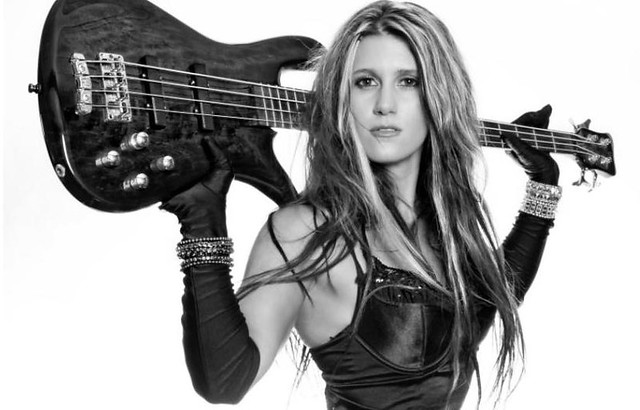 What would you say are the major pros and cons?
Cain: I mean, I don’t always use the same gear live as I do to record. Each instrument and piece of gear has its place in the mix.

You have about a dozen gear endorsements going right now, including ones with Warwick, Epiphone, Traynor, Line 6 and Peavey. That’s a long list of endorsements! What was the first gear endorsement you ever got?
Cain: First endorsement deal I ever had was through EMG Pickups. They introduced me to Hans Peter from Warwick and that was my next deal. He loved my story about how I chose my first Warwick bass.

Why do you think you became so active in endorsing different gear? Was this something you were approached with, or did you pursue it more as a private business venture or interest?
Cain: I only endorse gear that I actually use and love. I never went after endorsement deals just for the sake of getting one. Every company I approached, I did with reason. I write on acoustic guitar and do a lot of acoustic shows as well as rock shows.

Speaking of Jasmine playing a lot of acoustic shows, let’s check out this live acoustic rendition of Motley Crue’s “Kickstart My Heart,” filmed at an old mansion in Minneapolis.


Do you have any good “gear goes wrong” stories to share with us?
Cain: (laughs) Oh yeah! Plenty. When we first got the Traynor amp system, we were performing a show with Jeff LaBar of Cinderella in Nashville. I had the amp power on, and on standby to warm up, and I think there must have been some sort of major power surge in the building because a tube shot straight out of the top of the amp through the metal grate and all and lit on fire. Turns out when one of the tubes go out, a resistor pops and gives you quite a show. I’ve done several hundred shows on that amp and never had a problem since. It’s built like a tank. But that happened one time to each of the heads I have.

Gear aside for a moment, aside from those endorsements, you have three coffee roasts called Suicide Blonde, Whiskey Kiss, and CoffinWhat got you interested in having your own coffee?
Cain: I was just tired of having to drink shitty coffee on the road. We do a lot of events where you’re in a field with no civilization nearby and you’re completely dependent on the food vendors at the event. Coffee is my happy place every morning, so I need that to happen. I started carrying around a 40 cup percolator and sharing and eventually, everyone wanted to know where I got this coffee. Supply and demand. Simple as that.

A frequent venue for a Jasmine Cain concert has become at motorcycle rallies across the United States. What would you say is the primary difference between a traditional club show and playing at a motorcycle rally?
Cain: A motorcycle rally is more like a music festival than a club show. It’s outdoor stages with lots of people and motorcycles everywhere. Most rallies are adult only, so there is a lot more....let’s say “freedom” than a club venue. I was born in Sturgis, South Dakota, which is home to one of the largest motorcycle rallies in the world, so I came by it pretty naturally.

Before we end off, I just wanted to touch on the new album SEVEN for a moment. You have said you needed a new direction with regards to writing and recording SEVEN. Why did you feel it was the right time to do something different or at least change up the process?
Cain: With every album, I feel the need to grow and expand my abilities. If you’re not growing, you’re not pushing yourself to be better. If I ever feel the need to just mail it in because I don’t want to be better, then I will hang this up and walk away from it. There is no point in doing something if you’re not willing to give it your all.

Check out the very patriotic music video for the Jasmine Cain tune “Fade.”