Band Links:
Tempe, Arizona's melodic hardcore newcomers Lifelink released their thundering Love Lost EP on September 1, 2017 via Innerstrength Records and it's about time this band was on your radar. Thankfully, we were able to recently catch up with the quintet's guitarist Kamran Oskouie who was kind enough to talk gear, specifically his Egnater Armageddon.

What one piece of gear do you use to obtain your signature sound?
Kamran Oskouie: My Egnater Armageddon amp head.

What about it makes it so important to you?
Oskouie: It has the strongest clean and distortion of any amp, hands down. Very full-sounding and has insane EQ capabilities.

How was this gear used during the recording of your latest album?
Oskouie: I used my Egnater for every one of my parts, clean and distortion, and ambient shit. Cory (the engineer) was impressed by the way it sounds, which is a big deal!

How do you recreate your album (guitar/vocal/bass) tones in your live set?
Oskouie: We actually used very little gain in the studio, which sounds good while recording, but live I try and bring a little more crunch to the tone and brought up the bass range to give it that good 'ol girth.

What are the major pros and cons?
Oskouie: Pro is the crazy amount of tools and adjustments that it has included. Con is that I use everything the amp has to offer, so if anything happened to it I'd be fucked.

Do you have a backup for this gear, if so, what?
Oskouie: "Can I borrow your head?" 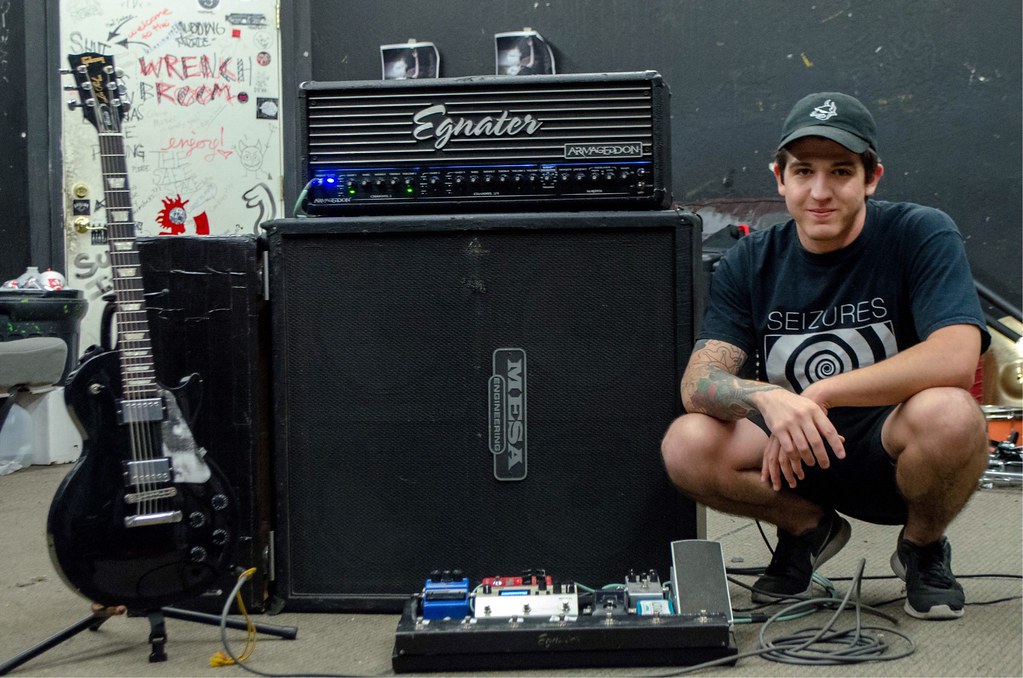 How long have you had it, how do you use it, would you ever change it?
Oskouie: I've had the Armageddon for four years. I don't think I'd ever change it unless Egnater came out with something even better somehow.

Give us your best "gear goes wrong" story.
Oskouie: Probably 1 out of 10 shows I'll plug in my FX loop the wrong way, or my speaker cable isn't plugged in, and I'll freak out and tell everyone in the band that "MY HEAD IS BROKEN." But really I'm just a dumb-ass with a short fuse.

Any final thoughts or comments on the gear?
Oskouie: I love my Armageddon, it's perfect! I'm still not done tweaking my tone (is anybody?) but I highly recommend trying one out.

Check out the group's music video for the song "Unhealed"