Band Links:
Taunton, UK's atmospheric doom/sludge metal quartet, Sail, are set to release their debut album, Slumbersong, on March 10th via Hibernacula Records. Loaded with nine trippy new songs, the group will instantly appeal to fans of bands such as Torche, Pallbearer and/or Black Moth. Check out a video for their single "The Weight of Gold" below, and learn more about Sail's signature sound via this Geared Up interview with guitarist Tim Kazer.

What one piece of gear do you use to obtain your signature sound?
Kazer: This is actually quite a tough one, but the bit of gear which impacts most to create my sound is probably my Overdrive pedal; the Mayflower by Walrus Audio.

What about it makes it so important to you?
Kazer: A while back I started really looking at what I wanted my sound to be. I settled on a mix of subtle distortion with tight treble and masses of low end pushing it through. The Mayflower does exactly this. It's a really cool less intense overdrive with the ability to dial in your treble and bass, which I adore.

How was this gear used during the recording of your latest album?
Kazer: The bulk of our album is fast-paced, chugging or angry and heavy so it really refined how those parts sounded. It's what makes my parts stand out as me, in the same way Charlie's classic Marshall crunch does or Kynan's tight punchy mix on his tiny terror does.

How do you recreate your album (guitar/vocal/bass) tones in your live set?
Kazer: We have been really lucky in the last few gigs in that we've provided the backline. What's lost in faff is more than made up for in playing through your own gear. Otherwise, it's a case of using the pedals, manipulating them so you get as close as possible. Not always possible but we pride ourselves on sounding as good as we can wherever we play.

What are the major pros and cons?
Kazer: Genuinely I really can't think of any cons. It sounds amazing, it's perfect for leads or using it like I do for that little bit extra to push and refine the amp sound. It's beautiful, it even looks beautiful. Seriously, check out the artwork on it at some point!

Do you have a backup for this gear, if so, what?
Kazer: I actually don't at the moment. Although I really should. If I were the pedals which I'd definitely look at are the Electro Harmonix Crayon and the Kingdom by Fox Pedals, both of which are stunning. 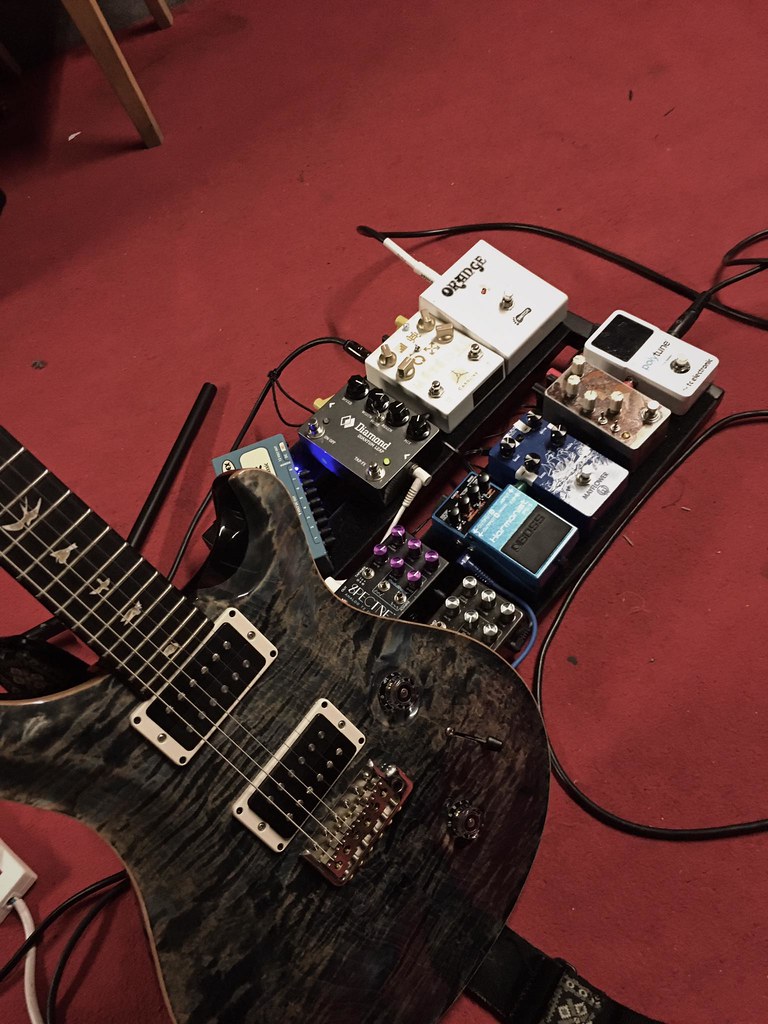 How long have you had it, how do you use it, would you ever change it?
Kazer: I've had it going on a year and a bit now, and I mostly use it to tighten and refine the gutsy drive channel from my orange. I'd never change it. It's the most practical of my pedals (I go for the weird ones) but it works and sounds like a dream.

Give us your best "gear goes wrong" story.
Kazer: A couple of months back we were playing in Plymouth. Some of the guys had been having a couple of issues with stuff throughout the week but nothing we were particularly worried about. We get to the chorus of this song, it's the second to last track on the album, big build up, big chorus. Suddenly I realise it sounds wrong and as I pan across I see Charlie down on his knees frantically trying to fix pedals and a little bit behind him is Kynan furiously bashing his amp to get it to work. Leaving just me and tom and possibly the most underwhelming start to a gig we've ever had. I think we pulled it back though.

Any final thoughts or comments on the gear?
Kazer: I could literally talk for days about the gear I use and thank you so much for giving me the chance. I'd like to give massive praise to the guys from Chase Bliss Audio, I've got two of their pedals and they are the most intuitive, in-depth, bizarre boxes of joy I've ever had the privilege of owning. We are all very very proud of the gear we own and the way it helps shape our sound so it was really cool to be able to talk about it with you. So again thank you for your time and for letting me blither!

Check out the video for the song "The Weight Of Gold"