Band Links:
Winnipeg, Manitoba’s Softswitch play some pretty primo post-punk and, with industry vets like Steve Albini and Bob Weston having worked on the band’s upcoming Happiness EP, you can bet it’s got bite. Due out on November 30th, 2018, with pre-order action available here, we were able to connect with the group’s guitarist Rob Hill to talk about some of his gear and how it impacted this Albini-mixed and Weston-mastered recording.

What one piece of gear do you use to obtain your signature sound?
Rob Hill: Steve Albini! Also, I have tried many but only like playing on my heavily modded and beat to shit Gibson Melody Maker.

What about it makes it so important to you?
Hill: It’s the best. The combination of quality tonewood, personal history, construction and weird modifications makes it so I don’t even like playing other guitars. It is also extremely feedback sensitive which at times is difficult to wrangle but challenges and inspires how it’s played.

How was this gear used during the recording of your latest album?
Hill: Only guitar played on the album; it’s brutal feedback was used throughout and mixed just under the other instruments.

How do you recreate your album (guitar/vocal/bass) tones in your live set?
Hill: Most of it’s the same, except we don’t have a Jupiter 8. We do have a custom tube amp on the synth that adds a lot of chewiness.

What are the major pros and cons?
Hill: Temperamental, unpredictable gear for Rob but predictability is boring.

Do you have a backup for this gear, if so, what?
Hill: Nope, I’d probably cry if it was ever stolen.

Check out an exclusive shot of Rob’s dope guitar, amp, and fireplace? 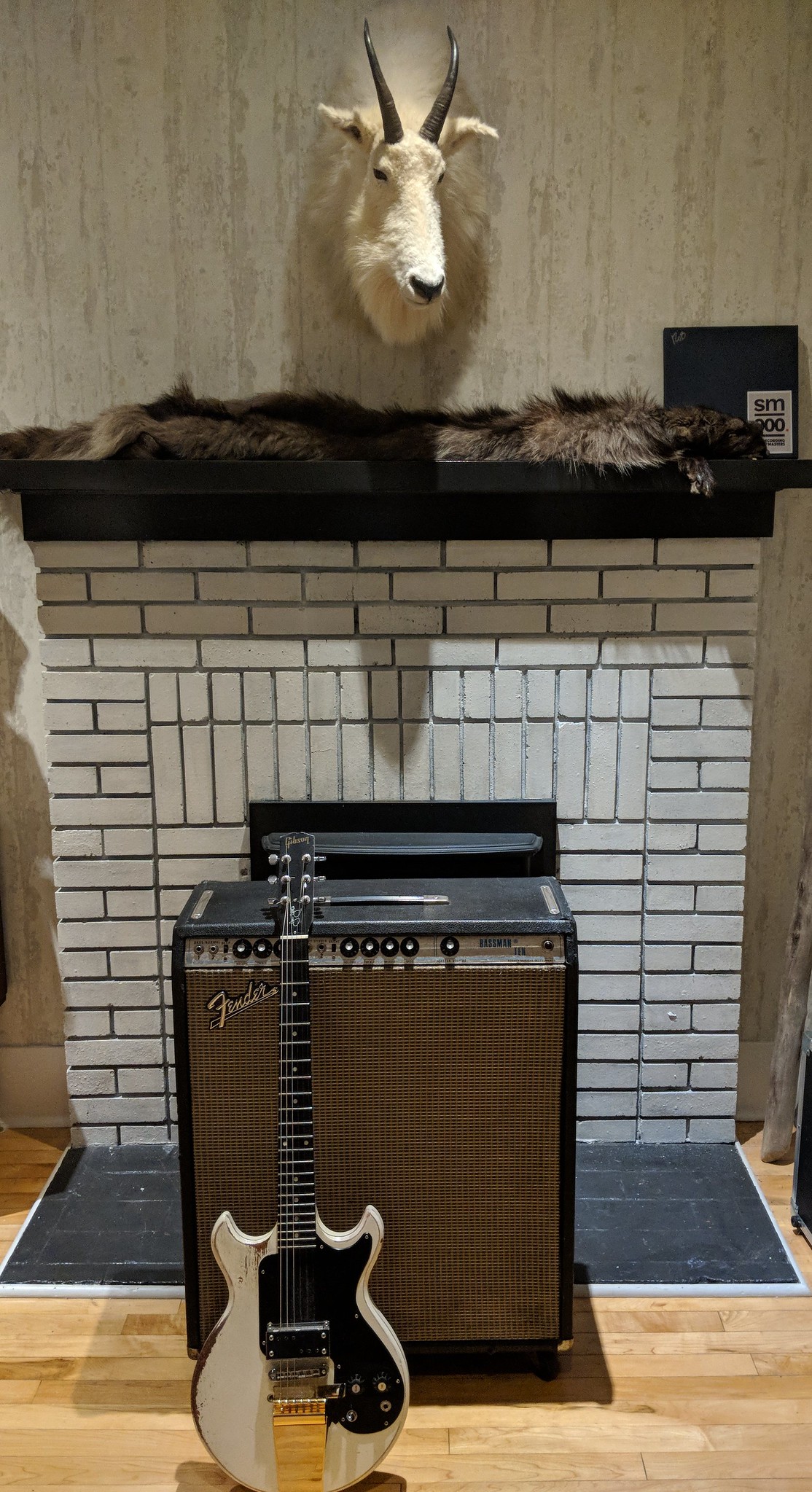 How long have you had it, how do you use it, would you ever change it?
Hill: Since 2007. I may swap out the pickup at some point if my bandmates get annoyed by how brutal it sounds.

Give us your best “gear goes wrong” story.
Hill: I was in a band that played covers including “Route 66” and hated playing it so much I ripped his strings off my guitar the song prior. The lead guitar/vocalist then handed me his guitar to play and my amp then died halfway through “Route 66” which led to me destroying the amp onstage. Suffice it to say, it was not well received by a covers-loving crowd and that was the last show I played with them.

Any final thoughts or comments on the gear?
Hill: I like to use gear in a way it was never intended to. I’ve got an incredibly hot string through lapsteel pickup in my Melody Maker. I enjoy using good gear the wrong way. Installed a Gibson vibrato tailpiece even though it hangs over the end of the guitar body. It actually kills sustain and makes it sound even more biting when paired with the lapsteel pickup. I actually have a problem and physically cannot own something without modding it in some fucked up way that makes it valuable to no one but myself.

You haven’t experienced Happiness until you stream this album.