Band Links:
Dutch heavy hitters The Last Element have committed themselves to create a modern sound, derived from the rawest and most organic point of rock music, combined with the explosive sound of some of the most well-known names in modern rock. Formed in 2016, the quintet comes from Amsterdam and have tried to mold their music, partially in the spirit of Bring Me The Horizon, Breaking Benjamin and Normandie. Although they have yet to properly release an album, The Last Element have already amassed a large following of dedicated fans, with over half-a-million streams on their Spotify page in less than three years.

They have currently amped up their aural output with the new single “Forgot About The Sun,” which is part of an intention to release a run of individual songs before a proper recoding is dropped at some point in the future. “Forgot About The Sun” was preceded by the spring release of “My Own Hell”; expect more new music from the emerging act in the coming weeks and months. To offer you a proper introduction to this exciting young group, we spoke with guitarist Noah Grim about “Forgot About The Sun” and both the band and Noah’s favourite gear, including the Kemper Profiler amp which he uses in close conjunction with his PRS guitar.

What is the particular type of gear that you use to obtain your “signature” sound?
Noah Grim: I use a Kemper Profiler and a PRS of which I don’t actually know the exact model, (laughs). I guess I’m off to a bad start already, but the exact model doesn’t really matter that much to me. I know the guitar looks and sounds sick and those are the important parts to me. Also, it has been modified with a coil-split function, so I guess it’s a unique piece now! Now, this might sound cliché, but I do really believe that a big part of a “signature” sound comes from the way you play. I have a particular way of holding my pick and hitting the strings, which gives me a sound I really like for our style of music. As far as picks go, it differs per guitar part, but I tend to go for the Dunlop Hetfield Black Fang .94 mm. I feel that it compliments my playing style very well and gets the sound I’m looking for most of the time.

Time to have a listen to The Last Element’s banging new single “Forgot About The Sun:”


Now you and Nick Polman share guitar duties for The Last Element. How do you decide who does what when it comes to writing a song?
Grim: At this point in time Nick doesn’t actually write for The Last Element. Nick takes care of all the artwork and that too consumes a lot of hours because he’s so meticulous about it. So we do divide all the labour. I share writing duties with Jan Bijlsma Bass (our bass player and mixing engineer) and Jasper Roelofsen (our singer). We all write both independently and together. Jan and I usually both write full demos of songs with programmed drums, synths etc... and then try to see if we can improve each other’s parts and Jasper writes basically all his vocals and lyrics.

You have a recently released new song titled “Forgot About The Sun,” in addition to the spring release “My Own Hell.” Should we take these as a sign that an EP or an album are coming soon from The Last Element?
Grim: For now, we’re focusing on doing a more steady, ongoing release of singles. Our next single, “Damaged,” is coming up very soon, which we are very excited for. It’s quite a bit heavier than “Forgot About The Sun” and really hits hard from the first riff. I would love if anyone reading this would check it out! If you follow us on Spotify you’ll be immediately notified when it drops. Also, always feel free to let us know what you think on our socials. Any and all feedback is appreciated! We feel that the single-by-single approach is maybe a bit more contemporary. We would also like our first album or EP to drop hard! So gaining a bit of following first seemed like the right decision to us.

Thanks to some exclusive pics, get a feel for the band live, and Noah Grim’s gear: 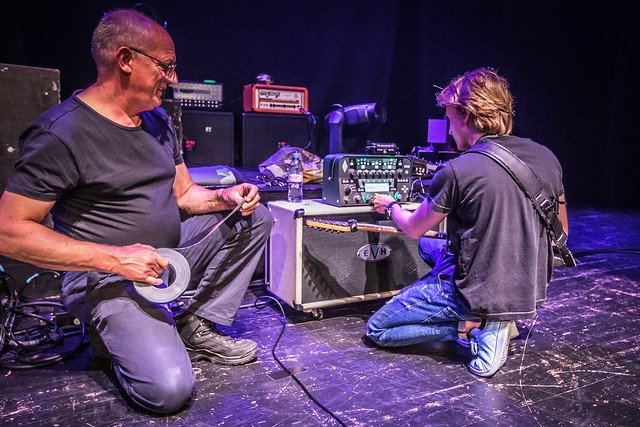 How was your Kemper Profiler used in the writing and recording of “Forgot About The Sun?”
Grim: Jan actually wrote most of “Forgot About The Sun!” As far as recording, the Kemper makes my life so much easier. I have a main output and a direct output going to my interface which then goes directly into my laptop so I can record my “amp” sound and a DI at the same time. There are no microphones involved. It’s really the simplest recording chain possible! More interesting might be how I used the Kemper for our upcoming single “Damaged.” The guitars on that song have a very particular sound I created in the Kemper. There’s a lower octave mixed in and I used a somewhat odd EQ trick to make the sound more “snappy” and aggressive. That combined with the coil-split on my PRS got the exact sound I was looking for when writing “Damaged.” In that song, I use a low A-string that I wanted to sound massive, but clear at the same time, and that tone got the job done!

What are the major pros and cons of the Kemper Profiler?
Grim: Pros are definitely the ease of recording as I mentioned earlier and the ease of creating presets for live playing. No tap dancing! Also, the quality of the sounds and the sheer amount of them is amazing. That is also its con for me though. I have so many sounds that I sometimes just don’t know where to start!

Many guitarists are very dedicated to one particular guitar, while there are others who will use even two or three. Are you very dedicated to one guitar? Or do you ever decide to change it up, either in the studio or in a live setting?
Grim: I almost exclusively use my PRS since it’s the only guitar I have right now that fits our sound. I have an awesome Godin Freeway EMG, which I love, but it has a much brighter sound due to its small and slim body and an assortment of wood. So for recording, I always go for the thicker sound of the PRS! I will use the Godin live though as a backup and for some particular songs since it has a built-in killswitch which I need for some parts.

Check out the shadowy new artwork for The Last Element’s new single “Forgot About The Sun:”

There are obviously a lot of bands with two guitarists, sometimes even three, but through the history of rock, the quartet with one guitar player has been generally more common. I’ve always wondered if there is friendly competitiveness between two guitar players in one band. Do you ever feel any competitiveness with Nick, even just in order to help you achieve your best performance?
Grim: I’d say, yes and no. I don’t feel the need to be better than Nick or any other guitarists for that matter. However, since everyone in the band, not just Nick, is, in my opinion, so good at what they do it has really stimulated me to up my game. Nick, Jan, and Robert are extremely tight players who rarely make mistakes and Jasper is an incredible singer. We all strive for the best and that’s a very good environment to develop yourself as a musician.

Even some of the legends always want to improve on their playing. What is the one aspect of your guitar playing that you’d like to develop or improve at?
Grim: I suck at writing guitar solos! I set a pretty high standard for guitar solos. I like them to flow and tell a story, though a bit of mild shredding can be cool at times. I find both pretty hard to do though, so that’s definitely something I’d like to improve at. I’m also constantly working on my right hand-technique, refining my strengths and improving my weaknesses. I’m happy with my sound, but speed is still an issue. I’d love to be able to play some of the crazy riffs guys like Mark Tremonti and Nuno Bettencourt play, but that’s still at least three levels too hard for me!

Check out the lyric video for the band’s energetic, supercharged previous single “My Own Hell:”


Do you find that you are one of those types of guitarists who is obsessive about practising as much as they can? Or do you find that you’re not necessarily one of those every day, hours per day types of players?
Grim: Definitely not! I really don’t like practising. Something I always teach my guitar students is that first and foremost, playing the guitar needs to be fun. To me, practising is not fun. I prefer enjoying playing the guitar and therefore picking it up more often, which kind of ensures you practice (through playing) more often. That being said, before recording and performing live I will make sure to practice A LOT, but that’s different and fun in its own way I guess! On a daily basis though, no.

We find that a lot of guitarists tend to have a “gear gone wrong” story about a time where their guitar, or other equipment, totally failed them live. Can you share any similar memories with us about your Kemper Profiler?
Grim: Actually, no, I can’t. Truth be told, I haven’t performed live with the Kemper all that much yet, but it has never failed me. I do make sure to bring a backup unit with all my presets loaded just in case, but I’ve never needed it! Thanks for the interview guys! We really appreciate you being interested in the band. Support means a lot!
Share this: