Band Links:
The Picturebooks are a wicked two-piece German blues rock duo, featuring guitarist and singer Fynn Claus Grabke and drummer Philipp Mirtschink. The guys released their sophomore album Home is a Heartache on March 10th via Another Century Records (order here) and they are without a doubt both musicians' musicians. Fynn plays on obscure vintage guitars he bought from thrift shops around the world and Philipp has a drum set with the largest possible drums which he hits with heavy duty felt beaters. The set also has no cymbals, just a few self-made percussion instruments. With such specific and eclectic tastes in instruments, we just had to catch up with The Picturebooks for a Geared Up interview. See below for what Fynn had to say about his favourite gear!

What one piece of gear do you use to obtain your signature sound?
Grabke: My old early '50s Gibson ES-125.

What about it makes it so important to you?
Grabke: Everything. The way it looks, smells and most importantly sounds. I believe that instruments that look good will sound good too. I learned the hard way that that's not always true, but it most definitely was with this guitar. I've never heard anything like it before... which makes it hard to recreate with something maybe a little less expensive or reliable or modern and replaceable.

The guitar is called "Die Dicke" which means "The Fat" in German. There is a huge hole on the side that has been in there ever since the day I bought it at a small guitar shop on Centinela in L.A. for super cheap by this crazy Greek dude. I sing about it in our song "PCH Diamond" which is about an inspirational stay in SoCal. I sing "Greek sale ES125."

How was this gear used during the recording of your latest album?
Fynn: I wrote and played every song with this guitar on this and the last album, Imaginary Horse. To this day I can't really play a chord. I still use that one self-invented open tuning with the thickest strings I can find. I play it through a self-built combo I made out of different amps and cabinets a couple years ago and a preamp that I made together with "RedSunFX" from Munich called "ThePictureBoost." I also use an "Earforce" bass amp through a 2x12 "Earforce" cabinet to get a cleaner and bassier sound. Both amps together with the guitar through a nice preamp, create my sound basically.

How do you recreate your album (guitar/vocal/bass) tones in your live set?
Fynn: I use the same exact stuff. The only things that are different are the two close microphones that we use for our live sets on both amps. On the album, we always use two microphones twelve feet away from us in our motorcycle garage to get as much of the natural reverb as possible. Live I use a reverb for that. 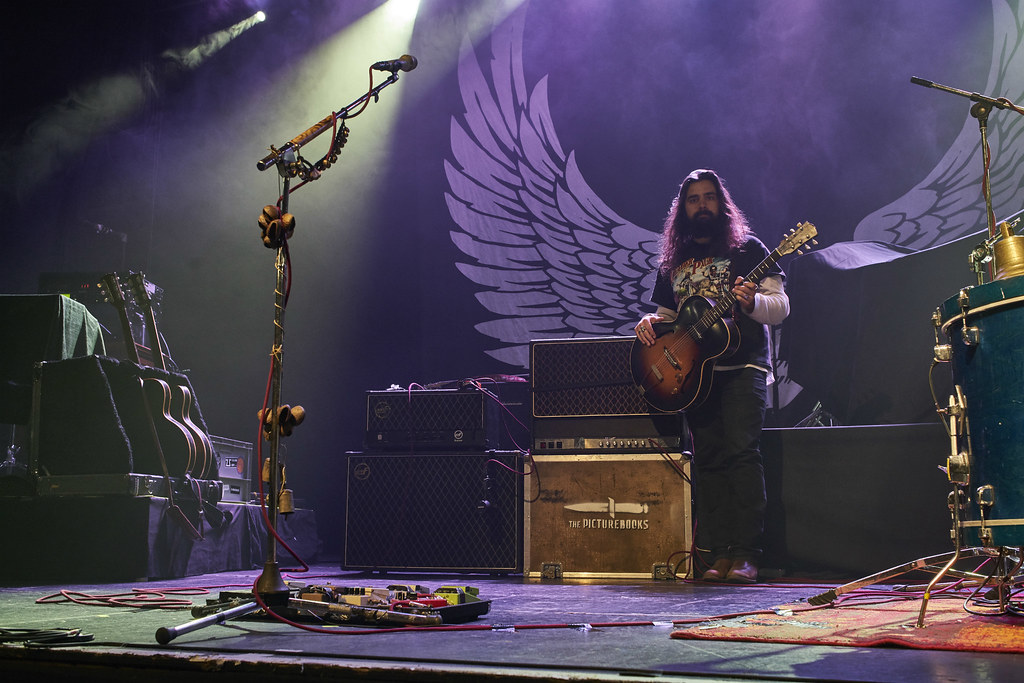 Do you have a backup for this gear, if so, what?
Fynn: I kind of do. I have another ES-125 but it's the thin version with 2 P90s and it sounds different. I also have an amazing ES-335 that sounds a lot different. They're both great but they don't sound as unique like my ol' big ES-125.

Give us your best "gear goes wrong" story.
Fynn: When we played the "Governors Ball" Festival, two years ago we had a little secret show in Brooklyn which turned out to be one of the raddest shows we ever played. Well, rad shows intend to go wild I guess, but this time it went extra wild. At some point, I fell into my drummer, Philipp's drum set. My headstock hit his forehead and made my back collapse and made him bleed pretty bad. For the rest of the show, I used the ES-335 thinking "Fuuuuuuuuuuuuuck!!!! She's gone! I broke her! I just fucking broke the best guitar in the world!!!"

The next day we played the "Governors ball." Luckily a friend lent me his "Hagström" Viking or so. Sounded awful! But it did the job. We flew over to L.A. the next day and I went to this guy in Long Beach who was the guitar tech for Korn on 7th Street and he fixed it in a heartbeat. My life was saved and we continued touring. Haven't had any major problems ever since. Just a loose cable or so.

Check out the video for the song "I Need That Oooh"