Band Links:
On April 13th, fast-rising New Jersey-based alternative metalcore group, This Curse will release their new EP, From the Darkest of Places. A real banger of an album, recorded with help from both Ricky Armellino (This Or The Apocalypse) and Andreas Magnusson (Fit For A King, Haste The Day, The Black Dahlia Murder), From the Darkest of Places can be pre-ordered digitally via iTunes, or on Big Cartel for physical copies. Before reading our new “Geared Up” interview with guitarist and vocalist Joey Galletta, head below to stream the band’s new single “Trauma Bond”.

What one piece of gear do you use to obtain your signature sound?
Joey Galletta: My sound starts at my guitar and pickups. I’ve used a lot of different amps and pedals, but my guitar has a very distinct sound and really makes a difference regardless of what I’m playing through. My main guitar that I use live and for recordings is an Ibanez RGIB6 Iron Label baritone scale neck 6-string. I started using this guitar about two years ago because I wanted something that could handle lower tunings better than a standard scale neck guitar, but still use 6 strings because that’s what I’m most comfortable writing and playing in. About a year ago, I swapped out the pickups for DiMarzio D-activators and that really brought this guitar to life for me and made it a much more dynamic instrument.

What about it makes it so important to you?
Galletta: I’ve always been a huge Ibanez fan and this guitar just feels like the perfect guitar for me. It handles the tunings that we play in with no issues (drop A and B) and has a very distinct, dark sound to it. The pickups really make all of my clean and lead guitar parts sound fantastic, but still have an edge when playing the heavier stuff. 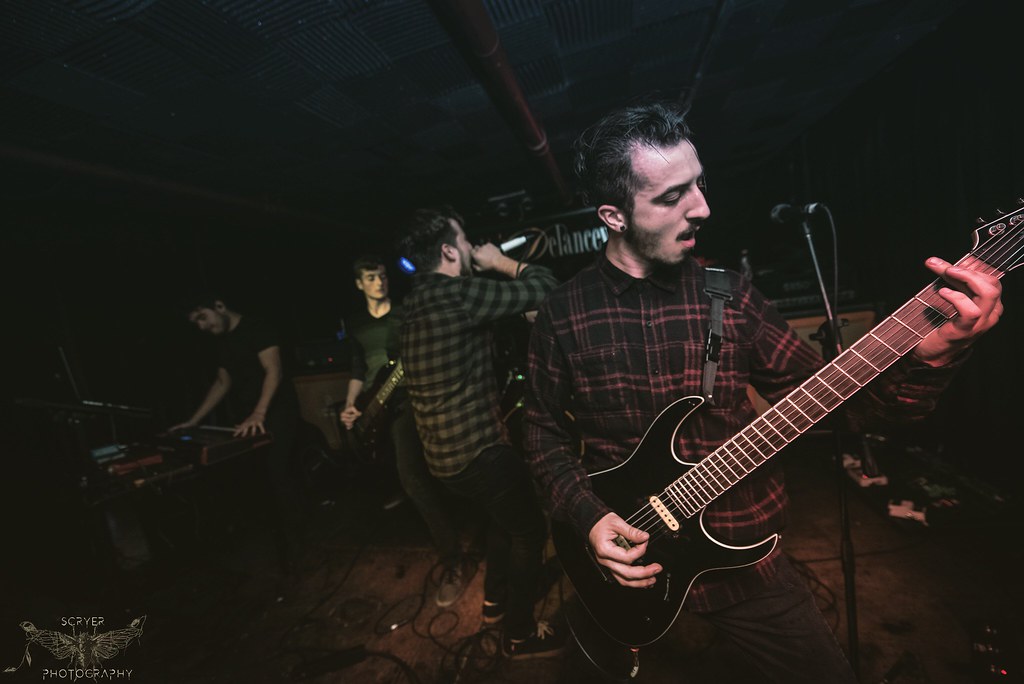 How was this gear used during the recording of your latest album?
Galletta: This guitar was used on five of the seven songs on the album for just about every guitar part. There were other options at the studio, maybe even instruments that would be considered “better,” but this was what I was comfortable with and I knew how to get the sounds I wanted out of it.

How do you recreate your album (guitar) tones in your live set?
Galletta: Recently, I picked up the new Line 6 Helix amp modeler and I’m absolutely loving it. I’ve been able to dial in my guitar tones pretty close to what we had on the album, but the Helix gives me way more flexibility than I’ve ever had with a traditional amp/cab set up. I used a lot of different clean and lead guitar tones on the record and this is the first time where I’m actually able to match all of it with one piece of gear. To be honest, I’ve never been into the digital stuff for live use. I use amp sims at my home studio (mainly Positive Grid’s BIAS) but it’s never something I’ve used live. The Helix totally changed my perspective of what’s possible with live guitar tone nowadays. I’m running the Helix into my Peavey 5150 and a Mesa 4x12 cab and also running it to the house. This set up sounds absolutely huge and I’m able to switch from my rhythm to clean to lead tones with minimal effort.

How long have you had it, how do you use it, would you ever change it?
Galletta: I’ve had the Ibanez RGIB6 for about two years now. Although I absolutely love this instrument for what we are playing now, I would definitely like to try some other guitars for the studio and live in the future. New gear, especially guitars, inspire me when I write and I feel like having a different instrument might help me come up with some cool ideas. With the Line 6 Helix, I only picked this up a few weeks ago, so this upcoming tour is the first time I’m going to be using it live and I couldn’t be more excited for it.

Give us your best "gear goes wrong" story.
Galletta: This one goes way back, but probably the best “gear goes wrong” story was when my rig and our keyboard players rig both decided not to work on stage at one of the biggest shows we had played at the time. We were opening for I See Stars at a local venue and after setting up, I started to realize that my entire pedalboard was not getting any power and none of my pedals were working. At the same time, our keyboard player’s software that he used for his live tones kept crashing. I ended up not using any of pedals other than a noise pedal and he eventually got the software to work, but the sound guy was so mad at us for taking so long to setup. We started to play and about two songs in, our vocalist (who at the time also played guitar) put down his guitar and was just doing vocals because his guitar completely cut out. At this point, all we could do was laugh it off and continue to play, but this was also the moment where he decided to just be the frontman of the band and no longer play guitar live.

Any final thoughts or comments on the gear?
Galletta: I am the kind of person who gets a few pieces of gear and really tries to get the best sound out what I got. I know a lot of people who are constantly buying/selling gear, always changing their setup, and I genuinely do not think that is always the way to get the best sound. I learn new things about the gear I have almost every day and it continues to help evolve my sound. Your tone starts at your playing and your instrument, so practicing and having an instrument that you really feel comfortable with is most important.

Check out the band’s new music video for the single “Trauma Bond” here.