Band Links:
Louisiana's Vermilion Whiskey are set to release their critically acclaimed new album, Spirit of Tradition, on February 17, 2017 via 10 South Productions. If you like '70s-era classic rock mixed with a tinge of metal, then you will fall in love with the group's sound. In anticipation of the release, guitarist Carl Stevens caught up with us to discuss his Orange OR100. Check the interview and be sure to also crank up their track "Road King" below!

What one piece of gear do you use to obtain your signature sound?
Stevens: This would definitely have to be my Orange OR100; I use the dirty channel 100% of the time with no effects.

What about it makes it so important to you?
Stevens: The Orange lets me have a nice thick distortion that cuts through the mix, which is important for a full band sound.

How was this gear used during the recording of your latest album?
Stevens: We pretty much left everything where we usually play it, just dialed the gain back a little bit. We like to have a little more gain in live situations, but the mics pick it up much differently than our ears do when everything is cranked up.

How do you recreate your album (guitar/vocal/bass) tones in your live set?
Stevens: Pretty simple, just plug it in and play. LOL! That's what's so great about my setup, the simplicity and the sound make it a joy to play on!

What are the major pros and cons?
Stevens: As stated before, the simplicity of setting my Orange up would be one of the biggest benefits of using it. The only thing I don't care for with the amp is the clean channel, it has to be the cleanest sound I've ever heard on an amp, there is just no breakup to it. I hooked up an attenuator to it once and cranked it to 10...still clean!

Do you have a backup for this gear, if so, what?
Stevens: My backup an ENGL Savage 120, it's bad-ass and I love it. I have played it a few times during practice to just have some fun with it. It just doesn't fit the sound that we're looking for. 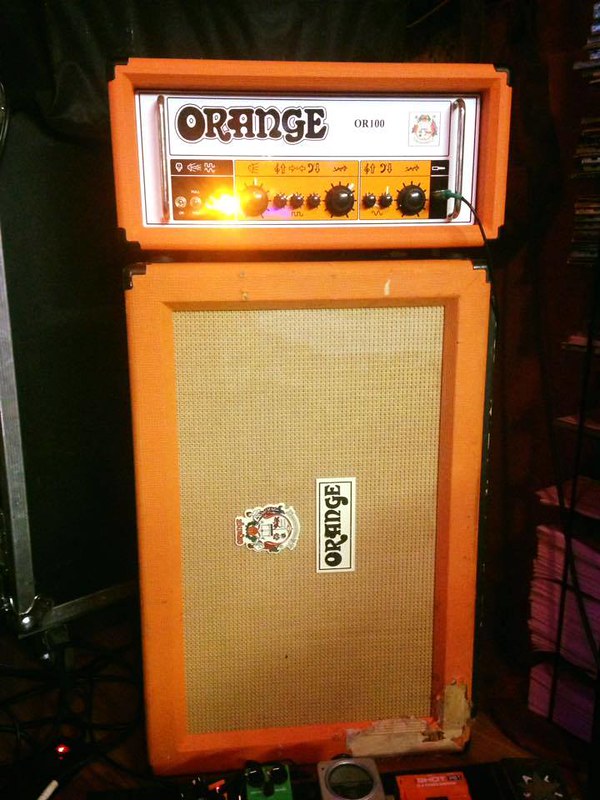 How long have you had it, how do you use it, would you ever change it?
Stevens: I think I've been having my OR100 for about 4 years now, still rock solid as ever! I could see myself changing out for another amp if it was the right one, the simplicity of use and sound are hard to beat though. It would have to be one killer of an amp!

Give us your best "gear goes wrong" story.
Stevens: That's pretty easy, haha. We were playing a show at a place called Clicks, in Tyler, TX. The show is going all good until my big dumbass foot "clicks" off the power strip that my pedal board and singer's wireless receiver is hooked up. So both of us are now totally silent, not knowing what the hell just happened. The monitor engineer was off smoking a cigarette, and the FOH engineer has no idea what is going on and can't figure out where this damn switch was. That sucked! It takes a story like that to take my Orange out though, that what I love about it, just turn it on, crank it up, and start playing. It's a super-dependable amp!

Any final thoughts or comments on the gear?
Stevens: I like to achieve a good sound by using less. The only effects that I have are a delay and a wah wah, I use my volume knob as my clean channel, and love to just let the guitar come through the speakers. Good ol rock n' roll!!

Check out the song "Road King"