Band Links:
All aboard?! With less than five weeks to go until South Africa’s biggest Pirate Festival, it’s only fitting that we chat to the ultimate band of buccaneers; Alestorm!

Swashbuckling vocalist Chris Bowes couldn’t hide his excitement as he talks about Alestorm’s upcoming 2019 tour to South Africa, “It’s been far too long since we’ve been to your silly country and we’re excited to be back! We’re so excited to be back because we love ticking off countries, so yeah, it’s going to be a lot of fun.”

This is not the first time Alestorm has invaded the sunny country but this is the first time for guitarist Máté Bodor. As Chris states, “Máté joined the band very soon after our last South African gig so I think this will be very exciting for him because this is one place that he hasn’t been to. I think he wants to see an elephant or something.”

Speaking of elephants, Chris reminisces of the last Alestorm tour in South Africa when they got thrown in the back of a van to go see the bush. “The last time we were there, a couple of fans came up to us were like ‘hey, you guys want to go to a safari or something tomorrow?’ Our flight was in the evening so that morning, they just came to our hotel and they were like ‘jump in the van’ and we drove-off. It was great! We went into the countryside to see all the nature and it was great because usually, people think ‘oh, you’re in a band and you get to see stuff around the world.’ You don’t. You get to see airports, venues, and hotel rooms. This time though, it is a whistle-stop so, unfortunately, no time to see your beautiful country.”

From Alestorm, here is the music video for... “Alestorm?” from the band’s No Grave But The Sea album.


Travelling is a big part of most band’s repertoire. For Alestorm, travelling is the only way the band of buccaneers actually get to see each other. As Chris explains, “I live in the U.S.A., our guitarist Máté lives in Hungary, Gareth (Murdock) (bass) lives in Ireland where Peter (Alcorn) (drummer) also lives and our keyboard player Elliot (Vernon) lives in England. Everybody moves all the time so it’s quite confusing to keep track of everyone. The internet is a wonderful tool. We send our tracks through and then we put it all together in studio. We don’t rehearse together, we’ve had like two rehearsals in (the past) ten years. We had one two years ago, when our new album came out and one in 2011. Elliot joined the band just after our second rehearsal, so he’s never had one. He just winged it and it was great!”

Winging it is second nature to Alestorm but Chris assures us that it’s just the nature of the songs. “I’ve no shame in admitting our songs are really dumb and simple. It’s like three chords and a lot of shouting about pirates. If our songs were difficult, then this band wouldn’t work being spread across the world. Alestorm is a fun band and we don’t put too many restrictions on the band. The only restriction for me is I’m the singer and I don’t sing. I just do dreadful vocals. That’s why I wanted to be in Gloryhammer where I can sing actual notes with melodies. I’ve got many things I want to explore musically so it’s good to not be a part of one band only.”

As for Alestorm, they are busy touring but rest assured that the sneaky pirates are also working on something new! While Chris couldn’t spill all the rum on this he did say, “Next year it’s back in the studio for us so we can create a new album and get going again!” This will be the band’s sixth album release and time will tell how it goes along. 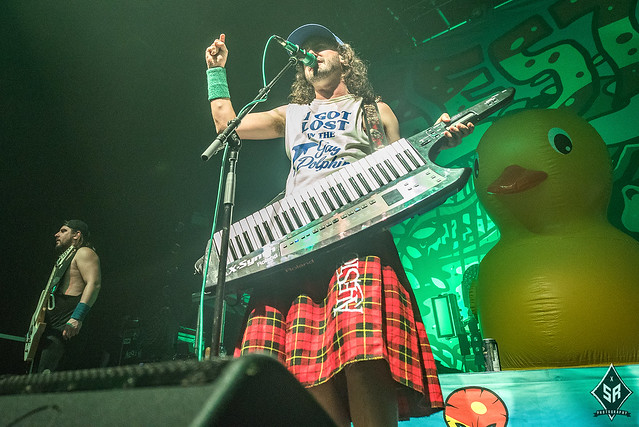 Catchy, riffy and a whole lot of rum; that’s what Alestorm sounds like! If you sail towards Mercury on September 5th in Cape Town, South Africa, and Marks Park on September 7th in Johannesburg, South Africa then you are in for a treat! According to Chris, the biggest sold-out Alestorm show took place in Tilburg in the Netherlands earlier this year. As he elaborates, “We had about 3,000 people come to support us! It was amazing! Atreyu is a cool band and we haven’t played with them before so that’s where the exciting bit comes in. It’s very exciting for us and we look forward to Pirate Fest! I think everyone is going to out-pirate us and may have a lot better costumes than we do!”

South Africa, can you out-pirate the band of buccaneers? Let’s see how savvy you really are! We've designed a mini-treasure hunt for you. The prize? Two tickets to Pirate Fest 2019 in Cape Town or Joburg. (Ts & Cs apply, ticket do not include accommodation and transport. This competition closes on Friday, August 23rd, 2019 at midnight SAST and the winner will be selected at random and notified. Be sure to “Like” the PureGainAudio.com Facebook page!)

Answer the following questions in the comment section below. Have a read through PureGrainAudio’s Pirate Festival articles for the answers!

01. What does Máté from Alestorm wish to see?
a. Lion
b. Rhino
c. Elephant

02. Who are Alestorm excited to play with at Pirate Festival?
a. Gloryhammer
b. Atreyu
c. Sabaton

03. What is the name of the events company responsible for Pirate Festival?
a. The Kraken Is Alive
b. The Sleepy Kraken
c. What's Kraken?

We’ll see you at Pirate Festival 2019! Tickets on sale now!

How about a “Drink” or two while you’re out at Pirate Fest next month, hmm?