In Conversation with PRINCE OF LILIES: PYN DOLL Breaks Down His Long Musical History and Brand New Band

Band Links:
Artists are always creating. In a rural village called Avdou, on the Greek Island of Crete, there is a haven where creative people of any medium can go for inspiration or reinvention. It is called the Ikarus Artist Commune, and Dead Kennedys singer Jello Biafra, Flogging Molly, Grouplove, and other prominent acts in the music world have stayed there, along with novelists, painters, and renowned photographer Bob Gruen. Its mountainous surroundings and low-key vibe appear to be conducive to bringing new creations into being.

Barb Wire Dolls/Royal Distortion guitarist Pyn Doll and his friend and fellow surfer Matt Wessen founded Ikarus in 2004, and by 2008, it was constantly overbooked. Greek natives Pyn and his wife, singer/songwriter IQueen, formed the punk band Barb Wire Dolls there in 2010. The Dolls’ raging lyrics and onstage aggression were undoubtedly fueled by the Greek government-debt crisis and ultimately proved to be the reason they left their homeland. After seeing Barb Wire Dolls play the Whisky in 2015, rock legend Lemmy Kilmister (Motorhead) was so impressed with their performance that he signed them to his record label, Motorhead Music. Since their inception, Barb Wire Dolls have played an estimated 900 shows spanning 25 countries; in 2017 the band took a hiatus.

Listen to “The Year I Broke,” the title track from the band’s debut EP:

During a call with Pyn from Ikarus, where he and IQueen have been surfing and revitalizing, he talked about Prince of Lilies, his latest band. The trio, featuring Pyn on lead vocals, IQueen on bass and backing vocals, and a drummer, who remains undisclosed, released their debut EP The Year I Broke (stream it on Spotify) in July, and will begin a month-long Wednesday night residency in November at the Redwood Bar. Influenced by bands like Nirvana, Dinosaur Jr, and the Pixies, Pyn’s aim with Prince of Lilies is to play brutally-loud rock with minimal production, a la Seattle grunge.

Charlie Steffens’ exclusive shots of Pyn Doll and IQueen, both live and chilling out: 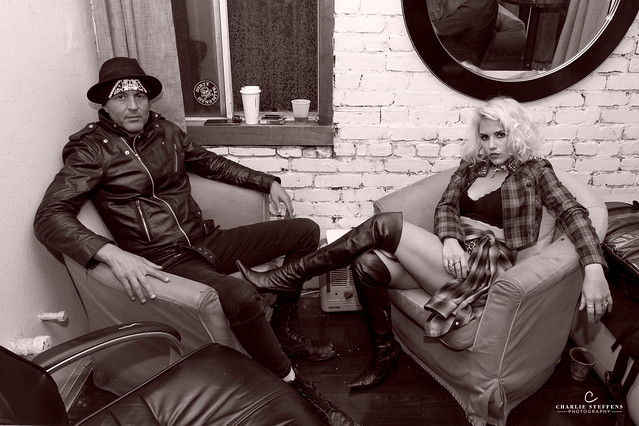 The roots of Prince of Lilies began while Pyn was still in L.A., just after Royal Distortion had wrapped up. With the musical clay that would eventually form Prince of Lilies, Pyn flew to Chicago to record with renowned producer Steve Albini, who engineered numerous top-selling records, which included Nirvana’s seminal album In Utero. Pyn’s working relationship with Albini dated back to the Barb Wire Dolls 2012 release, Slit.

“Steve Albini pretty much captures the band live as best as possible,” Pyn says. “No one can do that better than him. He put a little bit of effects on one or two songs, like a little bit of natural analog delay on some of the drums, but it’s absolutely as real as it gets.” Within three days Pyn and Albini recorded 28 tracks, while under the influence of Led Zeppelin’s BBC Sessions.

With strong tracks devoid of run-of-the-mill digital trickery, Prince of Lilies’ sound is genuine and infectious. On the EP’s first track, “I Want to Know,” Pyn lays himself open as a vocalist, juxtaposing croon to scream, while immersed in the wall of sound. “When you play with just a guitar, bass, a drummer, and no effects, your songs have to be something that keeps attention. It’s not going to be because I’m jumping around or not. It’s because the music’s going to pull people in. I’m really stoked on this album.”

Prince of Lilies debut album, The Year I Broke, was released on July 12th. Check out the artwork:

In its touring form, Prince of Lilies will feature IQueen, who, in a short period time has learned bass chops that are comparable to the bassist heard on the record. Having fronted bands prior to Barb Wire Dolls, Pyn is excited to be singing again and reveals that IQueen is happy not being the front person. “You cannot not sell IQueen,” says Pyn “We got on 26 magazine covers with the Barb Wire Dolls internationally, and I would say that on more than half of them it was just her. We understand that.” The band will be engaging through the music, not the image.

Pyn says that he and IQueen are single-mindedly focused on the band: “It’s our baby project now, that we want to do. We essentially put everything else on hold. I’m just like so happy that it turned out so good… we’re fully committed to it.” Sticking to the DIY ethic, without a manager, agent, or publicist, Pyn is confident that Barb Wire Dolls fans and simple word of mouth will generate a buzz. “This thing is only going to be about the music. It’s going to do exactly what we want it to do. We just want to bring back the real rock n’ roll, that real sound. I mean, there was literally no, ‘Oh this will be the single, or this has got to be short, or this has gotta be longer.’ Let’s play it how we feel it. As we keep saying, ‘Let the music find its own way, it will because it is pure, and pure naturally finds its way.’”

Prince of Lilies will be bringing back the Seattle Sound every Wednesday in November at the Redwood Bar in Los Angeles, California. Cover charge is five dollars with special guests to be announced soon.

Check out another track off of Prince of Lilies’ debut The Year I Broke with “I Want To Know:”