In Conversation with SOUTHERN AVENUE: The Blues Rock Phenoms Get Soulful at Doheny Blues Festival 2019

Band Links:
Southern Avenue could be considered an anomaly when compared to other bands of the blues genre.

Ori Naftaly, native to Israel, already had the foundation—he attributes his musical palette, which includes a love for the blues, British rock, and jazz, to listening to his dad’s music collection. He became an accomplished guitarist before moving to Memphis, Tennessee in 2013 to pursue his lifelong dream of being a working musician. He started a blues band and toured the United States, but soon became dissatisfied, because not long into his venture he met Tierinii Jackson, a Memphis native. Naftaly realized she was the best blues singer he had ever heard. In addition, Jackson introduced Naftaly to her sister, Tikyra, a drummer who also sang.

The sisters’ musical background began with both parents, who are musicians, and much of their childhood was spent singing gospel music. Their parents were so religious, the women had never been exposed to music outside of their church.

Joined by Jeremy Powell on keyboards, Southern Avenue toured in the U.S. and Europe right away, and within a year the band had signed with venerated Stax Records, taking their name from the street which leads to the record company. Releasing their self-titled debut in 2016, Southern Avenue blended rock, blues, R&B, soul, funk, and gospel, interspersed with occasional horns. The band’s sound and song lyrics defy the ages of its young musicians, and the old adage of having to be old, destitute, or heartbroken to play the blues is immediately dispelled after hearing a Southern Avenue song. They are truly one of a kind.

It’s very hard to not want to “Keep On” when listening to this band wail.


Currently, the band is playing dates all over the U.S. in support of their second studio album Keep On, which was released on May 10th, via Concord Records (find various streaming, download, and purchase options here). PureGrainAudio met with up with Ori, Tierinii, Tikyra, Jeremy, and new bassist Evan Sarver after their arresting performance at Southern California’s annual Doheny Blues Festival.

“We don’t write about the sun and the moon and the trees and the wind,” says Tierinii. “I think we’re all cool with that. But we have so many things to say that you can only say through music. We have so many subjects and so many things we have on our mind that we’re never going to have time, in my opinion, to even get to the wind and the trees and the sun and the party. We write when we feel. And we write when we need to write as a job too. We’re all like very emotional people so I think it comes out in the lyrics.”

“I think all the songs on our album are, in a way, our testimony to our feelings and our story and our journey,” Ori adds. “It doesn’t get more real than that. We don’t sugarcoat anything.”

Tierinii says that she and her bandmates are united in their message of uplifting people while promoting equality and peace. “It’s our responsibility to say the things that are kind of hard to talk about. That’s what I love about writing music, is that we can say what other people kind of feel that’s difficult to talk about. But we say it and they feel like they’re not alone. We came from the church. I think the love of soul music is what connects us all. It could be anything. It could be R&B, it could be reggae, it could be blues.”

Photos of the musicians performing like there’s no tomorrow at Doheny Blues Festival 2019: 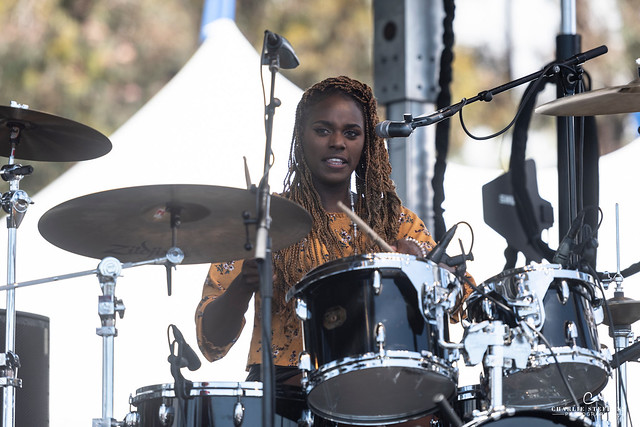 “The way we deliver it: the songs, the lyrics—it’s so in your face,” Ori says. “We’re just lucky to be doing what we’re doing, and touching people, basically. Today was overwhelming,” referring to the crowd’s enthusiastic response during the set.

“You can be moved, and then you can be moved enough to tell us about it,” Tierinii says. “I can feel the energy and see on people’s faces when they’re moved and it makes me feel really good. But when they come up to us and they talk about what they’re going through it takes us to another level. It’s very humbling.”

“I want to make it my mission to make our fans feel like they’re not just fans of Southern Avenue, they’re part of us, the Southern Avenue family. I think the message of acceptance and uplifting each other is very, very important, because we all need somebody to say, ‘Hey, you’re not alone.’ We all need a family, a support system. We’re all in this together. So many days I feel like I’m not understood, or I can’t explain what I’m feeling. Then I get onstage and people just connect, even though they still don’t l know what I’m feeling. It’s like a comfort.”

Tikyra cites the track “We’ve Got the Music” as Southern Avenue’s credo: “As much as we travel, we’ve gotten the opportunity to meet so many different cultures and be in situations where there’s a language barrier. Even here at home. It’s like a stroll in the park, a memoir of how we communicate. We may not look alike. We might not sound alike--but we got the music.”