Band Links:
Norwegian death pop band, Blood Command just released their latest EP Return of The Arsonist (grab a copy via BandCamp) last month through Norwegian label Fysisk Format. The quartet is a truly one of a kind creation, bridging the gap between hardcore, heavy metal, pop and punk to create something you’re unlikely to hear anywhere else. Return of The Arsonist is a conceptual successor to the band’s 2011 EP Hand Us The Alphamale, particularly the opening track “Summon the Arsonist.” Its release follows a tour with Rolo Tomassi at the end of 2018 in addition to a short Norwegian trek completed earlier this month with definitive British alternative metal band Skindred.

Blood Command have spent a ton of time out tour in support of their releases and have played shows with the likes of Refused, Tragedy, Comeback Kid, and Gallows. They have also previously played at The Great Escape, 2000trees and Roskilde festivals. We recently spoke with guitarist Yngve Andersen to find out more about the very cool comic-style artwork for the new EP Return of The Arsonist in the latest edition of our UnCovered series.

What was the inspiration for the Return of The Arsonist cover artwork?
Yngve Andersen: We wanted the cover to be a throwback to our first three EP covers, with comics-style and a single face on it.

“Afraid of Water” is the fitting EP closer on Return of The Arsonist.


Tell us a little more about the artist that you used for the cover art. How did you go about finding them?
Andersen: The artist we used is named Robert Høyem. He’s an artist based in Bergen and has worked with lots of local bands. We had seen his work in several places during the years, but it wasn’t until I saw some pictures at a local vinyl-shop/bar called Apollon that we decided to try his services. He is very talented.

I’d say the cover art for the EP is some of the most inventive I’ve ever seen. How involved was the band in the creation of the artwork?
Andersen: We just showed him the first three EP covers, told him about the theme of fire on the record and told him about the colours. The rest was all him.

Being a fan of comic books growing up in the 1990s, the Return of The Arsonist artwork reminds me a lot of comic book/cartoon art. Did you leave that in the artist’s hands or was this the type of artistic style that you had in mind when it came time to do the EP artwork?
Andersen: We wanted it to look like a comic yes, which is why the first three EP artworks were made by Mads Andersen.

The cover art for Return of The Arsonist is some of the nicest cartoon art you’ll see.

If we could conceptualize it for a moment, the Return of The Arsonist cover art is very much open to interpretation. Is that what you wanted to achieve with the making of the EP art?
Andersen: Artwork for music releases has shifted more and more into something you see on a digital platform, whether that’s a Facebook header, Spotify or iTunes single. Since Return of The Arsonist is both a physical release and a digital release, the artwork needed something with a strong signal effect that grabs you immediately, as well as having a lot of subtle detail that you can read into when you have the vinyl copy. The artwork is open to interpretation, but that is true for all art.

Oftentimes album cover art is a representation of the songs contained on that album. Would you say that the art factors into ideas and concepts that spread through the ideas and meanings behind the songs?
Andersen: Well… the artwork has a lot of fire in it and the songs are about an unhappy arsonist in love so you could say there is a direct link.

Did Robert Høyem, who did the cover art, hear the EP beforehand? Or, did he just go in blind to the process?
Andersen: Robert got the songs beforehand, yes. I think that is important if you want the artwork to vibe with the music.

Check out some incredible examples of alternate versions and sketches of the Return of The Arsonist cover artwork: 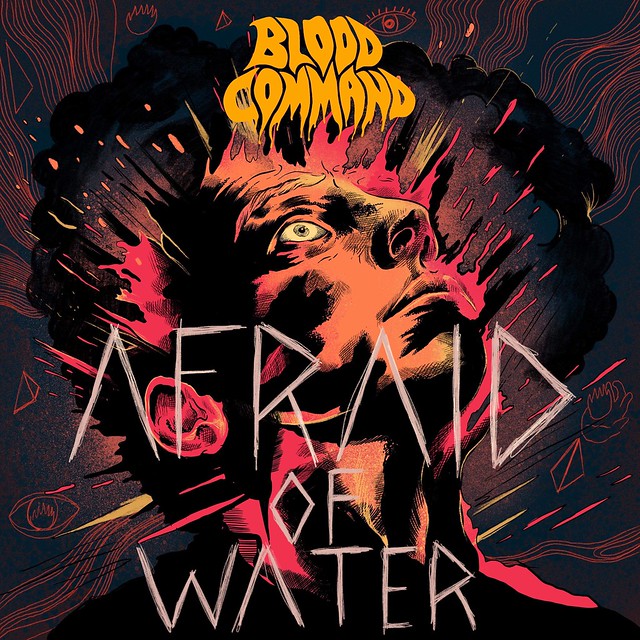 I noticed that you’re selling a t-shirt with a representation of the Return of The Arsonist artwork on it and it looks very, very cool. Did you first consider how certain artwork would translate to apparel and merchandise when you were first considering different artwork designs?
Robert Høyem (artist): Yes. In this instance that is a thing to consider when working with a band like Blood Command, that puts a lot of time and effort into making good artwork. However, the most important thing the band considered in regards to this question is that (the band) has always placed a lot of trust into the artist. In my case, I’ve worked with a bunch of bands over the last ten to fifteen years, and the difference between bands that make waves, with great music, great art and also builds a loyal fanbase is down to how they place trust in other professionals.

Blood Command seems to pick good collaborators and allow us to do our thing. When working with a new concept for a band, I prefer to work out an idea that translates into different kinds of merch ideas as well as other formats. This could be as easy as stripping back the colours or working out small designs or illustrations that can be placed into other contexts.

With the increasing popularity of digital music, most fans view artwork as just pixels on a screen. Why did you feel the artwork was important?
Andersen: The artwork is the first thing that greets you unless you hear the band first. It’s a big part of the package and experience.

How do you think the artwork will affect the listener’s perception of the EP?
Andersen: In my head, the artwork has much to say. Often more the layout and attention to detail tells me if the band just got lucky and stumbled on some good songs and showcases how the band can communicate and collaborate. As for the artwork itself, it sets the mood and contradicts and/or underlines the mood of the music. From a communication standpoint, the artwork should also appeal to the target group, not always in the broadest sense possible, but aim to speak loud and clear to the “awaketeam.”

“No Thank You, I’m More in to Fake Grindcore.” This is another energetic tune you’ll find on Return of the Arsonist.