Band Links:
We’re being a real ”giver” today by sharing with you something brand new from German band Giver. The hardcore quintet has just unleashed new music unto the world in the form of their second album, Sculpture of Violence, via Holy Roar Records. This new release offers something a little different, with songs that trend heavily in the direction of melodic hardcore reminiscent of noteworthy early 2000s acts such as Blacklisted, Have Heart and Modern Life Is War.

Giver had been raising the hype for their new album ever since November when the title track and music video first saw the light of day. What’s great about Sculpture of Violence is that it expands on the foundations of high-tempo, metal-themed hardcore that helped earn the band praise for their early 2018 debut, Where The Cycle Breaks. This is a worthwhile addition to not only the growing Giver catalogue but also the hardcore music of today.

The songs on Sculpture of Violence confront various serious themes and issues, including exploitative labour, the dissonance of religious discord, and ill-conceived concepts of masculinity that exist in the current social and political climate. Although the ten tracks that encompass the record can be bleak, there is a positive energy that is directed towards provoking change on both the personal and societal levels. As Giver continues to promote the release of Sculpture of Violence, we got a few minutes with the band’s bassist/vocalist Chris Schmidt for a different kind of chat, one regarding the artwork creation process for the record and how it came about.


What was the inspiration for the album’s cover artwork?

Chris Schmidt: “To be honest, this time the album title and the cover artwork emerged together as a compendium. We had several album titles in mind when having written most of the record and its lyrics. When Marie (the photographer) showed me a picture of a woman shot in bulb exposure (in a totally different setting and manner than the actual artwork) we thought that such an image could convey the idea of what Sculpture of Violence means to us the best. So we kind of came up with the specific cover idea together and Marie found this beautiful location for it with the stairs leading into uncertainty. However, we tried to do a lot of things differently in general with this record, and challenge ourselves on new levels than with our first LP, when making an album was already exciting enough. This time, we tried to make our art more holistic. A cover shouldn’t just be a cover to a record but a coequal part of a cohesive entirety. A video shouldn’t just be a video to a song but contribute to its vibe and message and make it more whole.”

The album cover for Sculpture of Violence is crazy-cool. Tell us about Marie and how you her?

Schmidt: “Thank you very much! The name of the photographer who shot the cover is Marie Laforge. She is still studying photography but has already done quite a lot of record covers alongside other interesting art-projects. She is actually my girlfriend and so I get a lot of input through her regarding visual arts. Fun fact: The first time I ever spoke to her was when I contacted her for our last record cover, but she didn’t really get back to me back then (laughs). I found her in a punk rock venue in Cologne.”

Sculpture of Violence was released on February 7th, via Holy Roar Records. Check out the beatiful cover artwork:

Please elaborate on the medium(s) used when creating the art. We’d love to know how the artwork was created.

Schmidt: “I am quoting Marie here; She likes to work with analog films when it comes to projects like this. It adds a certain layer of roughness and immediacy to the picture that you just don’t get with digital photography. Benny Demmer of Druckwelle Design who created the entire design for our last record, and who we were super happy to have onboard again this time for the rest of the artwork, also follows an equal style regarding the creation process. He goes to an actual copy shop to send his designs through the printer endless times in order to make them look remarkable and abrasive, rather than just relying on photoshop and that is why we love him.”

Would you consider the artist an additional band member, or someone contracted for just this piece?

Schmidt: “We definitely consider ourselves very lucky to have built a little circle of amazingly talented and nice people to work with on this (and the last) record over the years. Marie not only shot the cover but all of our band photos, and was there during both our video shoots to give helpful and constructive input all of the time. The person on the cover is Veronika, who is Julian and my old flatmate. Veronika studies acting here in Cologne and is also the main character in the video for ‘Every Age Has Its Dragons (Like An Empire).’ Adrian who shot the last video to our first LP shot and edited both of the videos for this one and is one of the hardest working, most talented and still humblest people we know. He also fills in on guitar sometimes and played bass in Giver for half a year when I spent a semester abroad. And Benny of Druckwelle Design has been part of the team for three years now. We definitely see these people as additional members of the band within the project that is Sculpture of Violence.” 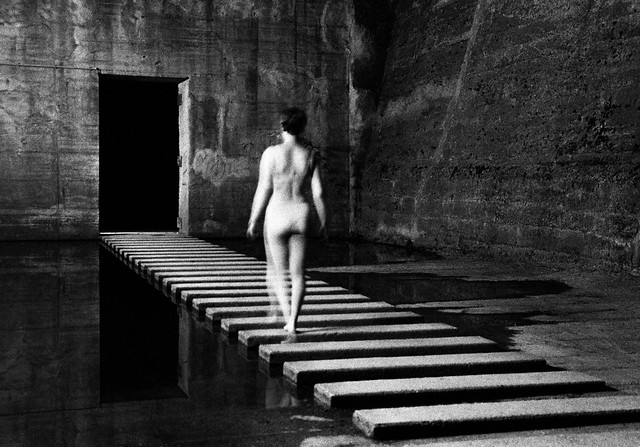 When people look at the album cover artwork, what do you want them to see or think?

Schmidt: “We don’t want them to see any certain thing at all. I guess that even the five of us have different feelings and interpretations of what is to be seen, and that is how it is supposed to be. We’re not filming documentaries or conducting scientific studies, but hope that we can offer something that rings differently in everyone and might help to get an understanding of yourself, society and your role in it on a more personal and emotional level. We like to keep things metaphorical to give room for interpretation. I think that that is something that art can actually do.”

What are your thoughts and/or the pros and cons regarding digital art versus non-digital?

Schmidt: “Of course, digital art means that accessibility of art is not an issue anymore. Any one of us can potentially listen to any album ever recorded at any given moment. Regarding music, I feel like the big problem I see in all the streaming platforms is how they make songs and music quantifiable. When every stream is counted, bands and labels start comparing themselves even harder and competition goes up. However, regarding visual arts, the non-digital world still offers you so many more options in room, size, fabric, and presentation of your project. We just printed our cover artwork on a bigger poster size and will give that to everyone buying an LP at our release shows and on tour, just because we feel like it is way nicer to be able to look at this certain picture in another format.”


Was the album art influenced by any of the themes explored on your new album?

Schmidt: “Definitely. Sculpture of Violence is a metaphor for mankind itself. We’re all products of our environment, the mass media, our parent’s values, advertisement campaigns, our friends’ expectations, and Facebook algorithms. It is insanely hard to come to terms with the fact that the world we live in tears you apart constantly, and living in this system means enduring the immoral contradictions that it is built upon on a daily basis. Still, in order to change it, we need to change ourselves and build alternatives within it. You don’t need to be who you think you are. Things can always be different. Does that make sense when you look at the cover?” (laughs)

How do you think the album art will affect the listener’s perception of your album?

Schmidt: “I hope that it can contribute to the feeling and idea of the songs and lyrics. But, generally speaking, I feel like anything you do as a band, whether it is the songs you write, the production you choose to record them, the way you behave on stage, the label you are on, the interviews you give etc..., all add to the ’image’ or vibe, or whatever you want to call it, that people have in mind when listening to your songs or going to a show. And all of that gives context to the songs and changes your perception of them. Man, bands are such a weird social construct, right?”