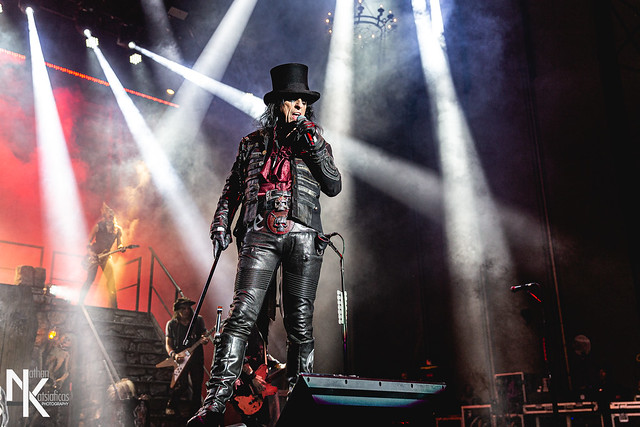 The undisputed king of shock rock, Alice Cooper, and his cohorts, accompanied by rockers Halestorm and opening act Motionless In White, paid Maine Savings Pavilion at Rock Row a visit on August 10th. We caught the nearly sold-out show in all of its magnificence at the brand new outdoor venue in Westbrook, Maine.

This lineup seemed to get folks out to the venue pretty early, with a crowd of several hundred already there for Motionless In White. With the age demographic for this tour being lots of 40 to 60-somethings and their kids, the band had their work cut out for them to try to win over so many who were unfamiliar with their music. They tried their damnedest to get the crowd going, and it worked to some degree but was more or less a losing battle trying to reach folks who were far too removed from their genre to be interested in it.

Whatever you think of the band, there’s no way to “Disguise” Motionless in White’s awesomeness.


Luckily, Halestorm, led by frontwoman Lzzy Hale, took things up several notches with an incredible performance. Hale’s vocal prowess is unmatched by most other rock acts, and she did not hold back on this night, belting out every note with her signature gruff-yet-beautiful vocal styling. The band kicked into things with “I Am The Fire,” and immediately had the crowd on their feet. Backlit by a dazzling lighting rig, the band continued through their set, pausing every now and then to address the crowd.

They’ve played here a few times in the past couple of years, which was evident in their stage banter about the new venue and lobster rolls. At one point drummer Arejay Hale whipped out a pair of 2x4 planks and started using them as drum sticks to celebrate how far north they were playing this evening. They would go on to rock their way through more fan favourites, including “Love Bites (So Do I),” “I Get Off,” and encore song, “I Miss the Misery.”

“Vicious” is the most recent single and music video from Halestorm’s latest, and fourth studio album of the same name:


After a bit of a wait for a stage change, the curtain fell and a dungeon/castle-themed stage set was revealed as Alice Cooper and his bandmates emerged. What ensued was one of the most stellar performances I’ve seen in quite some time. Striding around the stage with a scepter and a top hat, Cooper and his cohorts commanded the stage. Not only was the band impeccably tight, but the stage set itself was crazy. Complete with set changes, wardrobe changes, and a spectacular light rig, the production was completely nuts! Cooper brought out the hits right away, beginning with “Feed My Frankenstein,” and “No More Mr. Nice Guy,” the latter of which became the first big sing-along of the evening!

Things would continue to get weird, in a good way, with a giant inflated baby head with glowing eyes and dollar bill confetti during “Billion Dollar Baby,” and other antics during the rest of their set. Cooper closed the night out with “Escape,” and “Teenage Frankenstein.” All in all, it was a hell of a good way to spend a warm summer night. While this leg of the tour is over (Cooper is heading overseas), you can catch them back in the states for the next leg of the tour in November. Check out the full run of dates below!