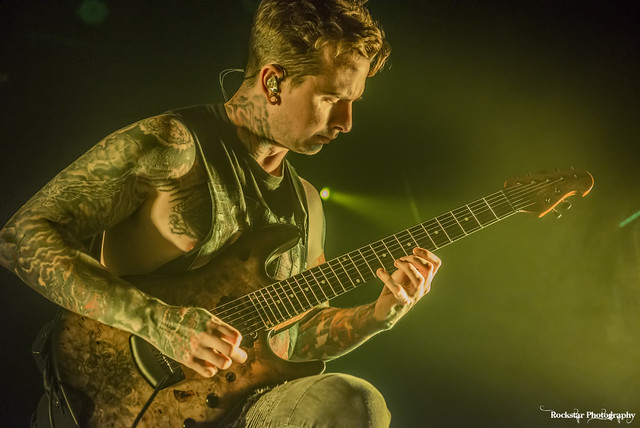 The City of Toronto was given a real treat last Friday, October 18th, when The Opera House hosted a metalhead’s delight; All That Remains, supported by Lacuna Coil, Bad Omens, and Uncured. This was the second last stop of their 42-city “Disease Of The Anima Tour,” which took the bands across the United States, Canada, with even an Australian run thrown in for good measure.

The first act of the night was New Jersey’s Uncured. Featuring brothers Zak and Rex Cox on guitars and vocals, Uncured is a very young band, but man can they play! They performed an exceptional live set, and did an impressive job of grabbing the fans’ attention. With their debut album already under their belt, Uncured is well worth a listen.

Virginia’s Bad Omens, featuring Noah Sebastian as vocalist, also carried out their duties of keeping the fans in attendance excited. They too played a solid set, though I had a tough time photographing this band. With a steady stream of fans pouring in through the venue doors, it was almost time for Italy’s Lacuna Coil, and when they finally did emerge out of the fog onto the stage, the place was packed to the rafters! You could cut the excitement with a knife, it was that thick. Everyone seemed to be in a fun mood tonight, well, it was Friday night after all.


With nine studio albums to their credit, the unique sound of dual vocalists Andrea Ferro and Cristina Scabbia, Marco Coti Zelati on bass, Didi Cavalotti on guitar, and Richard Meiz on drums, excelled in harnessing and maintaining everyone’s enthusiastic attention throughout their entire set. Both singers took turns at the front of the stage, each with an amazing voice, while the rest of the band performed their heats out; a really entertaining band to see live.

I saw Lacuna Coil about a dozen years ago, playing with Motorhead and Volbeat in the then Copps Coliseum in nearby Hamilton, and they already grabbed my attention back then, but, man, they sounded good on this night. I think this was my personal favourite of the night. They even gave fans a choice of two songs as the encore. Lacuna Coil played “Blood, Tears, Dust,“ “Trip The Darkness,“ and “Our Truth,“ as their first three songs.

After a quick stage set up, it was time for the evening’s headliners, American heavy-hitters All That Remains. Considering that there were a total of four bands tonight pumping fog onto the stage, the air was really thick by the time that frontman Philip Labonte, and the rest of his cohorts exploded into their set. With nine studio albums to their name, the Massachusetts natives didn’t waste much time chatting. Instead, it was just straight to business. Fans seemed to appreciate this approach with clenched fists pumping, heads banging and shouts of approval.

Featuring Danny Worsnop, check out the new All That Remains video for “Just Tell Me Something:“


By now The Opera House was so packed that everyone was just sort of floating whichever direction the crowd moved. It looked kind of surreal, and I think that was the reason there wasn’t much crowd surfing going on. You just couldn’t move! The media had to be led out the side stage door, just because there was no escape from where we were at the front. What an awesome night of metal this was. And finally on a Friday night, which means no getting up for work in the morning!

All That Remains’ Toronto Setlist:

All That Remains’ latest album Victim of The New Disease was released on November 9th, 2018, via Razor & Tie: