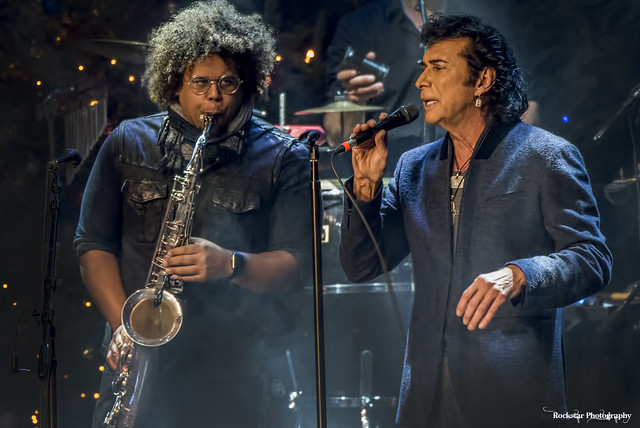 This was the fifteenth instalment of the annual Andy Kim Christmas Concert, held this year in the Queen Elizabeth Theatre on December 4th. There were no shortages of special guest musician appearances throughout the evening, performing with Andy Kim as well as on their own. Every musician was pretty much interchangeable and helped out whereever they were needed, anytime a new singer took the stage.

The very first song of the evening was the hit “Rise Up,” with vocals from Lorraine Segato of The Parachute Club. As soon as Andy Kim walked on stage everyone in attendance did rise up, so I guess the message got through.

Comedian Tracey Ullman did a couple of songs together with Andy Kim and Broken Social Scene singer Kevin Drew, as well as her one big solo hit from back in the ‘80s. Jake Clemons, the saxophone player from the E-Street Band, played the next few songs both with Andy as well as some of his own solo tunes. Men Without Hats singer Ivan Doroschuk also made a stop to perform the band’s two big hits “Safety Dance” and “Pop Goes The World.”

Get a view from the “Skyline” from Broken Social Scene off of their Hug of Thunder album:


After a short intermission for folks to stretch their legs or go for a refill, the second half of the show began. Canadian singer/songwriter Ron Sexsmith performed a couple of songs, as well as Sloan, Bif Naked, Jane Siberry, and Jessica Mitchell along with Tim Hicks.

It was a fun evening filled with songs from days bygone, and considering how long Andy Kim has been doing this charity concert, together with the Starlight Children’s Foundation, and for how long he’s been performing, he looks absolutely timeless.

All the evening’s musicians donated their time for this charity, and there were even 50/50 raffles to be won! A good evening filled with good music, and all for a good cause.
Share this: