ARCHITECTS, THY ART IS MURDER and WHILE SHE SLEEPS Unleash Holy Hell Upon Worcester, MA’s Historic Palladium [Photos & Show Review] 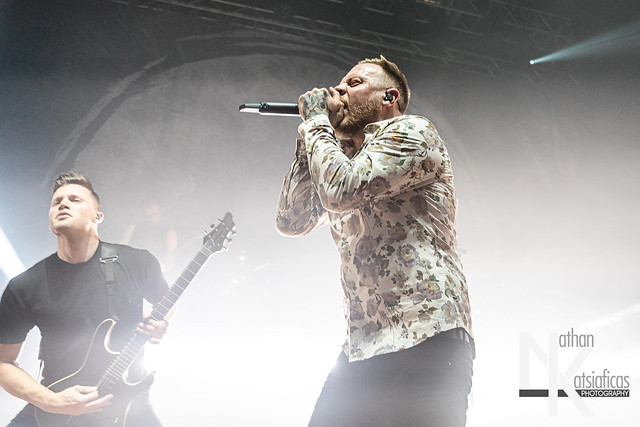 British metalcore behemoths Architects just wrapped up a run across a slew of sold-out stages in North America in support of their 2018 release Holy Hell. This tour has seen them playing alongside Australian technical deathcore act Thy Art Is Murder and fellow Brits While She Sleeps. We caught the tour in its final week last week on May 20th, as it arrived at the hallowed grounds of Worcester, Massachusetts’ Palladium, a venue that was instrumental to the birth and success of metalcore in the Northeastern United States.

Fans were lined up hours before the doors opened and quickly filed into the lower level of the venue for opener While She Sleeps’ set. WSS has few equals when it comes to on-stage energy, and tonight was no different. Even in the opening slot, they managed to put on one hell of a spectacle, both on-stage and off of it with singer Loz Taylor at one point jumping into the audience to crowd surf while delivering vocals during “Civil Isolation,” and at another point scaling the raised VIP balcony by the stage and dropping down onto the audience to crowd surf once again. Taylor has long struggled with issues related to his vocal cords and has even had surgery on them in the past. On this night, however, his vocals sounded pretty on par with their records, especially on the material from their new release SO WHAT?. Here’s hoping they come back soon for a headliner so fans can see a longer set from them!

“Human Target” is the latest music video from Thy Art Is Murder’s fifth album of the same name.


Up next, Thy Art Is Murder, or should I say “Thy Art is Molotov Solution,” took to the stage with a bit of a surprise for fans who haven’t been keeping up with the band on this tour. In place of vocalist CJ McMahon, who is home for the birth of his child, was Nick Arthur of Molotov Solution. Were it anyone else filling in, they would probably have a tough time filling McMahon’s shoes, but Arthur was more than up for the task, belting out every guttural note with precision. As a longtime fan of the now-defunct Molotov Solution, seeing him back on stage and playing with TAIM made for an unforgettable performance. And with a setlist featuring hits like “Coffin Dragger,” “The Purest Strain of Hate,” “Fur and Claw,” and “Holy War,” Thy Art Is Murder fans sure got their money’s worth.

Now, all warmed up and sweaty, Architects worked the crowd into a frenzy with their opener “Death Is Not Defeat.” And upped the ante with “Modern Misery” and “Nihilist.” Architects are one of those bands that sound great on record, but sound even better live. Every song in their set on this night was executed with perfect precision down to the smallest detail, and with raw emotion and energy that is not as readily conveyed on a recording. The crowd ate it up, echoing their energy back at the band tenfold, and singing along en masse, as in during “Royal Beggars” where the entire venue seemed to be shouting the title line in unison.


Their full set had something for almost any fan to like, with plenty of new material, and a few somewhat older tracks, like “These Colours Don’t Run,” and “A Match Made In Heaven.” That being said, one would think they might dip just a little further back into their discography for longtime fans, to hits like “Follow the Water” or “Early Grave,” or literally anything off of Daybreaker. Then again it may be that it’s too hard with the passing of founding member Tom Searle to play such old material that was all penned by him. In any case, the newer records are great, and tracks like “Deathwish,” “Naysayer,” and “Doomsday,” will never go over poorly live. There was not a single person in that venue that looked disappointed at the end of the night, with most sporting a sweaty brow and a grin.

Architects are playing a ton of festival dates overseas in Europe and Australia this summer but will be back in the fall for the Louder Than Life Festival and Monster Energy Aftershock in September and October respectively. Here’s hoping they do another tour out here coinciding with those dates!