ARCHSPIRE, BENEATH THE MASSACRE, VULVODYNIA and INFERI Deliver a Tech Death Extravaganza in London [Photos & Review] 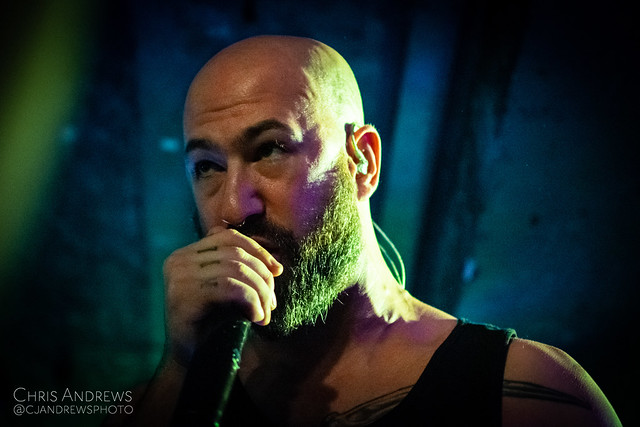 Vocalist Stevie Boiser of tonight’s openers Inferi described Archspire to the crowd as “The living embodiment of Sonic The Hedgehog,” which summarises their none-so-fast approach to technical death metal, or tech death. Sandwiched between these two artists are Vulvodynia and Beneath The Massacre, giving a stacked bill towards metal’s extreme end for a Monday night at The Underworld in Camden, London UK.

Inferi open the night with their debut UK show and, with no surprise, bring blast beats and slamming riffs. Performed full of enthusiasm, it’s plain to see that they’re enjoying their first time in London, embodied most by vocalist Boiser waving his arms as the infernal crowd conductor at the front of the stage. The tight stops in the entire band for “Behold the Bearer of Light” show their professionalism; this is a cut above a band you’d usually expect to find opening a show on a Monday. Here’s hoping they return soon and bring their take on the tech-death genre back to our shores ASAP – and when the band ask the crowd if they should come back, the roar in response shows everyone here agrees.

“Cursed Unholy” gives a taste of Inferi’s sound and some of the energy of their live show:


Vulvodynia have married top-notch music with meme mastery to grow a significant fan base across the globe. The South African slammers incite a visceral response from the crowd right from the beginning of their set, with all near the band opening up into a pit with a mass of flailing hair and bodies in front of the cramped stage. The intricacies in their music are harder to pick out than for Inferi, but the rhythms are strong and the bouncing mass in front of them don’t seem to mind – one of the comparisons between slam and tech. They put on another killer performance for the night, with the freezing cold of the British winter from outside now completely banished.

Beneath The Massacre have been quiet for some time – their last release was 2012’s Incongruous – but in joining this tour and new single “Autonomous Mind” they’re marking a serious return to the scene they were one of the leaders of some 10 years ago. Accordingly, the audience changes in dynamic somewhat for their set; there’s more space on the floor for the more mature members, and the scene newbies who know their history, to bust a move to some of the finest tech-death laid to record off of stand-out album Dystopia (2008). Completing a somewhat short feeling set for a main support they end all too soon, with vocalist Elliot Desgagnés leaving everything on stage after an intense performance.

Beneath The Massacre’s timeless quality shows through in 2010’s “Society’s Disposable Son”:


On record, Archspire sound like a .50 calibre machine gun; live this feels more like a full-on artillery barrage, with the sheer speed of the band’s playing assaulting your ears and the bass end punching through your core. Once you see through the original shock of quite how extreme they are, though, you can pick out their technicality and the only reaction is awe – every single one of their 300-plus BPM notes is hit with precision, with outrageous sweeps and arpeggios throughout the low end chugs.

Right from the beginning of their set, the crowd opens up across the entire front of the stage making photography amongst the pit almost impossible, and retreating further back in the historic Camden venue is essential. Their most violent pit, however, is reserved for the song “Relentless Mutation,” after vocalist Oliver Rae Aleron shouts “Fish on this side, chips on this side, mushy fucking peas in the middle.” Those not busy throwing themselves at each other are instead laughing, with Aleron full of charisma and stories for the audience.

There’s no let up to Archspire’s performance as they play Relentless Mutation (2017) in full, and with two years since its release, you could hope that next year will see some new music from the band. On the back of tonight’s performance, showing that an artist can be insanely technical on record AND replicate it live, we can hope to be blessed with such a gift from one of the world’s fastest bands.

"Involuntary Doppelgänger" opens up Relentless Mutation, and you can check it out below:


Archspire’s Relentless Mutation was released on September 22, 2017 through Season of Mist