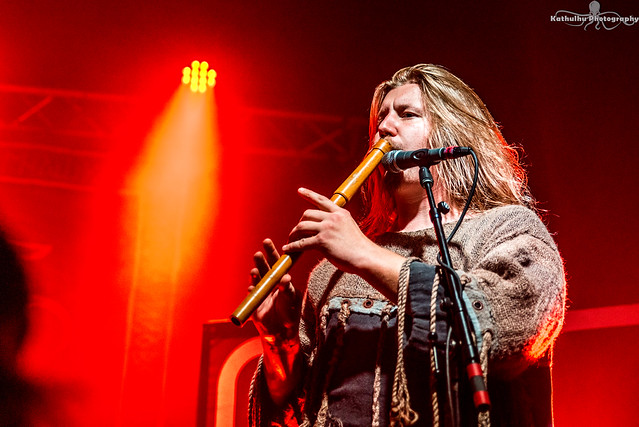 “The Pagan Rebellion Tour” was in full swing by the time Russian folk metal band Arkona headlined Mesa, Arizona’s Club Red with support from Estonia’s Metsatöll. We gave them a warm welcome on September 10th with local folk metallers Adavant opening the show (yes there is folk metal in Arizona!).

Arizona is very fortunate for having venues like Club Red and standout local bands, and Adavant is no exception. They’re a fun band to watch and they don’t take themselves too seriously. Bands with keyboardists take note, Andy The Cunning doesn’t stand in the back and occasionally make aggressive faces. He gets right up front and makes himself and the instrument a vital part of the stage performance.

Next up were Baltic bards, Metsatöll. Guitarist and singer Lauri “Varulven” Õunapuu is not only an expert at traditional Estonian instruments, but his vocals are hauntingly deep. Metsatöll seamlessly blend folk music with heavy metal in a way that sounds primal yet modern. All of their songs are sung in Estonian, some in archaic Estonian, which adds to the primordial atmosphere of their performance.

Then Arkona took the stage. Masha Scream appeared in a hooded cloak under dim blue lights, chanting and beating a drum. The rest of the band soon joined her on stage and exploded into song. They fuse traditional Russian music and instruments with a raw, heavy sound. Their sound is heavier than most folk metal bands and their performance is highly energetic, without being campy. Their most recent album, Khram, was released in January 2018.