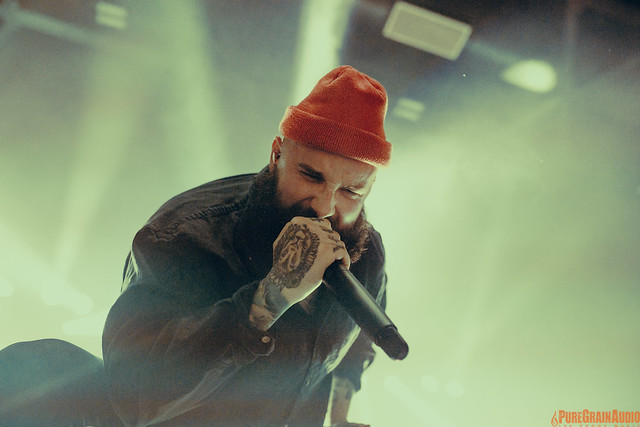 Filling a room with thousands of people doused in festive red and green color combinations, August Burns Red jingle bell rocked their way into Christmas by putting on their annual metalcore holiday show. Performing their popular album Constellations in its entirety, the Lancaster, Pennsylvania natives also incorporated a couple of their instrumental holiday songs to get everyone in the Christmas spirit. The lineup consisted of multiple killer bands such as Like Moths To Flames, Miss May I, and Knocked Loose and I was able to catch most of them put on some amazing live performances.

August Burns Red are one of the staple bands that emerged from the Lancaster hardcore scene and have since then gained millions of dedicated fans all over the world. As a Pennsylvania native myself, Lancaster is known for Amish culture, horse and buggies and the inappropriately-named village Intercourse; but out of all that, I’m most grateful that August Burns Red is a band we can call one of our own. The Grammy-nominated group gives one hundred percent during their live performances which is no surprise as to why they have become so relevant over the years. With their highly melodic guitar riffs and powerful vocals, August Burns Red brought the energy to their Christmas Burns Red live show.

“All That You Lost” by not watching this Like Moths To Flames video was our respect.


Like Moths to Flames was the first band I caught at the start of the night and delivered an eccentric performance. With their raw, hard-hitting vocals by lead singer Chris Roetter, the metalcore group had fans bouncing off of each other. Their setlist consisted of a healthy balance of old and new tracks to please those who may not be familiar with their older songs. Like Moths to Flames brought the heat and the fans gave it their all during their impressive performance.

Miss May I was next to perform and as my first time seeing them live I was absolutely blown away. The energy that was put into their performance was matched by the slew of fans tossing themselves over the barricade. Lead vocalist Levi Benton dominated the stage with his robust voice and continuous movement that had everyone thrashing in the crowd. Miss May I also welcomed the talented saxophone player from Maryland, Saxl Rose or Tony Hancock, who accompanied them on stage and brought a new jazzy sound to their music. Towards the end of their set, concertgoers shoved each other towards the barrier as Benton hopped off the stage and onto the barricade giving fans a chance to sing along with him.

From Shadows Inside, “Lost In The Grey” was released as the first single and music video:


The final supporting act of the night was Knocked Loose and with the energy the crowd offered them, you’d be surprised if they were lively enough for August Burns Red. The Kentucky natives have a brutal, hard-hitting sound that surely separates them from other metalcore bands. Knocked Loose has such great enthusiasm when performing that it reflects onto the crowd. Fans were glued to the barrier from the force of others pushing towards them in order to make more room for people moshing in the pit. The overall energy in the room was intense and the flow of people crowd surfing over the barricade was at a rapid pace. The band’s recent album A Different Shade of Blue is much heavier than their last and features endless guitar riffs and punchy vocals that is worthy of praise.

The last track softly playing in between the set change faded out as the lights in the room disappeared and the crowd began to roar. August Burns Red claimed their spots as the backlit stage illuminated the room, casting the members as silhouettes. Eager fans rushed towards the barricade and the crowd-surfing began immediately after their opening track “Thirty and Seven” began. August Burns Red are like no other band that I have seen before. The passion that they have for their music is unbelievable and you can just tell by witnessing them live.

From their eighth studio album Phantom Anthem, check out the music video for “Dangerous:”


Lead vocalist Jake Luhrs has a special kind of presence that represents how much he can get into performing. The band as a whole is committed to entertaining others and their music certainly does just that. After playing Constellations in its entirety, the band got everyone in the Christmas spirit by performing a couple of their instrumental holiday songs. All were merry and bright as the band closed the night with their heavy hit “Composure.”

Fans let out all of the energy that they could possibly exert until the conclusion of the song and everyone was going wild. August Burns Red expressed their gratitude for the fans that they’ve gained over the years and made it clear that they would not be here without them. This metalcore band is one that you certainly MUST see live. Their performance was flawless and packed with excitement and I am eager to see them again soon.