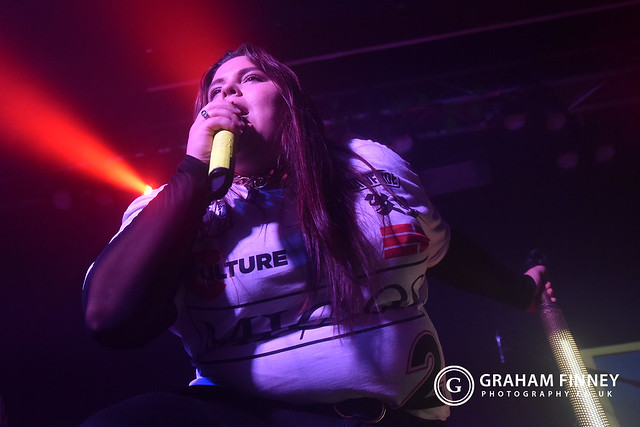 At the moment, things are very good for Doncaster band Bang Bang Romeo but, when their debut drops next month, things are only set to get better. The band, who have just come off the back of a stadium tour this Summer supporting P!nk, are setting things up for the release of their incredible debut album a Heartbreaker’s Guide To The Galaxy next month by heading around the country on a pretty much sold-out UK run. Tonight, by the time the band take to the stage at the Belgrave Music Hall in Leeds, the place is absolutely rammed to the rafters and, you have to say, deservedly so.

The thing is, even when the band walk out on stage to a sight like this, vocalist Anastasia, still has that look of disbelief on her face. There are fleeting moments throughout the set where she looks like she still can't believe her band are playing to sold-out venues across the country. However, if you've seen the Yorkshire band live already, you'll know how this is a very special band who deserve to be playing sold-out venues. No matter how magical it is to witness songs like the stomping "Shame On You" in venues this intimate, Bang Bang Romeo are a band who write the kind of pop rock songs that are built for massive venues. Songs like “Cemetary” and “You Scare The Love Out Of Me” are huge and fill every last space of this packed room. Their re-working of Four Non Blondes hit "What's Up", is a crowd-pleasing slice of pop-rock while their new single "Love Yourself (featuring Example)" is played to a room illuminated by a couple of hundred mobile phones. As for the band, they're only heading one way and, in vocalist Anastasia, they have a confident, assured centre piece for the band with a stunning voice to match her infectiously cheeky personality.

Seventy-odd minutes later and the band finish the night with an absolutely stunning rendition of "Adore Me", the kind of rock ballad that deserved to be heard in places much bigger than this. It's a jaw-dropping finale to an unforgettable night from an incredible band who, when their debut album drops in a few weeks, will see their career (pun fully intended) explode!