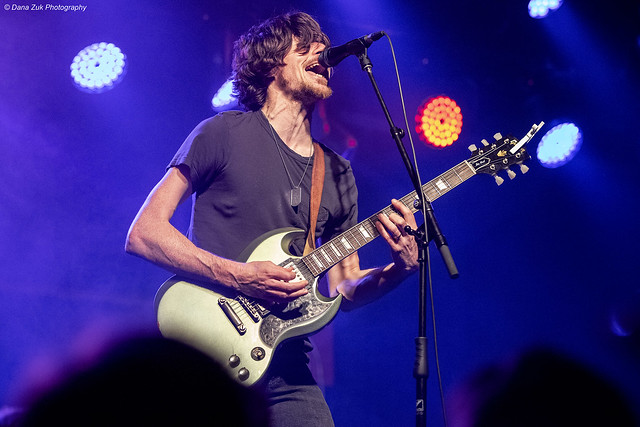 Many rock lovers of Alberta’s capital flocked to The Starlite Room to catch the buzz on Black Pistol Fire late Tuesday evening. The rumble caused by this event, deep in the heart of downtown Edmonton served its purpose, warding away the gloomy moods brought on by the persistent rainy weather that the city has been having as of late, and replacing those dreary moods with brightness and a hunger for rock n roll.

Edmontonians were seen lined up around the block, eagerly waiting to step foot into the historic concert hall. Kicking off the night, rap duo Blackillac had the room loose and feeling the groove. The pair laid down numerous rhymes which left the audience cheering and hollering for more. Despite the genre difference, Blackillac was well received and brought the heat to the Starlite Room, truly making this an eclectic event.

Black Pistol Fire was next to take the stage. The room stood still, thick with haze and anticipation. Through the backlit silhouettes on stage, the powerhouse rock duo burst into “Suffocation Blues,” immediately leading to the room hopping and dancing around, which only intensified as the guys slammed into “Pick Your Poison” next, to which the crowd joined in and began singing along to every word with frontman and guitarist Kevin McKeown.


Kevin was a particular sight to behold at this gig; between his bouncy singing and playing, the monstrous leaps he would take off of drummer Eric Owen’s kick drum were just as entertaining as the music pouring out of the amplifiers. He single-handedly had the audience in awe and kept the room at full attention throughout the night.

The two rockers rolled on through their twelve-song set, hammering through classics such as “Lost Cause,” “Hipster Shakes” and “Speak of the Devil,” along with a handful of sing-along covers, the best of which being “Sympathy for The Devil” by The Rolling Stones which naturally lead to classic call-and-answer singing between Black Pistol Fire and their audience.

Finally, bringing this energized evening to a close with their song “Bully,” Eric and Kevin both took a moment to thank their Edmonton audience by exchanging fist-bumps and high fives with the folks at the front of the stage and promising their return as the pair made their way off stage. Many concert-goers could be seen leaving the building with smiles on their faces and expressing the positive impression Black Pistol Fire had left them with, making this a memorable night for The Starlite Room and for Edmonton rock fans.