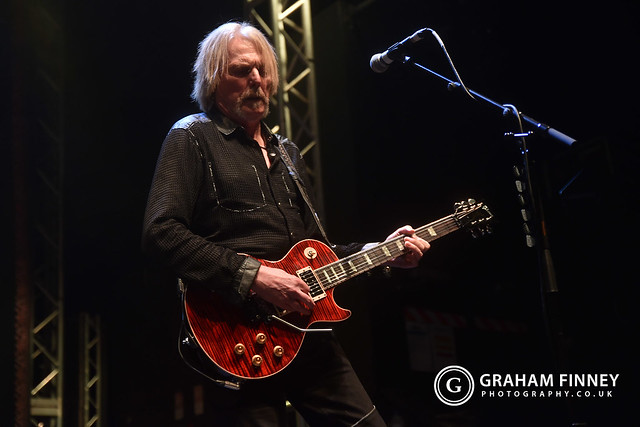 The rockers are out in force tonight for the arrival of Black Star Riders who are touring in support of their recently released new album Another State of Grace. Early doors mean an early finish, which is great for everyone concerned on a Saturday night, but it does mean that many punters are still queuing up or fighting their way to the bar when openers Wayward Sons hit the stage.

Still, when you’re fronted by a Brit rock favourite like Toby Jepson, Wayward Sons have no problems getting fans up and dancing as they kick into their high-energy classic hard rock. Supporting their new album The Truth Ain’t What It Used To Be, the band only have thirty short minutes on stage but, aside from promising to be back in 2020 with a headline tour, the band also make sure their set is filled with bangers like “Jokes On You” to make sure this evening is kick-started in the right way.

You’re know you’re in for a bangin’ night when Wayward Sons break out rockers like “Jokes On You”:


Midlands rockers Stone Broken take to the stage but a mere minute in and the band are hit with the kind of technical problems that bring their set grinding to a halt. A few awkward minutes later and the band are back on stage with frontman Rich Moss joking “we’re not going to do a Volbeat on you.” From that point in, the band cruise through their set to an audience who, judging by the reaction to Moss’ questions, contain more than a fair few Stone Broken fans. Taking fans back to their recently re-issued debut for tracks like “Wait For You” as well as tracks from their recent album Ain’t Always Easy, the Midlands band rocked through to the end of their set without any further issues.

Despite technical issues, Stone Broken always show that things are “Worth Fighting For”:


Black Star Riders frontman Ricky Warwick is a rock n’ roll warrior. With a “Belfast” sticker plastered across one guitar and “Rock N’ Roll War Machine” on another, you could say that the die-hard rocker is more than a little bit proud of his roots. Now, given that to his left is Thin Lizzy guitarist and rock icon Scott Gorham, makes him the perfect voice for this band of rock n’ roll heavyweights.

Touring in support of their brilliant Another State Of Grace, the band, completed by Robbie Crane, Chad Szeliga and Christian Martucci, rock the life out of the O2 Academy. Blazing through the likes of “Testify Or Say Goodbye,” Warwick spits out his lyrics with that gruff, throaty Belfast attitude while Gorham powers through each track with sickening ease. Still, given the number of hours these individuals must have racked up playing in venues across the world, it should come as no surprise that the band make light work of nights like this one.

Wearing their passion proudly on their sleeves like a well-worn tattoo, Black Star Riders are the real deal. Cut them and they bleed rock n’ roll which, I’m sure you’ll agree, is exactly the way it is supposed to be.

Need further prove that Black Star Riders are the real deal? Here’s the title track of their new album “Another State of Grace”: