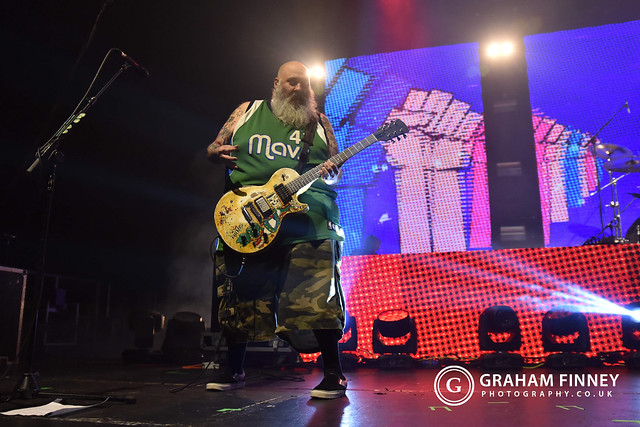 Band Links:
Whoever thought pop-punk had run its course clearly hadn't sent that memo out to the fans packed into Victoria Warehouse in Manchester. Sold-out two months in advance, fans young and old were here to party and there couldn't have been a better host in Bowling For Soup.

First up were Texan three-piece Not Ur Girlfrenz who are managed by BFS frontman Jaret Reddick. The three girls have bags of energy and, extensive touring including a stretch on the Warped Tour have given them bags of confidence on stage. Even a slightly muted response to some of their banter doesn't hamper their efforts but with new offerings like "Game Over" and rowdy covers of My Chemical Romance's "I'm Not Okay" and the Spice Girls hit "Wannabee", the three Texans are doing themselves no harm with gigs like these.


Back to the early noughties now with the utterly wonderful Simple Plan. A band who needed no introduction to this crowd, the way Pierre and Co. bounced around the stage, Simple Plan owned the place. Fun was the name of the game here and Simple Plan’s set had that by the bucketful. Inflatable beachballs, crowd-surfing drummers and even Scooby Doo themes, Simple Plan know how to put a smile on the face of any crowd.

As for the songs, this was noughties pop-punk at its most glorious. Fans of all ages sang along to “Addicted”, “Shut Up”, “Welcome To My Life” and “Just A Kid”. The band saved the best until last though as Pierre started a solo rendition of “Perfect” before the band joined him and their set ended in riotous fashion as drummer Chuck launched himself over the crowd. You could say it was the perfect way to end the perfect set.


You’d think by now the jokes had worn off with Bowling For Soup but this sold-out run of shows proves that this love affair we have with the four Texan jokers is far from over. Part of the beauty of it all is that nothing changes and you get exactly what you pay for. The intro is the same, the banter is the same crude almost toilet level gags and the songs, they’re all three-minute slices of beautifully crafted rhymes. Songs like “Suckerpunch”, “The Bitch Song”, “Girl All The Bad Guys Want” and recent single "Alexa Bliss", the hits just came pouring out with fans of all ages singing along.

The Bowling For Soup show is a riot from start to finish. Fans joined them on stage, the band threw in a few covers and, if things got a bit too much, there was a full bar on stage, complete with singing barman, to serve up and drink or two. Mums, Dads, Brothers, Sisters, Sons, Daughters, families of all generations pack out the Victoria Warehouse showing the mass appeal of this band. The band repay their loyalty by giving them one hell of a party on this cold Thursday night in Manchester and it’s a party these fans won’t forget for a long time.