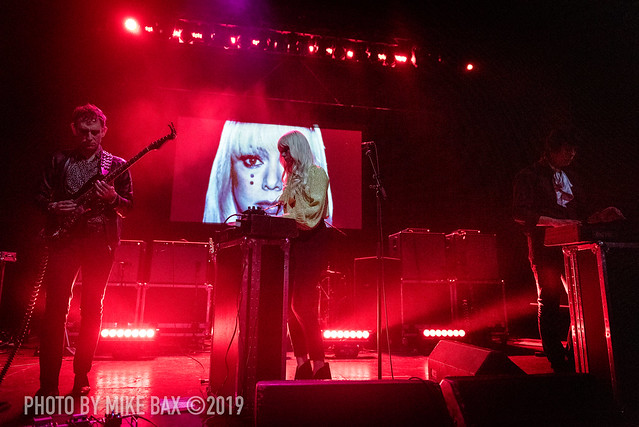 It would easy to describe this Chromatics Double Exposure tour as a touring act of moody music featuring four bands that all live on the same label. Perhaps that’s what some people in the audience walked away thinking. What I saw this evening was a performance drenched in aesthetic.

Upon walking into the Danforth Music Hall, the first indication that this night was going to more than just a mere live show was the merchandise booth. $5 CDs; $20 Vinyl; $25 Shirts; Customized tour posters; all adorned with neon signage advertising what was available and the low prices attached to everything on display. There had to be 8-10 different vinyl albums available. There were racks of attractive label-designed shirts on racks on either side of the merchandise table. And there was a line-up to buy products from this booth for the entire evening. I’m betting they sold more merchandise than most touring bands - and it was all thanks to an eye for detail on behalf of the groups and their respective label, Italians Do It Better.

The merch table was almost as busy as the concert venue’s floor.

As fans walked into the venue, LED screens on either side of the stage randomly flashed different graphics, lyrics, and photography centered on all of the bands, their respective cinematic interests, and David Lynch-style quotations typeset in bold lettering lifted from the band’s songs and the Twin Peaks show itself.

Toronto natives, but Montreal-based band Tess Roby opened the evening. Tess, along with her brother Eliot Roby, filled the venue with some utterly sublime mood music cast under minimal lighting with minimalist video effects flashing on the screen behind them. Some of the haunting sounds Eliot Roby managed to get out of his guitar were utterly mind-blowing. We got to hear five tracks and Roby thanked the patrons in the room, Johnny Jewel and the Italians Do It better label before leaving the stage.

From Vancouver, B.C., Italians Do It Better labelmates In Mirrors took the stage next, mesmerizing the room with a hypnotic blend of Krautrock, and post-punk - with Jesse Taylor on vocals and keyboards along with a drummer and additional keyboardist/guitarist. Their material buzzed with moments that lifted from bands like Gang Of Four and some of the heavier Joy Division bass-lines. Cast under almost no front lighting, the band members swayed along to their heavy beats and synths to sheers of approval from the audience. Jesse Taylor took a moment to praise the Danforth Music Hall as a beautiful venue and stated that Vancouver had nothing like it.

Check out Desire’s “Under Your Spell” with an accompany montage of scenes from the movie Drive:


Desire’s Megan Louise, Johnny Jewel, Aja (from Heaven, also on Italians Do It Better) and drummer Nat Walker took the stage next - with Chromatics’ Johnny Jewel doing double duty performing with Desire and Chromatics. I’m sure I wasn’t the only body in the room that got exposure to both Chromatics and Desire courtesy of the ultra hypnotic soundtrack to Nicolas Winding Refn’s film Drive. The band didn’t disappoint in the slightest, performing “Under Your Spell” as their final song after an incredible live cover of New Order’s “Bizarre Love Triangle.” Frontwoman Megan Louise performed in a shiny skin-tight red and black outfit that fits right in with their musical style and the red and blue lighting that back-lit the band throughout their performance.

This evening was the first Chromatics performance in Toronto, and this tour marks the first public concerts the band has done in over five years. It’s my understanding that the last time Chromatics performed on stage, it was for the filming of their Bang Bang Bar appearances in David Lynch’s Twin Peaks. Johnny Jewel was back on stage once again, along with Adam Miller, Ruth Radelet and drummer Nat Walker.

Vocalist/guitarist Ruth Radelet was moved to tears after performing her stunning rendition of Bruce Springsteen’s “I’m on Fire,” as she submitted to a thunderous roar of applause after the song was done. The band opened their performance with “Tick of the Clock,” another prominent song from the Drive soundtrack. Other standouts from their performance this evening were “Back from the Grave,” “Cherry,” “Hey Hey, My My (Into the Black)” (Neil Young & Crazy Horse cover), “Shadow” (from Twin Peaks), and a flawless cover of Kate Bush’s “Running Up That Hill (A Deal With God).”


By the time the lights came up, this felt to me more like a touring BRAND and less like four touring bands. The entire night had an air of moxy that elevated everything beyond a mere live concert. The whole show featured cool films/vignettes directed by Johnny Jewel that were projected onto the front of the bands and a hanging backdrop film screen just above and behind the drummer all handled/mixed live by artist Danny Perez (Antibirth, Panda Bear).

This performance was something mysterious and cinematic at a cost to the consumer that was a fraction of what an evening in a larger venue would run. It must be stated that Chromatics partnered with PLUS1 for this “Double Exposure Tour,” and $1 from every ticket sold went towards helping local teachers and classrooms get the supplies and resources they need to deliver education that every child deserves.

Step out of the “Shadow” and get to know Chromatics today: