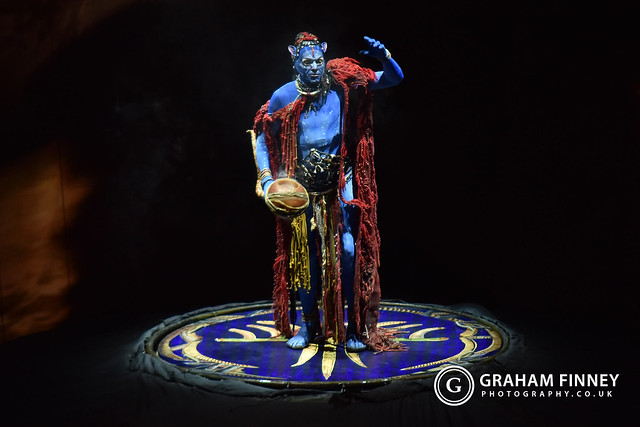 Based around James Cameron's Avatar, Cirque Du Soliel brought Toruk to life at the Manchester Arena with an utterly spellbinding display which saw the show heading in a different direction to some of the recent spectacles they have put on. Known the world over for it's heart-in-mouth acrobatics and awesome gymnastics, Toruk showed the Cirque Du Soliel performers in a different light and, while it may not have been the most heart stopping of shows, visually, it was possibly the most stunning.

Whereas at previous Cirque Du Soliel shows, the set-up was "in the round", giving performers the opportunity to interact with the crowd, from our vantage point halfway up the arena, you soon began to realise why the entire floor was empty as the house lights dimmed and the entire floor of the arena turned into one massive projection as the performers made their enterance. From that point on the floor of the arena was awash with projections from water scenes to earthquakes, as the story of Toruk unfolded.

Yes, you could level the argument at Toruk that it wasn't a show that had you on the edge of your seat for two hours however, on the otherhand, it was a show that you felt truly immersed in thanks to the stunning visuals and the equally wonderful costumes. Unlike some of the previous Cirque shows, the story, which tells the tale of three teenagers (including a pair of brothers) trying to save the Na’vi people from the looming threat of the winged monster known as Toruk, is easier to get to grips with, especially if you're a fan of Avatar so, while there isn't as many heart-stopping moments, for the visualists out there, Toruk is probably one of the most impressive Cirque shows you're likely to spend your money on.