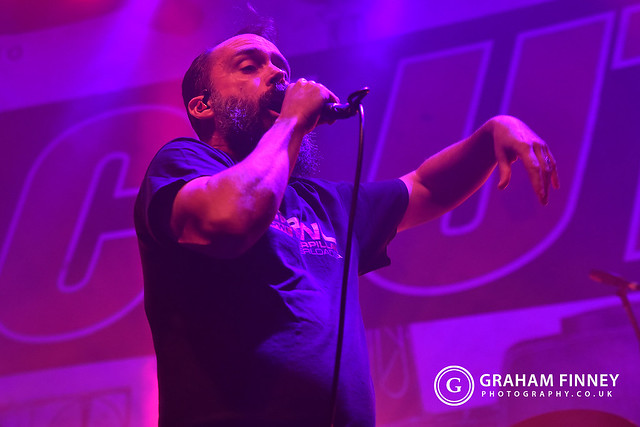 Just a few hundred yards from the O2 Academy in Leeds, thousands of shoppers were doing their last-minute Christmas shopping while the thousand or so fans packed into the venue for this gig had either done it all months ago or were going to be seen panic buying around Leeds while nursing the massive headache they were going to take away from the magnificent riff fest put on by headliners Clutch.

Listen back to when we spoke to Clutch earlier in the year at Download Festival:


Rattling the walls of the venue with their sludgy grooves, Clutch are simply fantastic tonight and the perfect way to say goodbye to what has been a pretty shitty year everywhere. Politics, the state of the planet, financial concerns, whatever, those concerns were left at the door as fans of all ages lost themselves in a glorious wall of riffs. This was exactly what was needed as Clutch battered through their full throttle, no-frills set with the likes of “Mercury” and “Vision Quest” do exactly what they set out to do. The Sabbath-inspired musicianship washes over this hypnotized crowd while Neil Fallon puts in an equally weighty vocal display.

With Per Wiberg from support act Swedish groovers Graveyard joining Clutch onstage for “You Can’t Stop Progress” and “Mice and Gods”, this really was an excuse to let your hair down and get your festive groove on and, let’s be honest here as well, for us rockers, there couldn’t have been a more perfect night to head into the Christmas period.

Clutch’s Book of Bad Decisions was released on September 7th, 2018, via Weathermaker Music: