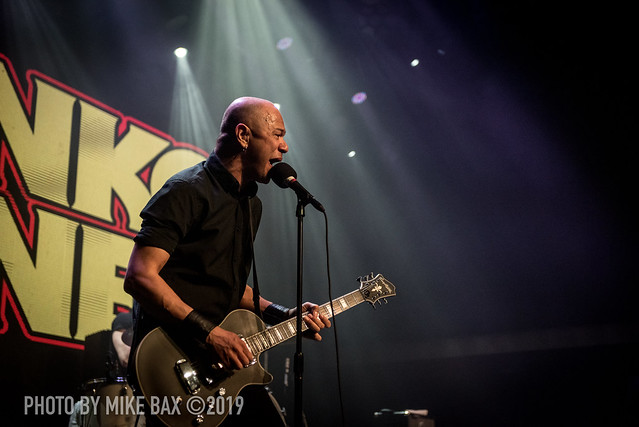 This evening was like the cherry on top of a great evening of rock n’ roll in London, Ontario as fans made their way over to the London Music Hall after the Godsmack, Volbeat and Stitched Up Heart show earlier this very same evening at Budweiser Gardens. (Our review and gallery of photos from that show may be seen and read here.) Even Danko Jones himself made this very same trek; he performed “Black Rose” with Volbeat only a few hours earlier, and then headed back to London Music Hall for his band’s headlining gig. Ensure you check out our exclusive interview with Danko from earlier this month.

Danko Jones strode out on stage at 11:15 pm and launched into “I Gotta Rock,” setting the mood in the room immediately as everyone in the venue pushed their way up closer to the stage. Tonight’s Danko Jones show was one of a handful of local performances where the band got to road test a few of the new tracks from their recently released new record A Rock Supreme. We got to hear “I’m In A Band,” “We’re Crazy,” “Lipstick City,” “Dance Dance Dance,” and “Burn in Hell” for the first time live this evening. The new material fits in with the favourite hits from Danko’s back-catalogue perfectly, as the band wound up the London crowd into a frenzy.

It’s time to get up and “Dance Dance Dance!” Check out Danko Jones’ latest music video from A Rock Supreme.


The combined might of John Calabrese, Rich Knox and Danko Jones is truly a musical force to be reckoned with. As the three-piece band worked their way through song after song of fist-pumping hard rock anthems, you could actually feel the energy in the room continue to heighten as each successive song got added to their eighteen-song performance. Perhaps it’s a good thing Danko Jones spends most of their time touring the rest of the world as it makes these local shows THAT much more special when they happen. A Rock Supreme indeed!

Danko Jones’ latest album A Rock Supreme was released on April 26th via Rise Above Records.

The band did not forget to play “My Little RnR” on this night, from their previous album Wild Cat.