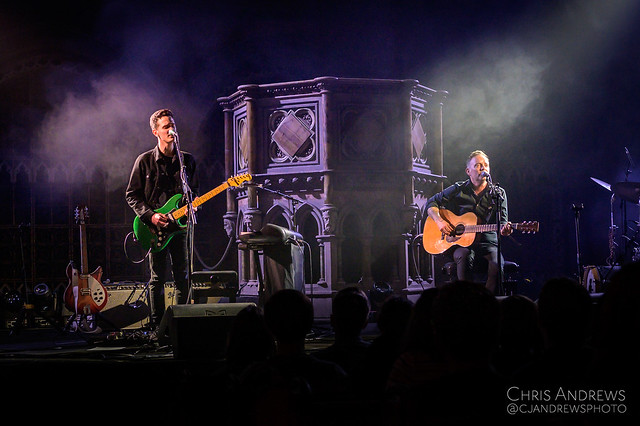 Having already been around Europe once in support of last year’s Kick (we caught him in London back in May), this time around Dave Hause is taking a somewhat different approach to his stripped down tour. Playing solely at churches and cultural centres, his streamlined line-up includes multi-instrumentalist, joint songwriter and brother Tim Hause, with Matt Olsson (of Hause’s regular backing band The Mermaid) joining dependent on each song’s demands. Tonight’s venue is the beautiful Union Chapel in Islington, London.

Opening the night are Northcote, who line up as vocalist and guitarist Matt Goud accompanied by Stephen McGillivray on guitar. Goud’s voice perfectly matches the tone of his music; just the right level of gruff to bring a level of authenticity to his wistful and often heart-breaking acoustic folk, sounding particularly haunting when hitting the higher notes in “Leaving Wyoming”. McGillivray’s guitar is shimmering in the background heavy with effects, and adds just enough body to elevate the performance beyond a solo acoustic one. The crowd tonight are utterly captivated by Northcote’s performance, if somewhat unfamiliar with the music, and when Goud ends by saying “We really hope we'll be back real soon”, you know the audience agree.

Immerse yourself in this acoustic version of “Leaving Wyoming” to get a taste of Northcote’s sound and spectacular voice:


The crowd tonight are warmed thoroughly by a mixture of Northcote’s brilliant opening set and mugs of coffee and hot chocolate spread amongst the punters in the pews packed from front to back of the stunning room. Entering the stage with Tim, Dave Hause launches into "Paradise" from Kick, with both Hauses on guitar for this number. Such is the flexibility in their set and the ability of the performers (including when Olsson joins them) that a mixture of twin guitars, piano, brushed drums, harmonica and xylophone is employed tonight across the three members on stage.

Hause’s tales between songs are equal parts entertaining and heart-wrenching, speaking openly of the troubles of his past and the inspiration behind some of his more personal tracks in “Bricks” and “Bearing Down”. Following the conclusion of the former track an audible “Wow” can be heard from the audience as those in attendance express their awe at what is a flawless and fitting show for the room. It’s just one example of what has been an emotional evening filled with love, with Hause demonstrating his extraordinary ability as a performer to feel like he’s playing just for you, even in a venue holding over 700 people.

One of the more memorable moments of the evening is late in their set when Hause and band are joined on stage by Goud and McGillivray of Northcote for a rousing cover of Brandi Carlile’s “Hold Out Your Hand”, with the audience loudly singing along and claps echoing around the historic room. Later, when concluding their encore with Kick’s opener “The Ditch”, the reception is one of adoration for an exceptional show by an incredible artist. Tonight, the Hauses, Olsson and Northcote have all performed to a level worthy of this magical venue, and hopefully both will be back “real soon”.

Dave Hause released Kick on April 12, 2019 and you can pick up your copy here.

Dave Hause’s acoustic recording of “We Could Be Kings” is a perfect example of his talent as a songwriter and performer: