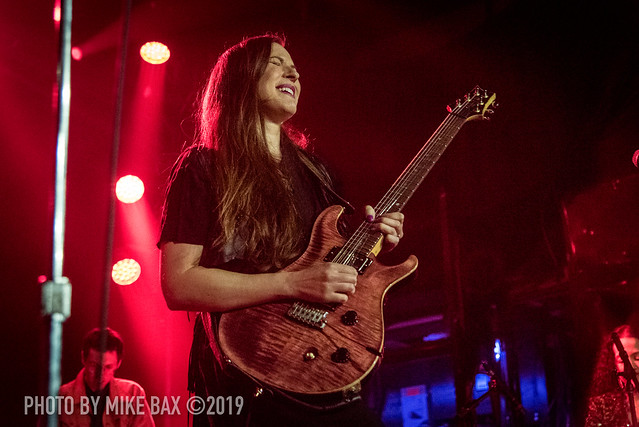 There are few things better on this planet than watching a talented band perform live on stage, am I right? In this evening’s case, virtuoso guitarist Donna Grantis along with Suphala (tabla), Rich Brown (bass), James Hill (keys) and Marito Marques (drums) made for an intimate jazz-infused electric guitar extravaganza as Grantis worked her way through the entirety of her recently released solo album Diamonds and Dynamite (released earlier this year via eONE Entertainment).

Grantis’ blistering guitar riffs were paired perfectly with the musical backbone provided via her incredible live band. For the encore, Grantis brought out Toronto artists SATE and then Shakura S’Aida to perform covers by Nina Simone and an original song co-written with Shakura before the show wrapped up and all of the musicians came out into the crowd to pose for photographs and sign autographs with fans willing to stick around afterwards and interact with the artists before departing.

Musically, the Diamonds and Dynamite album touches on multiple genres. It was recorded live-to-tape in only two days (a pace akin to that of many classic jazz albums) and delivers an experimentally adventurous tapestry of styles spread out over eight instrumental songs. There are moments of Frank Zappa-esque intricacy that pairs seamlessly with sublime tabla-percussion on album closer “Elsa,” a playful track that feels like the showpiece both on the album, and at this evening’s performance.

See and hear the skill of Donna Grantis with this live performance of “Trashformer,” live at The Bitter End on January 5th, 2019.


Pearl Jam guitarist Mike McCready brings his guitaring weight to both “Violetta” and “Trashformer,” two of the heavier songs on the album. Quotes from McCready can be found online professing his admiration for Grantis along with his appreciation for being invited to perform on the two tracks he’s involved with.

What was obvious this evening was that Donna Grantis is well-deserving of her reputation within the industry as a world-class guitar player. Every song on Diamonds and Dynamite quickly illustrates why the legendary Prince held Grantis in such high regard. Grantis is now best known for performing as co-lead guitarist with Prince in his iconic groups 3RDEYEGIRL and New Power Generation during the last five years of his life.

Everyone at the Mod Club this evening left in a state of euphoria. For a mere 20 bucks, that’s an increasingly rare thing indeed.

Donna Grantis’ Diamonds and Dynamite was released on March 22, 2019, via eOne Music Canada.