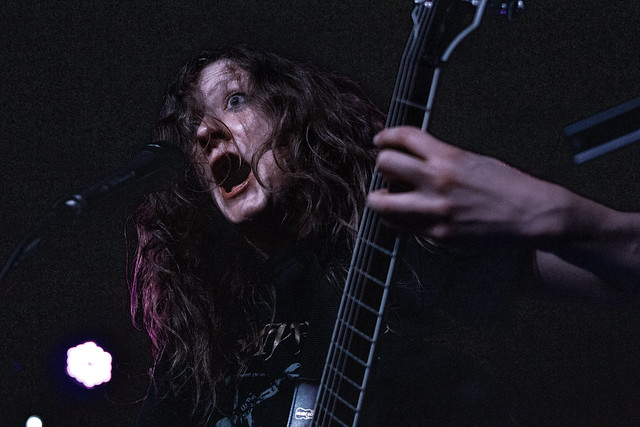 The day brought about high humidity and scorching heat, a common occurrence in the Kansas City summers. Downtown KC wasn’t hustling and bustling on this Sunday night, but there was still an energy in the air. Denver’s Dreadnought were making the last stop on their tour, promoting their newly released album, Emergence (purchase via BandCamp), a hard-hitting and emotive progressive metal venture that gained much momentum earlier this summer. Dedicated metalheads began to congregate outside The Riot Room, a well-known venue in the Westport area, where many popular and upcoming bands make their rounds.

The night would only consist of three bands, Gravelord, Existem, and of course, Dreadnought. Gravelord, natives to KC, took the stage with a surprisingly visceral set, bringing about a more heavy metal feel with a grotesque vocal arrangement. While their sound didn’t quite match the rest of the lineup for the show, they easily captivated the crowd in their own way with their heavy riffs and powerful stage performance. I hadn’t heard of them beforehand, but I suddenly became a fan and I will make sure to see more of their shows in the future.

Discover Existem with the video for their single “Descent:”


Existem, another KC native outfit, began soon after, playing mostly in the vein of a progressive and post-metal sound. Most of their set was instrumental with clean vocals taking the helm at surprising moments. Every band member had a chance at their own spotlight, with solos or moments where certain members would take the reigns and guide the rest of the group with their technical prowess. While I wouldn’t consider them psychedelic by definition, they definitely weren’t afraid to wear that influence on their sleeve. Somehow, this energy seamlessly transferred to Dreadnought’s set, with some surprises, of course.

While the opening bands were amazing in their own right, Dreadnought immediately stole the show, and rightfully so considering they were the headliner. Their presence on stage is an experience in itself. Their set was dark and eerie, matching their melancholic introduction and delivery throughout their show. Kelly Schilling (guitars, vocals) and Lauren Viera (keyboards, vocals) sent chills down everyone’s spine with their soft laden, subdued cleans. The heavy, doomy rhythms provided by bassist Kevin Handloni reverberated throughout the entire venue. This, backed by drummer Jordan Clancy, hypnotized every soul in the building up until the banshee-like screams filled the air.

From their latest album Emergence, here is the epic opening track “Besieged:”


I almost hit the floor when I heard these screams erupt from the stage. The atmosphere immediately shifted to dark and desolate. These are the sort of vocals you’d hear from a raw black metal band from Europe, let alone someone half my size. The rest of the night would swing back and forth from these two sounds, along with psychedelic intermissions and emotive, almost poet vocalizations. Hearing this band in a live setting added on to the already complex sound that is Dreadnought. Even more so was the opportunity to hear and see the flute and saxophone being played. I was reminded of when I had seen Rivers Of Nihil play months before with their saxophone player, but this was darker and even more emotive than that event.

This night brought about a different side to metal, a more personal experience but still heavy nonetheless. While Dreadnought did steal the show overall, as mentioned before, the opening bands still held their own and brought their own flavour to the event. I’m hoping to catch more of them, especially if they bring about new music for fans to listen to. The tour may be over, but Dreadnought is hoping to play more shows later in the year. If you have the chance to catch them, do it. They bring about an experience you won’t catch at regular metal shows. Their presence, atmosphere, and live sound are some of the best you’ll hear, hands down.

Dreadnought’s latest record Emergence was released on May 10th. View the cover artwork: