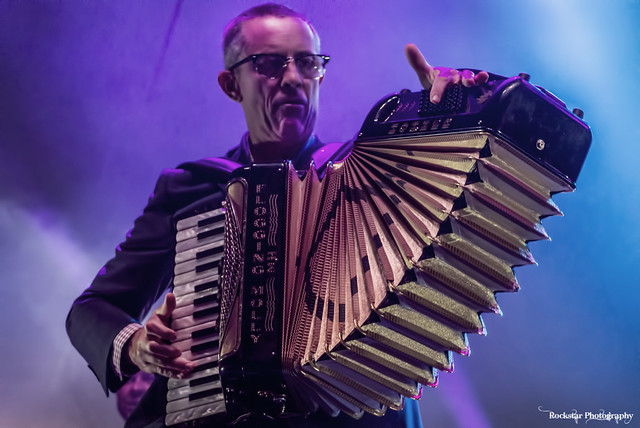 As the unofficial end to the Labour Day long weekend, Toronto was treated to a bit of a party at RBC Echo Beach as Social Distortion, along with Flogging Molly, The Devil Makes Three, and Le Butcherettes, made their only Canadian stop here on this 2019 summer tour. Another early start to a night of great music, with the venue doors opening at 5:30 pm. With more and more bands touring together, and concerts getting longer and longer, it’s almost gotten to the point where a concertgoer needs to take time off work in order to take in the entire show!

First on the bill was Mexico’s Le Butcherettes. Not being familiar with this band, I wasn’t quite sure what to expect. The singer and guitarist’s name is Teri Gender Bender, and she is a wild child. As soon as the first few notes of their first song blasted out of the amplifiers, it was as though someone flicked on a power switch. The band is full of energy as drummer Alejandra Robles Luna, bassist Marfred Rodriguez-Lopez, and guitarist Riko Rodriguez-Lopez are all really entertaining to watch, and sound fabulous to boot! Le Butcherettes’ first songs were “Give Up” and “Nothing But Trouble.”

“give/UP” is the latest video from Le Butcherettes, from bi/MENTAL:


Second up was California’s The Devil Makes Three. Another very cool group that I hadn’t heard of before that, much to my pleasure, turned out to be awesome. They were quite musically diverse, with instruments such as a stand-up bass, banjo, and even a mandolin all present on stage. With a bluesy, country, bluegrass sort of vibe, it didn’t take long until feet were stomping and beach dancing had commenced. Band members Pete Bernhard, Lucia Turino and Cooper McBean did an excellent job of keeping the party going strong. The Devil Makes Three’s first songs were “Hallelu,” “The Bullet,” and “Drunken Hearted Man.”

By the time Irish-American Celtic punkers Flogging Molly started their set, it had finally got dark outside and Echo Beach was starting to get packed. Singer Dave King who, by the way, used to sing for Fastway (a little trivia fact that I didn’t find out until tonight), wasted no time taking this beach party to the next level! As if there was some unseen gate that opened, a flood of crowd surfers began to float their way to the stage. It went on until the last note of the last song. Tonight’s bands brought quite an eclectic mix of fans, from hard rockers to punkers with giant mohawks, and all alike seemed to absolutely love Flogging Molly and their Celtic style of punk/rock. Dancing, drinking, awesome music, and an amazing atmosphere with great people made tonight into what every concert should be; fun!

“Life Is Good” at a Flogging Molly concert. Listen to the title track to the band’s 2017 album:


By the time that Flogging Molly had finished their set, the skies looked like something out of an Apocalypse movie! Lightning strikes were happening all around us, as the storm blew in off of Lake Ontario. Once the severe weather worsened, what everyone feared became reality. The concert promoter came out on stage and said, “I really hate to be ‘that’ guy... but... I’m afraid that due to inclement weather, we will have to end the show, and will everyone please exit the venue promptly.”

So... unfortunately there would be no Social Distortion for Toronto tonight, and just like that Flogging Molly became the night’s headliner. No word as of yet whether there would be any sort of make-up show by Social “D” but I’m sure it would make a lot of people very happy.

Life Is Good was released on June 2nd, 2017 via Vanguard and Spinefarm: