From PARKWAY DRIVE and SCORPIONS to RED METHOD and BATUSHKA; 12 Reasons BLOODSTOCK 2019 Rocked Us (Like a Hurricane) 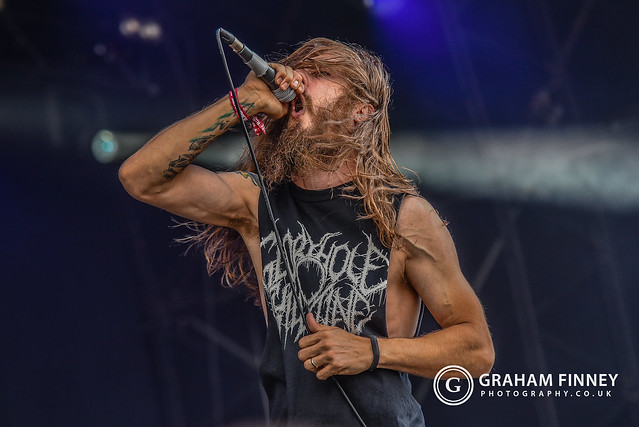 Bloodstock Open Air 2019 had it all. From the icons of heavy metal like the Scorpions, Dee Snider and Queensryche through to the New Blood acts like Widows, Sethiest and Grief Ritual hoping to kick start their careers here, Catton Hall was packed with metal fans who survived some torrid weather conditions for another unforgettable weekend.

With so many highlights from the likes of Brit metallers Krysthla making us proud to be British with their main stage debut to Bong Cauldron working our neck muscles with their cider-drenched sound to the suitably scummy Raging Speedhorn to the all out over-the-top insanity of Powerwolf, there was so much more to take away from Bloodstock than just a pair of wet wellies. Hardcore fans had the likes of Cancer Bats and Harbinger bringing the mosh while those who liked things a bit more extreme had Saturday night Sophie headliners Taake or Suffolks finest Cradle Of Filth to keep things harsh. As for the thrashers bands like Brit thrashers Xentrix and US groove metallers Incite made sure the neck muscles were loosened up for the weekend. With so much to choose, we've picked just some of the highlights that made our Bloodstock an unforgettable one.

01. We don't want Max Cavalera to ever change
- Whether it's his genre-defining back catalogue in Sepultura or the immense tribal metal of Soulfly, whenever the name Max Cavalera appears on a bill you know exactly what you're going to get and Bloodstock couldn't be more excited at that fact. Despite the dreadful weather, a huge crowd appeared by the Ronnie James Dio Stage on the Friday afternoon as Cavalera took to the stage with his brothers in Soulfly pummelling through a short set that spanned the Soulfly career. A God amongst metal fans, he banged his head, we banged ours, he jumped da fuck up, Bloodstock did the same.

02. Thy Art Is Murder - brutality at its best
- Human Target, the new album from Aussie deathcore band Thy Art Is Murder is one of the best heavy albums of 2019 so watching the band pummel through cuts from the album like "21st Century Death Squad" and "Make America Hate Again" was simply unforgettable. "Your weather is fucking shit" barks frontman CJ before offering every single person a visa back to Australia. With Parkway Drive heading into more mainstream waters, Thy Art Is Murder are making sure they're keeping the fire alive for brutal Aussie metal and, at Bloodstock, put in one of the highlight sets of the weekend.

03. KK Downing returning to perform live
- Judging by the number of Manowar shirts in the front rows, there is no doubting that the appearance of Ross The Boss was a highlight for many fans this weekend but, after a set crammed with heavy metal anthems like "Sign Of The Hammer", "Battle Hymn" and "Hail To England", the sight of former Judas Priest legend KK Downing joining Ross on stage to perform the likes of "The Green Manalshi (With The Two-Prong Crown) " and "Breaking The Law" not only had the masses banging their heads and throwing the horns but surely had even the most black-hearted of metal fans feeling just a little bit emotional. It certainly did for us!

04. Red Method are our new favourite band
- Formed from the ashes of British underground bruisers Meta-Stasis and The Defiled the London-based band smash together the best aspects of both bands into one crushing display. If their unrelenting blasts of crushing groove metal isn't enough to win you over their live show should have your jaw hanging around your knees. On the Sophie Lancaster Stage the band took us right back to the early Slipknot days with a chaotic, brutal performance that was simply flawless. Their new album For The Sick is out later this year and, on the evidence here, we expect Red Method to turn the UK metal scene into a jibbering mess just like they did to us at Bloodstock.

Check out our gallery from Day Two where headliners Parkway Drive were joined by Anthrax, Thy Art Is Murder and our new favourite band Red Method: 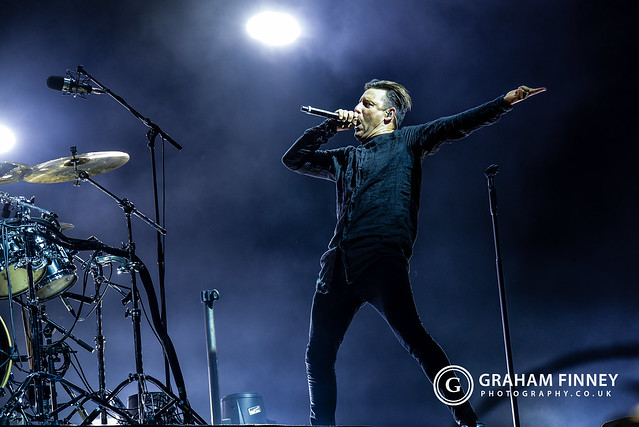 05. Sabaton amassing a War Ensemble
- With a stage set that looked something like a battlefield, Swedish power metal titans Sabaton laid waste to Bloodstock with their highly-anticipated headline set. The perfect band to headline a festival like Bloodstock, the Swedish band fired out tracks from their new album The Great War with the confidence of a band who are at the top of their game. The Bloodstock faithful lapped it up as a pyro-filled set shook the field and surely had the locals heading for the safety of their shelters. Speaking to people before the Bloodstock weekend, it seems that while their brand of polished power metal may not be to everyones taste, their live show has won them legendary status but, here on Friday night, Sabaton were playing to the converted and gave their army the perfect evening.

06. Old School Metal Represents
- One thing you get at Bloodstock that you don't get at some of the other rock festivals and that is the appearance of the legends of the genre. Bloodstock knows exactly where its roots lie and, as such, the Bloodstock crowd who turn up year after year are treated to some of the finest legends from the metal scene. 2019 was no different with the likes of Metal Church, Death Angel and Queensryche all landing well-recieved slots on the main stage bill this year and all of them proving that, while the new school is where it is at these days, that age old adage that "the old ones are the best" still holds strong these days.

07. Anthrax turn Bloodstock into a "Madhouse"
- After ongoing weather issues on the Saturday forced a temporary shutdown on the main stage, it came as no surprise to see the crowd absolutely lose their shit when thrash metal titans Anthrax kicked things off again. Absolute pandamonium broke out in the pit as the band blasted through classic after classic from "I Am The Law" to "Madhouse" with bassist Frank Bello and guitarist Scott Ian inciting mayhem from the gathered metal masses. You get exactly what you expect from Anthrax these days but it was still hard to tell who had the bigger grin on their face - 'thrax frontman Joey Belladona or the thousands of fans "Caught In A Mosh" in front of him.

08. Dee Snider sticking a middle finger up to the weather
- If any man was going to scare away the weather that man would be Twisted Sister frontman Dee Snider. The giant of a man strides out onto the stage dishing out a set mixed with his own solo material and Twisted Sister classics. Yes, the weather may have been shitty but I'm sure that, as soon as Snider launched into "We're Not Gonna Take It", things took a turn for the better while another classic from Snider's back catalogue, "I Wanna Rock", couldn't have been a finer "fuck you" to the weather as Bloodstock certainly did rock with Snider.

From moshing dinosaurs to mud covered pilots, here are some of the fans who rocked at Bloodstock despite the weather: 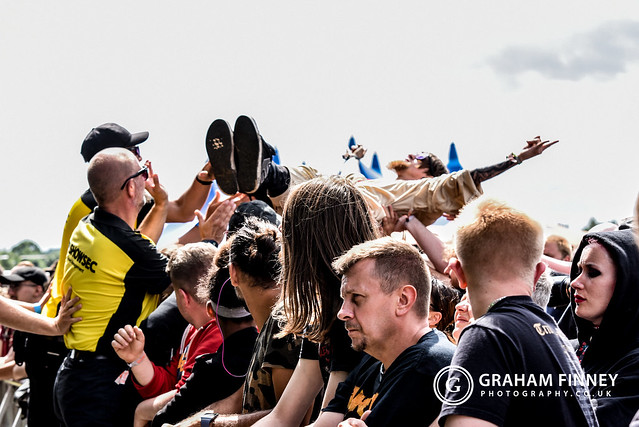 09. Parkway Drive slayed the doubters
- Internet forums went into meltdown as Parkway Drive were announced as headliners but, despite having to play a curtailed set, the Aussie metal titans showed every single doubter here that they were the perfect Bloodstock headliner. Sure the wind put pay to some of their pyrotechnical armoury but with heavyweight offerings like "Wishing Wells", "Crushed" and "Bottom Feeder", Parkway Drive flattened Bloodstock like they promised they would. Big things are expected of this band in the next eighteen months but, for their first UK headline appearance, the Aussie band made sure that they left the stage having gone down in history as one of the finest headline sets this festival has ever seen. Absolutely magnficent on every level.

10. Batushka leaving us confused and mesmerised
- Originally drafted in to replace Dimmu Borgir who pulled out of their special guest slot due to illness, weather problems saw the controversial Batushka shifted to the Sophie Lancaster Stage for their hugely anticipated set. Like many others we weren't sure what to expect and came away from their set scratching our heads and not quite sure what we had just witnessed but left this religious experience wanting to know more about a band who are as bonkers as they are unexplainably captivating.

11. The Wildhearts rocking the shit out of Bloodstock
- We had to admit that perennial Brit rockers The Wildhearts weren't our first choice of replacement for hardcore newcomers Code Orange but being such massive fans of the band, who are we to pass up the opportunity to see Ginger & co again? When the band took to the stage there were plenty of Wildhearts fans front and centre so, with just forty minutes stage time, the band raced through a set filled with well-travelled Brit rock classics like "Everlone" and "Vanilla Radio". They might have been a strange choice but, like Skindred last year, they came with the intention of rocking the Bloodstock crowd and did exactly that!

12. The Scorpions rock Bloodstock harder than any hurricane
- Given the ongoing weather issues, surely we're not the only ones to see the irony in the fact that two of the biggest hits for the Sunday night headliners are "Winds of Change" and "Rock You Like A Hurricane"? So, after four days, a hundred plus bands, beer, rain, thunder, stage closures, cancellations and anything else that could be thrown at the festival, Bloodstock Open Air 2019 came to a glorious finale with German rock legends the Scorpions. With Motorhead drummer Mickey Dee sat behind the kit, the German rockers plundered their weighty back catalogue to make sure that the thousands of fans who'd lived through every challenging moment of this weekend, went home talking about a magical end to this magical weekend. 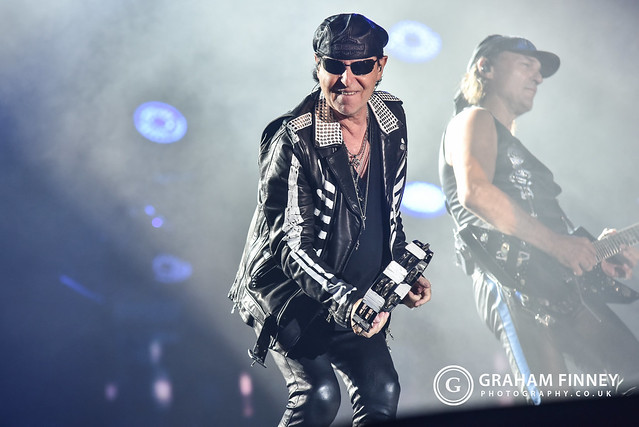 One of the regular games at Bloodstock in recent years has been the "guess next year's headliner" game. This year though, organisers kept the 2020 headliners well and truly under wraps however did confirm that Skindred, Vio-lence, Sacred Reich, Butcher Babies, The Black Dahlia Murder and Dark Tranquility will be slaying Bloodstock Open Air when it returns to Catton Hall in twelve months time. We're counting the days already.

Bloodstock will take place at Catton Park, Derbyshire from 6th-9th August 2020. Get info on ticket packages and additional information over at www.bloodstock.uk.com.
Share this: