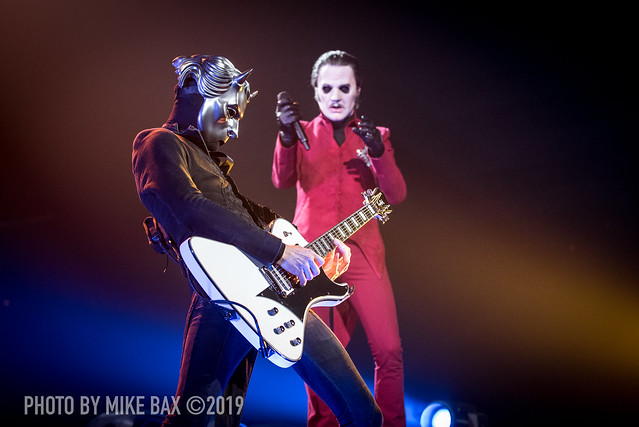 As ominous organ music echoed through FirstOntario Centre in Hamilton, Ontario, in the minutes leading up to the Greater Toronto Area stop on The Ultimate Tour Named Death, fans on the floor swelled closer to the stage. Many of the patrons at tonight’s performance were dressed up. They were sporting their own modified silver devil helmets, replicas of the masks worn on stage by the nameless (and faceless) ghouls that comprise the musical section of Ghost.

Fronted by Cardinal Copia (aka Tobias Forge), the eight-piece Swedish band worked their way through 20 songs perched atop a customized stage that fell somewhere between a Lady Gaga set and a church altar. The Cardinal changed his “investments” several times as the ghouls performed this evening, touching on material from all four of the band’s commercially-released albums.

A lot has changed since the release of 2010’s Opus Eponymous. Ghost has won the world over with their unique mixture of Abba-hell music, material that owes an immense debt of gratitude to Merciful Fate more than anything else. The members of Metallica and Foo Fighters all sing Ghost’s praises. The band won a Grammy for “Cirice” (from 2015’s Meliora), and have toured their way to their current status of being a headlining stadium band. This evening, Hamilton basked in the glory of Ghost as a headlining act, complete with VIP Upgrade options and 50 dollar tour shirts.

Released in 2016, watch the video for Ghost’s “Square Hammer:”


This evening’s ritual also saw the Cardinal (replacement for Papa Emeritus III) and his band of nameless ghouls launch into “Ashes” and “Rats” from their latest album, Prequelle. The Cardinal strutted his way from side to side of the stage, and then up front and centre via a stage protrusion that put him the closest to the audience.

Throughout the evening, the eight members of Ghost mixed music with stage pantomime as they performed. Copia rode about on a tricycle. “Devil Church” included a cool instrumental of Rush’s “YYZ.” One of the ghouls did a keytar solo as other ghouls highlighted his performance with a strutting fashion that reminded me of Fred Astaire doing “Puttin’ On The Ritz.” Things got theatrical.

Bottom line: The crowd loved it. Ghost has some killer songs, and seeing them all jazzed up over 90-plus minutes in this fashion was genuinely entertaining.

Released via Loma Vista on June 1, 2018, Prequelle is the band’s fourth album.