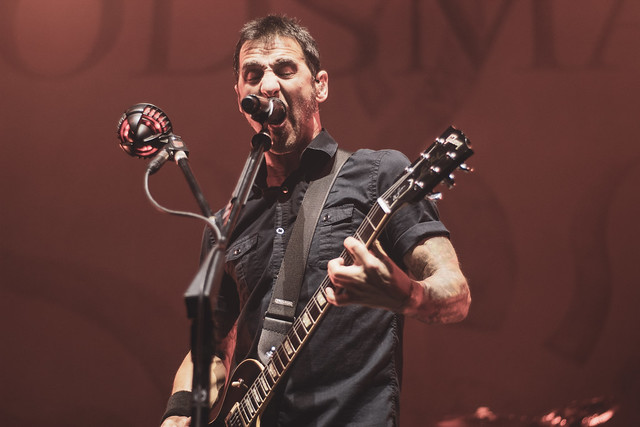 Godsmack, Halestorm, and Monster Truck celebrated the 27th year of Freakers Ball at the Silverstein Eye Center Arena on October 19th in Independence, Missouri. Every October, Halloween shows and the like raise up from the graves at many venues across Kansas City. Bands behind a serial killer or creepy moniker bring out their A-game with extravagant costumes and stage ensembles. With the abundance of these shows also springs up Freakers Ball, a Halloween extravaganza for rockers and some metal fans held by one of the local rock stations at some of the larger venues. Last year’s Freakers Ball was held at the popular Midland Theater with Ghost putting on over a two-hour performance for hundreds of people. The band and Halloween went perfect together and was one of my favourite shows of last year. This year went down a slightly different route, not really playing much on the Halloween theme, but more so being about the music and performance. Godsmack, Halestorm, and Monster Truck were the only bands on the bill but rocked the night regardless.

The festivities were held at the Silverstein Eye Center Arena, home to the Kansas City Mavericks ice hockey team, as well as other big concerts and events (even monster trucks!). This was my first time being inside the venue and I hope to go back again for other events in the future. Speaking of monster trucks, the first band to take the stage was the Canadian rock outfit, Monster Truck, that play in the vein of blues and southern rock. Their set was surprisingly high-energy considering the stoner rock influences sprinkled throughout their sound, and usually, the first band to take the stage can have some bad luck in getting the crowd energized. However, they were able to do this with ease, constantly interacting with the crowd and not holding back with their intensity. Their lighting and sound were surprisingly excellent, showing that the venue and those in charge of the event put elaborate thought into the celebration. With only three bands performing, Monster Truck were able to play for close to an hour before Halestorm took the stage next.

Monster Truck has a message for you: “Don’t Tell Me How To Live.”


Halestorm is a band that everyone ought to know, considering they’ve won some Grammy Awards and their music is played constantly on radio stations. This was my first time seeing them live, which honestly I regret to quite the extent considering how awesome their show is now. As the stage was being set, towers of lights rose from the back, and the drummer was set up higher than most of the band. The energy of the room was already tense (in a good way) as Lzzy Hale and the band took the stage and immediately began destroying the crowd. The sound was top-notch, as expected, along with a stage presence emitting that of legendary bands of the ‘80s and early ‘90s. There were times it felt like I was just staring at a meteor shower, while beautiful and elegant but also destructive and menacing at the same time. They played all their well-known hits, including “I Get Off,” “Do Not Disturb” and “I Miss The Misery,” with every single person in the crowd singing along in unison.

Halestorm’s performance ended, and quite honestly I felt that it would be tough to top that energy. However, I knew what to expect out of Godsmack as the headliner and figured they could easily hold their own. Their stage setup wasn’t as elaborate as the previous band’s, where one would consider them very minimalistic. Almost three-quarters of the stage was bare, leaving room only for the bare essentials of equipment, stands, and or miscellaneous items. Seeing a band of this caliber setting up in such a way is always nice to see once in a while. They rely on their music and energy to drive the crowd. This isn’t to take away from the previous performances by any means, but it shows a more humble side to the band that you normally wouldn’t see in similar situations.

If you’re feeling particularly “Vicious” today, then check out the music video for the title track to their latest record:


Godsmack finally took the stage, opening up with “When Legends Rise” from their recently released album of the same name. The venue was packed at the floor level at this point and seemed like even more people were showing up. Sully Erna and company were moving all over the stage and interacting with the crowd. Every passing second was tight-knit and never missing a beat. Even when the set slowed down with “Voodoo,” everything felt flawless. The band still remains mesmerizing even though this was the third or fourth time seeing them in a live setting over the years. I’d have to say that this was one of their best performances to date for sure.

Freakers Ball may not have played much on the theme of Halloween this year but it did bring a stellar performance by multiple bands. While they can be considered to be in the same vein of music (whether you call it radio rock, mainstream rock, etc.), every band brought their own feel to the stage and provided a unique experience. The venue also provided a lot of positivity, with seating for those who couldn’t stand for long periods of time but also leaving a lot of room for in front of the stage for fans to get a little rowdy and listen to their favorite music up close. I can’t wait to see what next year brings and hopefully see more of these bands in the upcoming months/years.

From their seventh record When Legends Rise, check out the music video for the album’s third single “Under Your Scars:”