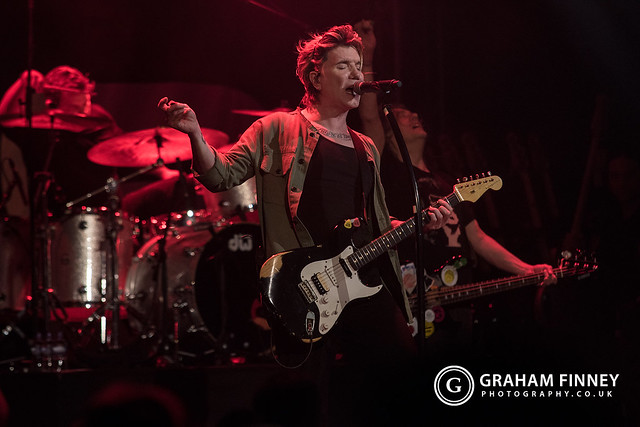 Squirming our way through the crowd in the O2 Academy on Saturday night, it’s fair to describe the venue as being rammed to the rafters. The reason they’re all here is for the return of American hard rockers Goo Goo Dolls who are in town on the latest date of their UK tour in support of their 2019 offering Miracle Pill.

The Dolls first visit to the UK in a couple of years and their first to Leeds since 2016 sees fans travelling far and wide to be here in Yorkshire on Saturday night. The Goo Goo Dolls, in return, treat those fans to a whopping twenty-one song set spanning not only new album (which is represented by four tracks) but also a slew of tracks reaching as far back as the mid-'90s.


The set kicks off with “Indestructible”, taken from the aforementioned Miracle Pill album. A perfect slab of high-energy hard rock, the opener made sure that, if the place hadn’t been steaming hot before, it was now hotting up very quickly. Of course, it wouldn’t be a Goo Goo Dolls show without that hit but the band made fans wait for that moment. Before that though, there was a stack to get through including new tracks like the title track, “Autumn Leaves” and “Life’s A Message”.

As for the back catalogue, there was plenty to choose from with the band rocking through renditions of “Naked” and “Better Days” as a prelude to the moment fans had been waiting for. Encore time saw the enormous rock ballad “Iris” with frontman Johnny Rzeznik almost drowned out by fans singing the hit single back at him. It was a glorious three and a half minutes of American hard rock brilliance and, with their hit “Broadway” bringing the night to an end, Rzeznik and bandmate Robby Takac made sure their return to Yorkshire finished on an even bigger high than it started.