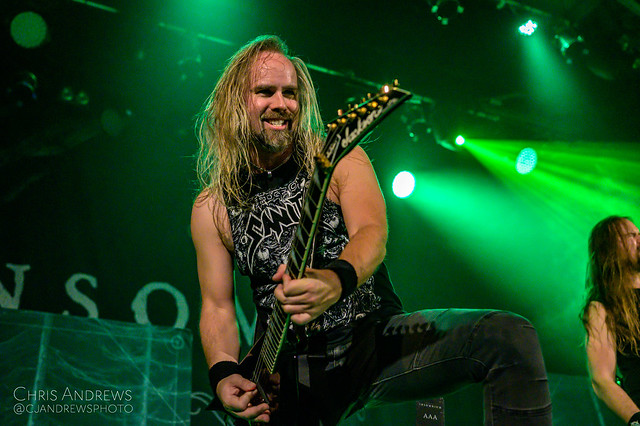 Following the release of their masterful eighth album Heart Like A Grave (2019), Insomnium are touring far and wide across the UK in advance of an even more extensive run in the U.S. and Canada later this year. They played the historic Islington Assembly Hall on January 19th, and I was there to witness it all.

Opening tonight are British up-and-comers Conjurer, whose half doomy, half breakneck, always savage take to the metal genre gets proceedings off to a loud beginning. The intertwining vocals of Dan Nightingale and Brady Deeprose are an audio assault combined with the incredible depth reached by the instrumental section of the band, and there are heads nodding in quiet appreciation from front to back. Nightingale impressively goes micless during some quieter passages of the music; it’s the contrast between quiet, almost shoegaze-esque portions to crushingly heavy riffs that is the hallmark of Conjurer’s quality. A hefty 40-minute set leaves some unprepared members of tonight’s crowd, who are expecting Insomnium’s finely crafted melodies, looking a little shell shocked by Conjurer’s sheer in-your-face brutality at times.

Entering the stage and launching straight into "Valediction" off last year’s Heart Like A Grave, Insomnium are greeted with a rapturous reception from tonight’s two-story audience. Jani Liimatainen, on his first London show as an official member, is clearly enjoying himself from the start, beaming with smiles and positivity as he sings of dark thoughts and despair. It’s a common theme throughout the band for their whole set; there is genuine chemistry between all members as Liimatainen and fellow guitarist Markus Vanhala bound either side of the stage around the towering centrepoint of vocalist and bassist Niilo Sevänen.

Try to stop yourself headbanging along to lead single "Valediction" off Heart Like A Grave. Spoiler alert: you’ll fail:


Even the usual Finnish stoicism of Sevänen is broken by the crowd’s reaction to the band’s performance, with smiles, horns thrown and even some friendly banter from bringing up rival city Birmingham sparking even greater response from the Londoners in attendance. Vanhala’s flawless lead guitar tone is on full display tonight, from the tapped riff of “Through The Shadows” to the solos of “Pale Morning Star,” and his accuracy and speed of playing is unaffected by the enthusiastic headbanging and throwing his guitar around his head in an incredible display of musicianship.

There’s no let-up to the energy on stage or the warmth from the crowd (headbanging is the norm rather than moshing) as the band tear through their set, departing briefly only to return to “While We Sleep,” likely now their best-known track, and close with title track and melancholic epic “Heart Like A Grave.” The roar which greets the band’s euphoric conclusion is testament to both the quality of music and showmanship on display this evening, and with an extensive set of dates booked around the world in 2020 and an incredible album to back them, Insomnium look to go from strength to strength throughout the year as masters of the melodic death metal genre.

Check out Insomnium’s extensive list of tour dates for yourself and make it to a show if you can.